Colombia vs Venezuela on Crime

The New York Times highlights today the increasing plight of violence that besets Venezuela. The headline couldn’t be blunter: “More Killings in Venezuela than Iraq.” It’s a gruesome reminder of what Hugo Chávez’s “Socialism of the 21st Century” has delivered to the Venezuelan people.


Some Venezuelan officials deny that there is a rise in crime altogether claiming it is part of a media campaign to discredit the government (they have coined the expression “media pornography” to refer to crime coverage, thus setting the semantic stage for censoring it). However, among the most plausible causes behind the national spike in crime, some government advisers point to an overall increase in violence in the region. According to this theory, not only Venezuela is suffering from a wave of bloodshed, but also other Latin American nations like Mexico and the Central American countries.


Still, when Venezuela is compared to neighboring Colombia, it becomes clear that there’s no such regional increase in crime. Just the opposite. Colombia, until recently one of the most violent countries in the world, more than halved its rate of murders in the last 8 years. Former president Álvaro Uribe and his policy of “democratic security” deserve due credit for such an accomplishment. On the other hand, Hugo Chávez’s Bolivarian revolution has delivered Venezuelans a jump of almost 50% in the murder rate in the last 10 years: 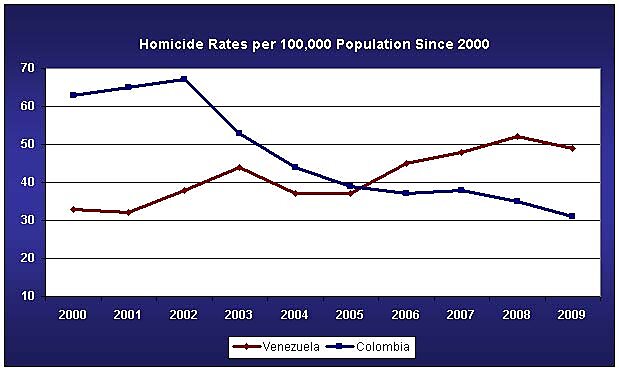 It seems that after Hugo Chávez, Venezuelans will need a president like Álvaro Uribe to clean the house.