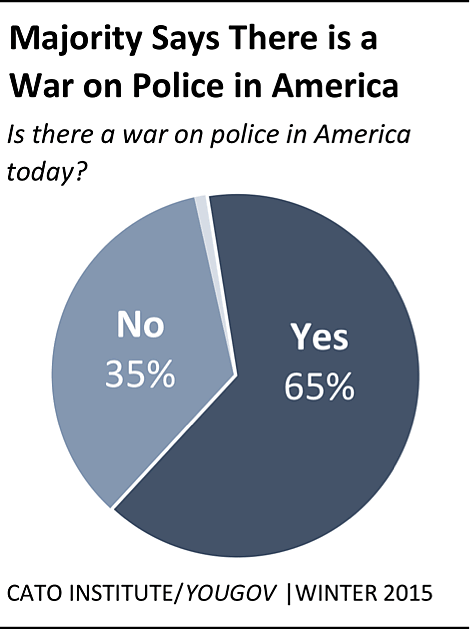 
While Americans are concerned about police safety, this does not mean they wish to avoid reform. Instead, Americans overwhelming support (92%) requiring police officers wear body cameras that would record video of their interactions. Moreover fully 6 in 10 “strongly support” such a proposal. A paltry 8% oppose police wearing body cameras. Support extends across demographic and political groups. In an era of hyper‐​partisanship, police wearing body cameras achieves rare post‐​partisan consensus.


Moreover, Americans do not view the police wearing body cameras as exclusively protecting citizens from the police. Instead, 81% believe such a policy will protect both—the police officers who wear them and the citizens who interact with the police—equally. Only 10% expect cameras to protect citizens more and 9% percent expect cameras to protect police officers more. While African‐​Americans and Hispanics (19%) are about three times as likely as Caucasians (7%) to say cameras will primarily protect citizens, overwhelming shares of all groups still say cameras will protect both members of the public and officers equally.


A truth too often overlooked is that public support for a policy is not synonymous with a willingness to pay for it. However in the case of body cameras, a majority—55%—of Americans says they would be willing to pay higher taxes in order to outfit their local police department with body cameras, while 45% would not support increased taxes for this purpose. Nevertheless, it is worth emphasizing that if support were contingent on raising additional revenues, initial support decreases a substantial 37 points.


Politics, rather than demographics, primarily drive attitudes toward tax increases for body cameras. Sixty‐​five percent of Democrats (including independent leaners) say they’d pay higher taxes in exchange for a police body camera program, while 35% oppose. Conversely, a majority (54%) of Republicans (including leaners) oppose raising additional revenues and prefer local governments redirect funds from other programs to pay for police body cameras, while 46% would favor. There are not significant differences across race, gender, and age. Furthermore, favorability toward the police does not correlate with support for raising tax revenues for cameras. 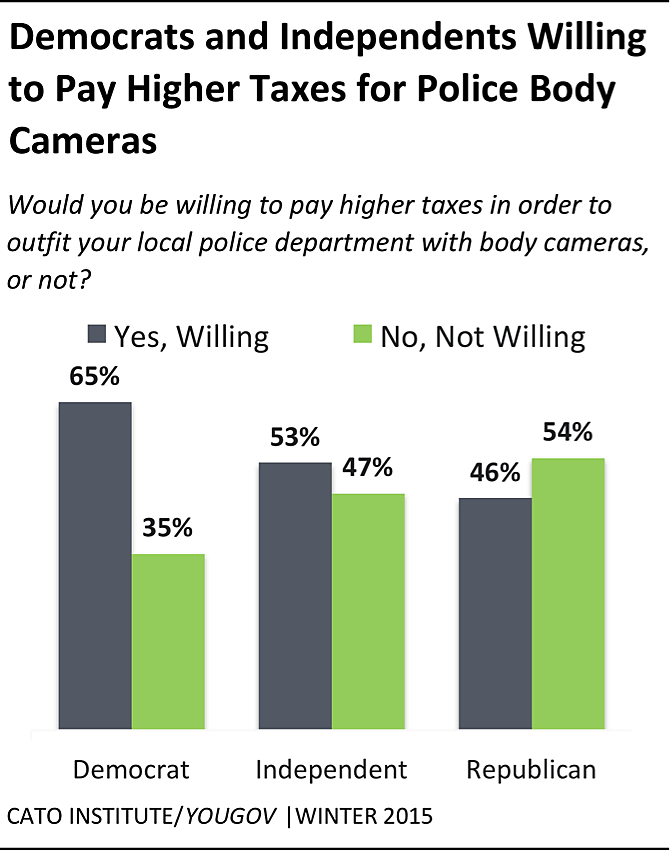 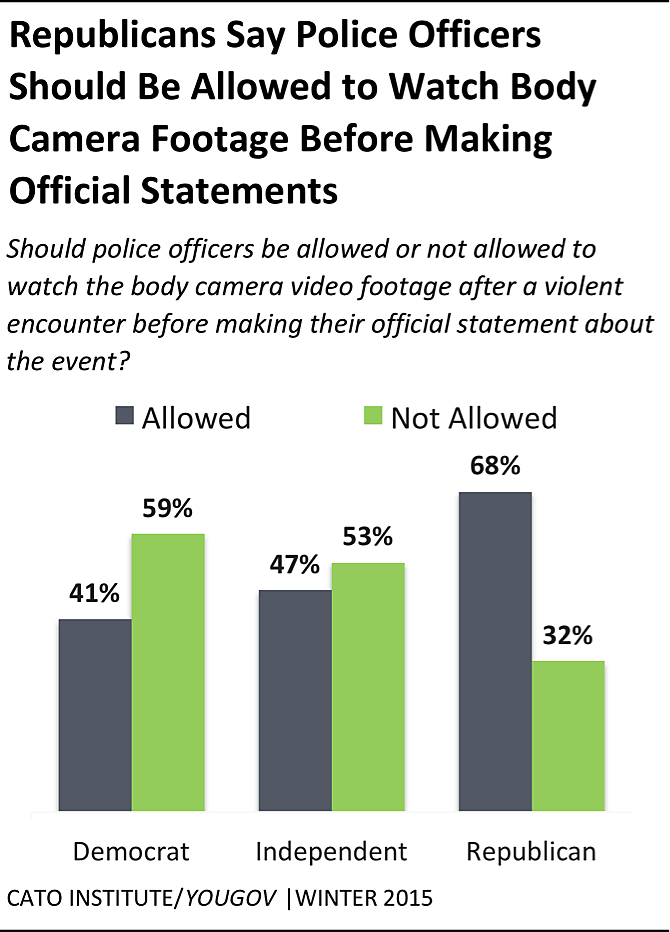 
Americans support equipping their local police departments with body cameras even if doing so requires them pay higher taxes. Furthermore, animus toward the police does not appear to drive support for police body cameras. Police favorability does not correlate with support for the program, raising taxes to pay for cameras, or whether one believes cameras better protect citizens or police officers.


One explanation for broad public support is that different groups favor body cameras and raising revenues to pay for them for different reasons. Those who trust the police may view cameras as a safeguard protecting police officers from frivolous lawsuits or may encourage citizens to behave better when interacting with cops. Furthermore, this disproportionately conservative group also tends to view policing as part of the proper role for government and thus may be more willing to raise taxes for this purpose. On the other side, those distrustful of the police may view cameras as a way to encourage officers to behave better and will make it easier to hold officers accountable for misconduct.


Favorability—and by extension public trust—of the police does play a significant role when it comes to providing individual officers early access of video footage. Those with greater confidence in their local departments likely trust that officers won’t use their early access to change their stories or mislead investigators. Conversely those who lack confidence in their local police likely worry that officers who view footage before making statements will use the opportunity to absolve themselves from blame.


The Cato Institute/​YouGov national survey of 2000 adults was conducted November 19–24, 2015 using a sample drawn from YouGov’s online panel, which is designed to be representative of the US population. The margin of sampling error for all respondents is +/-3.27 percentage points. Topline (.pdf) results can be found here, full methodological details can be found here.