Body Camera Policies Leave a Lot to Be Desired

Police body cameras can only be as good as the policies which govern them allow. Regrettably, despite widespread calls for more police officers to wear body cameras in order to improve accountability and transparency, many police departments across the United States are governed by poor policies and practices.

The Leadership Conference on Civil and Human Rights and Upturn recently released a body camera scorecard, which grades body camera policies in 25 cities, including the 15 largest departments which currently or will soon outfit officers with body cameras.

Each department was judged on a range of issues including public access to body camera policies, restrictions on biometric technology, allowing officers to view body camera footage before making a statement, and officer discretion. The results (shown below) are not encouraging. 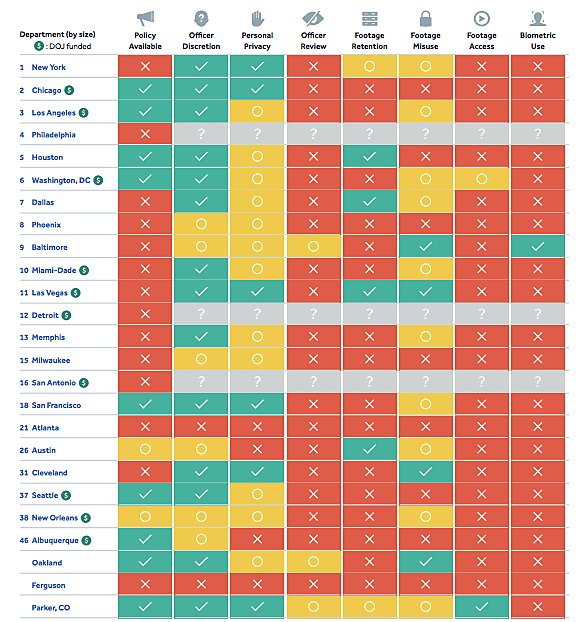 Some of the departments with disappointing policies have received funding from the Department of Justice (DOJ). The Los Angeles Police Department, for example, was awarded $1 million for body cameras despite requiring officers involved in a fatal use‐​of‐​force incident to view body camera footage before making a statement.

Body cameras are a relatively new technology with great potential, but this potential could go unrealized if lawmakers are not careful. Amid ongoing discussions on criminal justice and police misconduct, it is not surprising that body cameras are often cited as tools which can play a role in reforms. However, as the Leadership Conference on Civil and Human Rights and Upturn scorecard demonstrates, many body camera policies do not help provide the much‐​needed increase in law enforcement transparency and accountability.

In my latest Cato Institute policy analysis, I propose a number of policies which would, if implemented, provide increased transparency and accountability in law enforcement. It is understandable that law enforcement agencies and lawmakers across the country are keen to deploy body cameras. But body camera policy shouldn’t be rushed. Without the right policies in place, body cameras could come to be seen not as a valuable part of criminal justice reform, but rather a secretive and confusing law enforcement tool with worrying privacy implications.