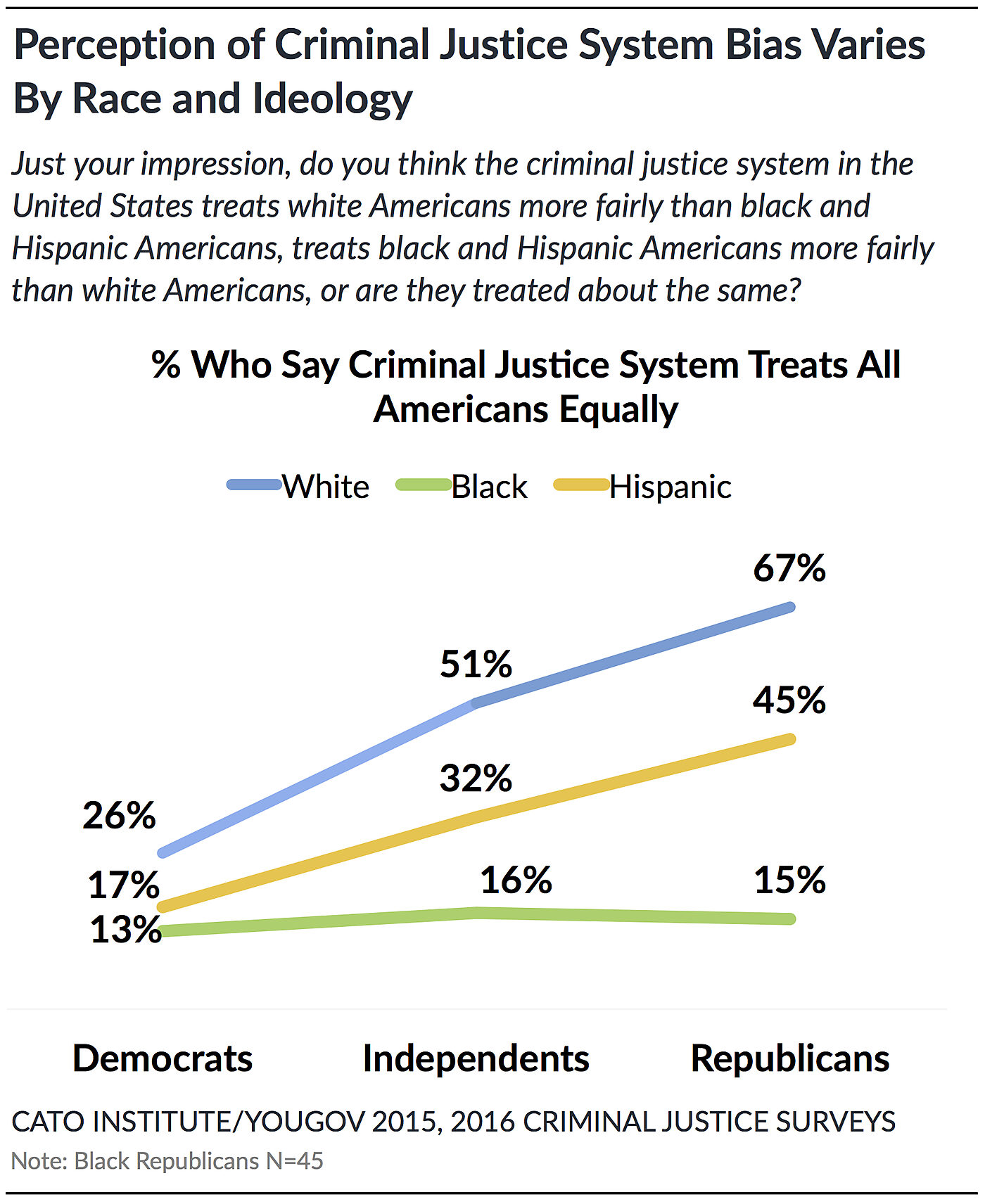 
I was able to combine two surveys conducted by the Cato Institute that included the same question on impartiality in the justice system to obtain a much larger sample size.[1] This offers an opportunity to take a look at how Republicans who are black, white, and Hispanic think about the justice system. Why do this? Essentially this “controls for” or accounts for the effect of political values when looking at how different racial/​ethnic groups evaluate bias in the justice system.


In contrast, Democrats are far more similar: 26% of white Democrats, 17% of Hispanic Democrats, and 13% of black Democrats believe the justice system treats all people equally.


Why do Republicans who are black, white, and Hispanic have such different views of racial bias in the justice system? There could be several reasons, but the most obvious one to consider is that African Americans may be having different personal or vicarious experiences with the system.


Critics who argue perceptions of racial bias in the justice system are false contend that such perceptions are merely the result of “radical” “anti‐​cop ideology” or “elites’ investment in black victimology.” But these reasons tend to be associated with the political Left, not the political Right. How many Republicans (black, white or Hispanic) could be identified as “radical” who embrace “victimology”? A better explanation might be that people feel the system is biased based on their experiences rather than simply because they are inclined to rebel against authority figures.


div[1] Question wording: “Just your impression, do you think the criminal justice system in the United States treats white Americans more fairly than black and Hispanic Americans, treats black and Hispanic Americans more fairly than white Americans, or are they treated about the same?” Data about perceptions of systemic bias by race/​ethnicity and partisanship come from the combined June 2016 and November 2015 national surveys (N=4000), which offer greater precision and smaller margins of error for subgroups. (Unweighted: Black Republicans=45, Hispanic Republicans=165, White Republicans=1193, Black Democrats=630, Hispanic Democrats=409, White Democrats=634.) Results have been weighted to be representative of the national population.