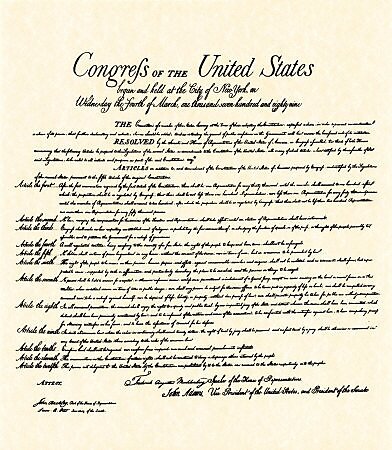 Since today is Bill of Rights Day, it seems like an appropriate time to pause and consider the condition of the safeguards set forth in our fundamental legal charter.


Let’s consider each amendment in turn.


The First Amendment says that Congress “shall make no law … abridging the freedom of speech.” Government officials, however, insist that they can make it a crime to mention the name of a political candidate in an ad in the weeks preceding an election.


The Third Amendment says soldiers may not be quartered in our homes without the consent of the owners. This safeguard is doing so well that we can pause here for a laugh.


The Fourth Amendment says the people have the right to be secure in their persons, houses, papers, and effects, against unreasonable searches and seizures. Government officials, however, insist that they can storm into homes in the middle of the night after giving residents a few seconds to answer their “knock” on the door.


The Fifth Amendment says that private property shall not be taken “for a public use without just compensation.” Government officials, however, insist that they can take away our property and give it to others who covet it.

The Sixth Amendment says that in criminal prosecutions, the person accused shall enjoy a speedy trial, a public trial, and an impartial jury trial. Government officials, however, insist that they can punish people who want to have a trial. That is why 95% of the criminal cases never go to trial. The handful of cases that do go to trial are the ones you see on television — Michael Jackson and Scott Peterson, etc.


The Seventh Amendment says that jury trials are guaranteed even in petty civil cases where the controversy exceeds “twenty dollars.” Government officials, however, insist that they can impose draconian fines against people without jury trials. (See “Seventh Amendment Right to Jury Trial in Nonarticle III Proceedings: A Study in Dysfunctional Constitutional Theory,” 4 William and Mary Bill of Rights Journal 407 (1995)).


The Eighth Amendment prohibits cruel and unusual punishments. Government officials, however, insist that jailing people who try in ingest a life‐​saving drug is not cruel.


The Ninth Amendment says that the enumeration in the Constitution of certain rights should not be construed to deny or disparage others “retained by the people.” Government officials, however, insist that they will decide for themselves what rights, if any, will be retained by the people.


It’s a depressing snapshot, to be sure, but I submit that the Framers of the Constitution would not have been surprised by the relentless attempts by government to expand its sphere of control. The Framers themselves would often refer to written constitutions as mere “parchment barriers” or what we would describe as “paper tigers.” They nevertheless concluded that putting safeguards down on paper was better than having nothing at all. And lest we forget, that’s what millions of people around the world have — nothing at all.


Another important point to remember is that while we ought to be alarmed by the various ways in which the government is attempting to go under, over, and around our Bill of Rights, the battle will never be “won.” The price of liberty is eternal vigilance. To remind our fellow citizens of their responsibility in that regard, the Cato Institute has distributed more than three million copies of our “Pocket Constitution.” At this time of year, it’ll make a good stocking stuffer. Each year we send a bunch of complimentary copies to the White House, Congress, and the Supreme Court so you won’t have to.


Finally, to keep perspective, we should also take note of the many positive developments we’ve experienced in America over the years. And for some positive overall trends, go here.