After months of not releasing official data on the number of drug‐​related killings, the Mexican government announced yesterday that in the first nine months of 2011, 12,903 people died in episodes of drug violence. The Mexican authorities, struggling to find a silver lining, noted positively that the figure reveals “a significant decrease” in the growth of the murder rate from previous years.


This tactic is similar to Washington’s creative accounting when it comes to spending “cuts:” spending continues to increase, but at a smaller percentage than previously planned. Thus, spending has been “cut.” Similarly, the number of people killed in Mexico’s drug war continued to rise in 2011, but at a lower pace than 2010. Thus, the murder rate has declined. Moreover, the 11 percent increase in murders in 2011 follows a record setting number in 2010. 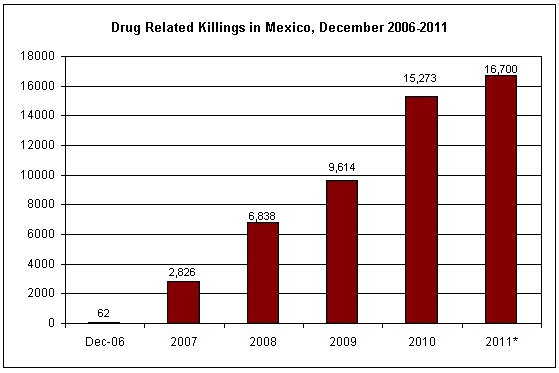 
According to an estimate from the BBC, the total number of drug deaths in 2011 is approximately 16,700. That means over 51,000 people have been killed in Mexico since president Felipe Calderón launched a war on drug cartels in December 2006. And the number may be higher.


As Mexico’s former foreign minister Jorge Castañeda said last November at the Cato conference “Ending the Global War on Drugs,” the number killed in Mexico’s war on drugs will soon equal the number of U.S. deaths in Vietnam. And let’s remember that Mexico’s population is a third of the United States’ and the Vietnam conflict lasted twice as long as Calderón’s drug offensive.


The main worry for 2012 is not that drug killings stabilize at a high rate—although that would be terrible—but that violence engulfs other areas of the country that have remained relatively peaceful, such as Mexico City. If that happens, Mexican authorities will find it even more difficult to identify “victories” in their war against cartels.