Everybody’s finding errors in Duke historian Nancy MacLean’s “work of speculative historical fiction” on Nobel laureate James Buchanan and the libertarian movement, Democracy in Chains. I’d feel left out if I weren’t misquoted, so I’m relieved to find my name on page 211. Here’s what MacLean says about me and some of my purported allies: 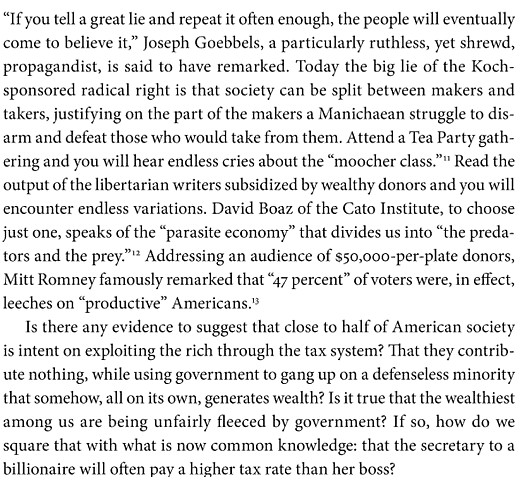 Now: Did I actually say that the poor and working class are “intent on exploiting the rich”? Or “that they contribute nothing”? Well, here’s what I wrote on pp. 252–53 of The Libertarian Mind, which is the source MacLean footnotes:

Economists call this process rent‐​seeking, or transfer‐​seeking. It’s another illustration of Oppenheimer’s distinction between the economic and the political means. Some individuals and businesses produce wealth. They grow food or build things people want to buy or perform useful services. Others find it easier to go to Washington, a state capital, or a city hall and get a subsidy, tariff, quota, or restriction on their competitors. That’s the political means to wealth, and, sadly, it’s been growing faster than the economic means.


Of course, in the modern world of trillion‐​dollar governments handing out favors like Santa Claus, it becomes harder to distinguish between the producers and the transfer‐​seekers, the predators and the prey. The state tries to confuse us, like the three‐​card monte dealer, by taking our money as quietly as possible and then handing some of it back to us with great ceremony. We all end up railing against taxes but then demanding our Medicare, our subsidized mass transit, our farm programs, our free national parks, and on and on and on. Frederic Bastiat explained it in the nineteenth century: “The State is that great fiction by which everyone tries to live at the expense of everyone else.” In the aggregate, we all lose, but it’s hard to know who is a net loser and who is a net winner in the immediate circumstance.

On the preceding pages I introduced James Buchanan and the concept of public choice:

One of the key concepts of Public Choice is concentrated benefits and diffuse costs. That means that the benefits of any government program are concentrated on a few people, while the costs are diffused among many people. Take ADM’s ethanol subsidy, for instance. If ADM makes $200 million a year from it, it costs each American about a dollar. Did you know about it? Probably not. Now that you do, are you going to write your congressman and complain? Probably not. Are you going to fly to Washington, take your senator out to dinner, give him a thousand‐​dollar contribution, and ask him not to vote for the ethanol subsidy? Of course not. But you can bet that ADM’s corporate officers are doing all that and more. Think about it: How much would you spend to get a $200 million subsidy from the federal government? About $199 million if you had to, I’ll bet. So who will members of Congress listen to? The average Americans who don’t know that they’re paying a dollar each for ADM’s profits? Or ADM, which is making a list and checking it twice to see who’s voting for their subsidy?

I also wrote on page 253 about the “parasite economy,” in which

every group in society comes up with a way for the government to help it or penalize its competitors: businesses seek tariffs, unions call for minimum‐​wage laws (which make high‐​priced skilled workers more economical than cheaper, low‐​skilled workers), postal workers get Congress to outlaw private competition, businesses seek subtle twists in regulations that hurt their competitors more than themselves.

Let’s be clear: when public choice economists and I talk about “rent seeking” and “concentrated benefits,” and we point to “subsidy, tariff, quota, or restriction on their competitors,” we’re not trying to protect the rich. We’re talking about ways that businesses, unions, and other organized interest groups seek to use government to gain advantages that they couldn’t gain in the marketplace. And when we suggest limiting the power of government to hand out such favors, we are arguing in the interests of workers and consumers.


I do not believe that MacLean’s two very short quotations from The Libertarian Mind and the paragraphs in which she situates them fairly depict my argument in the book. One might even say that she reversed the meaning of “the predators and the prey.” Unfortunately, selective quotation and misrepresentation seem to be MacLean’s M.O., as Steve Horwitz, Phil Magness, Russ Roberts, David Henderson, David Bernstein, Bernstein again, Nick Gillespie, Michael Munger, and others have pointed out.


By the way, Professor MacLean derides me as a writer “subsidized by wealthy donors.” Well, yes, it’s true that the Cato Institute is supported by voluntary contributions, not by tax funding. And donors to organizations — Duke University, NPR, the Sierra Club, Planned Parenthood, the Brookings Institution, the Cato Institute — tend to be well‐​off. But I assure Professor MacLean that I was absorbing the ideas of John Locke, Adam Smith, F. A. Hayek, the American Founders, and John Stuart Mill long before I discovered that there might be jobs available to write about such ideas.


Although James Buchanan was not involved in the founding of the Cato Institute, as MacLean writes, we are proud that he chose to write frequently for the Cato Journal, speak at various Cato events, and allow us to count him as a Distinguished Senior Fellow. And we regret that he has been so ill treated by a fellow academic.