America Is One of the Least “Generous” Countries on Immigration

During his State of the Union speech, President Trump will tout his plan for draconian restrictions on legal immigrants. Supporters, like House Judiciary Committee Chairman Bob Goodlatte (R-VA), justify the plan by claiming that America is “by far the most generous nation in the world for legal immigration.” Not only is "by far" clearly false, but when you consider its wealth, America is already among the least generous to immigrants around the world.

The United Nations data contains information on the foreign-born populations in all countries (or semi-independent provinces) around the world.* U.S. immigration is decidedly unimpressive compared to all countries. Although America does have the highest total number of foreign-born residents in the world, a fair comparison requires controlling for the size of its current population. After all, a million new people entering India with a population of 1.3 billion would have very different effects than a million new people entering Estonia with a population of 1.3 million.

With this in mind, it is clear that America is nowhere near “the most generous country in the world” on immigration. Of the 232 jurisdictions that the UN includes, America ranks just 64th overall. Focusing on the rate of new immigrants as a share of total population, the United States had only the 49th highest net immigration rate from 2015 to 2017 (inflows minus outflows of foreign residents divided by total population). This places the United States rank in the 72nd and 79th percentiles in the world, respectively. 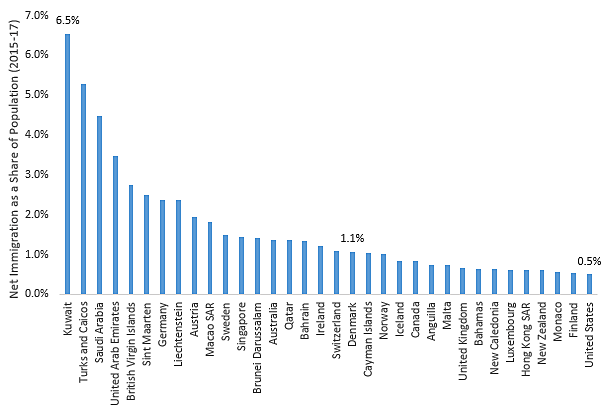 By almost any reasonable standard, America is already one of the least generous countries in the world toward legal immigrants. If the United States does implement the White House’s immigration framework, it would be moving its nation’s immigration system in the opposite direction of the rest of the world. Other developed economies are opening their borders to more immigrants than ever, while the United States would have sent its immigration rate back to its lowest level since World War II.

America, however, doesn’t need to be “generous” toward immigrants at all. It is in the country’s self-interest not to prohibit foreigners from living and working in America. Allowing people to freely move and work where they want is not charity. It is an expansion of the free market and allows people to contribute to the economic prosperity of the country and expand the pie for everyone. The president’s plan would make America both less generous and less prosperous.

Table 1: Immigration and Immigrant Population Ranking for Countries with Greater Than $20,000 Per Capita Gross Domestic Product

*Note: The UN defines “foreign-born” to include people who receive citizenship through their parents despite being born overseas. Typically, the United States does not consider such people “immigrants” as they are citizens at birth. This results in a higher share of foreign-born for the United States than other estimates.