In the era of Obamacare, EPA overreach, and job‐​killing minimum wage increases, the spread of educational choice policies seems like one of the few areas where conservatives and libertarians are succeeding.

However, the scale of that success is much less than it may appear.

Maine and Vermont first adopted town tuitioning programs in the late-19th century, but as you can see in the following chart, most of the growth in the number of private educational choice programs–including school vouchers, tax-credit scholarships, and education savings accounts (ESAs), but not charter schools — came in the last five years. Last year alone, seven states enacted eight new choice programs and nine states expanded 13 existing choice programs. 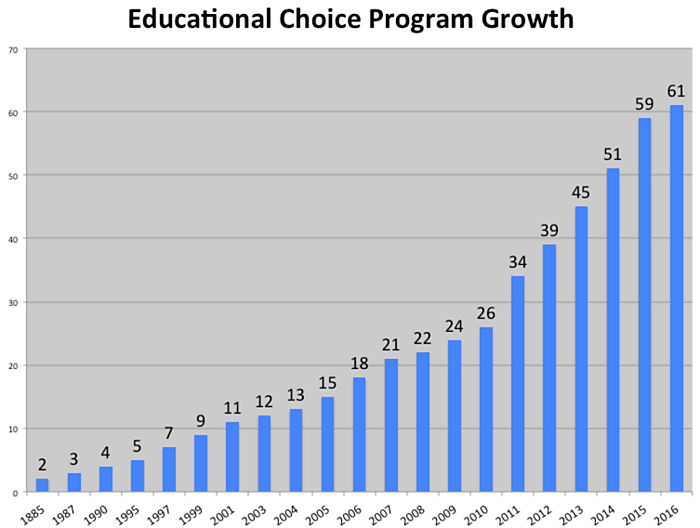 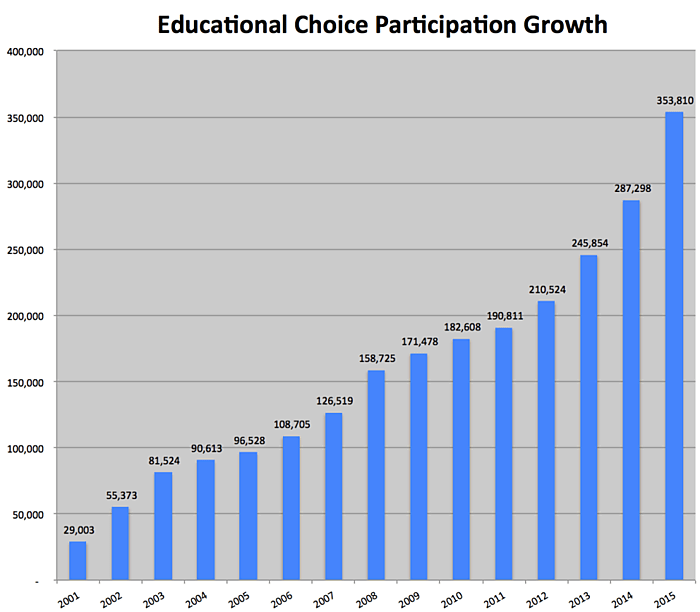 The growth is impressive, but compared to the enrollment in traditional district schools, it looks more like John Kasich’s delegate count. (Apologies to any stray Ricochetti who are feelin’ the Kasich-mentum.) In 2015, the number of US students participating in private educational choice programs was only 0.7 percent of the number enrolled in district schools. You’ll need your reading glasses to see the small blue slivers representing choice program enrollment in the chart below. 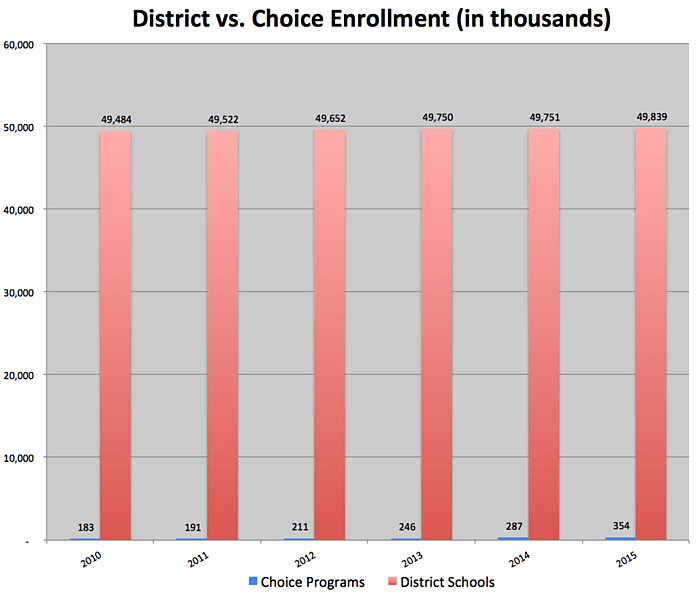 Nevertheless, opponents of school choice often decry these programs as “the camel’s nose under the tent,” to which I respond: if only! In reality, most private school choice programs are more like a camel’s whisker.

Consider some of the most recently adopted choice programs.

These programs are better than nothing, but they’re far from the transformative markets in education that Milton Friedman envisioned decades ago.

Maryland just enacted a school voucher program for low‐​income students with a budget of $5 million. That might sound like a lot, but it’s a drop in the ocean next to the more than $13 billion Maryland’s district school system spends annually. Roughly 1,000 low‐​income Maryland students could receive a voucher next year, which is great for them, but doesn’t do anything for the other 99.9 percent of Maryland’s 880,000 district school students.

Back in March, South Dakota enacted scholarship tax credit program with a total budget cap of $2 million, which could provide up to 500 students with scholarships worth $4,000. Again, it’s a good start, but what about the other 99.6 percent of South Dakota’s 131,000 district school students?

Last year, Montana also created a scholarship tax credit, but the program is hobbled by absurd restrictions. As in 16 other states, taxpayers receive tax credits for donations to nonprofit scholarship organizations. However, Montana not only caps the total number of credits at $3 million, it also caps the amount of each credit‐​eligible donation at $150, meaning that a single $5,000 scholarship will require 34 donors. No other state has such a restrictive per‐​donor credit cap. For scholarship organizations to raise enough funds to provide 600 students with $5,000 scholarships, they’ll need at least 20,000 donors.

These programs are better than nothing, but they’re far from the transformative markets in education that Milton Friedman envisioned decades ago. Of the recent educational choice laws, the closest is Nevada’s nearly universal ESA for students switching out of their district schools, but several leftist groups immediately filed multiple lawsuits against it and a judge halted implementation pending the state supreme court’s decision. However, most of the recent choice programs will merely fill empty seats at some private schools, but won’t do much to spur growth or foster the sort of innovation and competition that we see in robust markets.

Educational choice advocates should not be satisfied merely to “put states on the map.” When a smiling governor signs a bill that won’t even provide enough scholarships for all the students standing on the stage with him, we should offer one cheer, or perhaps even two, but certainly not three. We should praise him for enacting a “pilot program” that is “a good start” but we must keep our eyes on the prize: a system that provides educational choice to every student.