Will this essay — or the op‐​eds nearby — change your mind?

The traditional op‐​ed may seem quaint compared with tweetstorms, tell‐​all interviews and cable news shouting sessions. Skeptics may be forgiven for dismissing this medium as old‐​fashioned and ineffective. We have new evidence, however, that should persuade even a determined skeptic.

In a peer-reviewed study we published this month, we find op-eds do change minds. After reading opinion pieces, we found people were far more likely to agree with the author’s point of view. Even in today’s allegedly post-fact world, people are capable of considering new evidence and reaching new conclusions.

The op-ed is an experiment only 50 years old

In 1970, when the New York Times debuted the modern “opposite the Editorial Page,” or op-ed, then-editor John B. Oakes announced grand ambitions. This opinion page was to be designed to an intellectual arena, designed to provoke new ideas and discussion on public policies among regular readers and political insiders alike.

Was Oakes's optimism misplaced? Op-eds might fail to persuade for a number of reasons. People might be unwilling to consider alternative points of view. Even if they are, the arguments might be too complex for people not versed in intricate policy details. Those familiar with the topics — journalists, political pundits, policy wonks and Capitol Hill staff — may already have strongly held opinions. Or op-eds might simply preach to the choir or flatter authors' egos, putting their names in print.

Our evidence suggests not. We find not only can op-eds change the minds among general readers, but also among Washington policy professionals as well.

Here is how we did our research:

In our study, we assessed how about 3,500 Americans reacted to reading op-eds. We obtained our sample on Mechanical Turk, a service for obtaining online convenience samples that are not representative of the public at large (though see recent evidence that Mechanical Turk produces generalizable inferences in studies like ours). We randomly assigned participants to read one of five op-eds, or no op-ed at all. Afterward, they took a survey on the topics discussed in the op-eds, to measure how much readers agreed with the authors. We then compared the survey answers among those who had read the op-eds with answers from those who had not.

Strikingly, respondents became substantially more likely to agree with the author whose op-ed they read.

For example, some subjects were assigned to read “The Other Veterans Scandal” by Michael F. Cannon and Christopher A. Preble, published by the New York Times on June 15, 2014, which harshly critiqued the Department of Veterans Affairs and proposed major policy changes.

Nor was it just this particular op-ed. Each of the other op-eds we tested — originally published in either the Wall Street Journal, Newsweek, or USA Today on infrastructure, climate change, taxes, and financial professionals — were similarly effective. 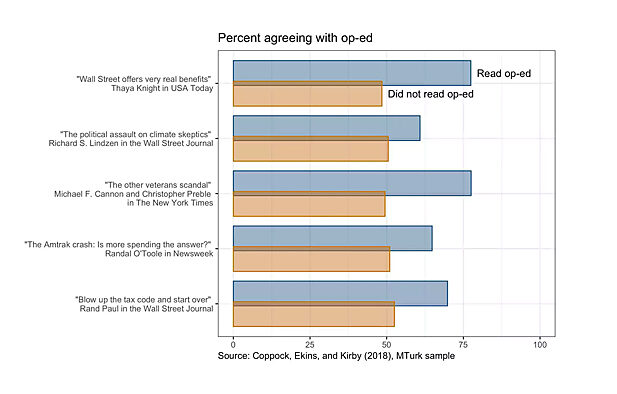 That suggests each well-written op-ed changes a lot of minds. If a successful op-ed is read by about a half-million people, we can expect it changes between 50,000 and 100,000 minds.

Whom do op-eds convince?

But are op-eds only preaching to the choir — convincing partisans already predisposed to agreeing with them? That is not what we found. While there are some small differences in results, we find  Republicans, Democrats and independents were persuaded by the op-eds.

We replicated our study among a sample of 2,000 congressional staffers, journalists and other professionals. This sample was obtained by emailing a list of 32,500 policy and political professionals and inviting them to participate. On average, the share of these “elite” readers who came to agree with the op-ed’s argument increased by 12 percentage points.

The effects of reading the op-ed were still there, a month later

Perhaps more surprising, these effects persisted. When we followed up with another survey with our participants a month later, op-ed readers were still significantly more likely than non-readers to agree with the authors whose op-ed they read. The immediate effect of the veterans op-ed was 28 percentage points, but after a month, the effect had halved to 14 points.

This pattern was consistent across all five op-eds: The effects of reading the piece were approximately 50 percent of the original size after 30 days.

Our results show even now, in a divisive period in our national politics, Americans are capable of considering diverse views, absorbing facts and even changing their minds. Contrary to a large volume of commentary from many quarters, the “other side” is not immune to evidence and argument. Persuasion is possible, even commonplace.

This is good news, both for editorial pages and for members of the public who read them.