The current debate over “secular economic stagnation” seems rife with inappropriate metrics and verbiage. Prominent analysts are using claims about “GDP gaps” and “investment shortfalls” to promote massive increases in government expenditures. However, when recommendations to reverse a long‐​term growth slowdown sound identical to those for re‐​employing idle resources during recessions, something seems amiss. A better approach would prioritize reforms of the federal tax system and resolutions of large extant financial imbalances in social insurance programs.

Concern over a forthcoming secular stagnation is prompted by the slow recovery from the 2007-09 recession and a large apparent "GDP gap" in its aftermath: Comparisons of actual GDP with GDP projected using pre-recession growth rates show that the "GDP gap," thus measured, has become especially large after the last recession (Figure 1). 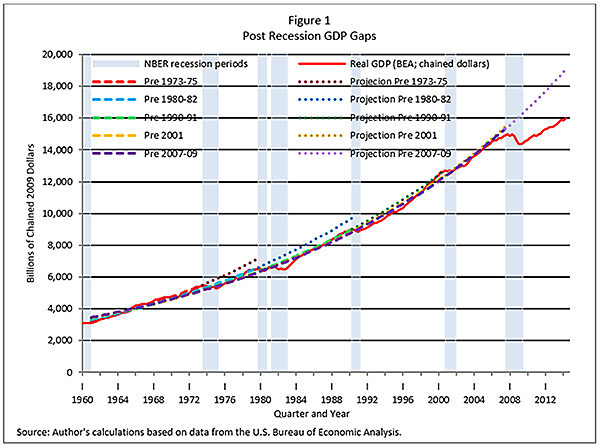 But that recession involved a financial sector collapse from an almost universally unexpected and broad decline in home prices. The ensuing mortgage defaults and foreclosures triggered financial deleveraging and portfolio imbalances for households, firms, and banks, prompting stricter lending standards. Previous credit relationships, built over a long time, have been obliterated.1 As validated by the historical record, a slow recovery was inevitable. Five years after the recession ended, however, the recovery has progressed sufficiently to cast doubt that resource underutilization remains significant.2

Judgment about future potential GDP and growth should be based primarily on prospective growth of productive factors and not pre-recession growth rates upon which GDP-gap metrics are based. Under today's social and demographic features and continued anti-work and anti-investment policies, the conjecture that future sustainable economic growth will be lower seems credible. If that is correct, promoting faster economic growth through policies to boost aggregate demand is unlikely to work.

A popular explanation of the slow recovery is in terms of the natural interest rate. High global saving — which initiated the pre-recession housing boom — is continuing but aggregate (especially investment) demand has slowed causing the natural interest rate to become negative – a condition where normal monetary policy tools are inoperative. Such a superficial macroeconomic analysis directly motivates proposals for additional debt-financed public expenditures to offset the "investment shortfall."

A more appealing alternative to the "investment shortfall" view is insufficiency of "investment capacity." Low investment demand results not necessarily from mistaken private sector decisions in a negative interest rate environment but from poor prospective economic conditions and economic policies that exacerbate those conditions. Low growth in the supply of complementary productive factors is making additional private capital investments in the United States not worthwhile.

High cash holdings by firms and households and more frequent business inversions are signals of investment incapacity in the United States — the lack of complementary productive factors, especially human capital, and prospects of tax rate increases.3 This calls for focusing on tax policy reforms to accelerate the growth of productive factors and improve, in that way, the environment for investments in both human and physical capital.

While additional public investments may be justified under particular local economic conditions, a debt-financed surge in such spending to achieve uncertain and unverifiable "national macroeconomic goals" is best avoided when structural features of the population and economy appear inconsistent with sustainable output growth as rapid as that witnessed the past.6 Under such conditions, attempts to massively stimulate the economy beyond its sustainable growth risk higher inflation or asset price bubbles — notoriously detectable only after they burst with disastrous economic effects. Moreover, investment incentive policies being recommended would circumvent financial market lending criteria, increase government-funding costs, and saddle taxpayers with additional credit risks.7

Future growth in U.S. productive factors is influenced by:

Features of the U.S. demographic and economic profile suggest continued increases in some these components — but at a slower pace than earlier — and declines in others. Some prospective growth features of productive factors are "baked in" the U.S. demographic profile and are not materially alterable through popularly acceptable policy changes. Experienced baby-boomers will be replaced by a smaller cohort of similarly aged but not necessarily similarly experienced workers. Census Bureau data show labor-force attachment of working-aged individuals trending downward with more workers employed part time rather than full time since the year 2000.8 Today's demographic momentum appears likely to carry those trends forward.8 The Affordable Care Act will likely reduce labor force attachment through higher wage taxes, reduced employer-based health insurance, larger health care subsidies, and expanded Medicaid eligibility.10

The workforce's schooling-completion rates have been increasing with payoffs to education. However, those rates differ dramatically by gender, race, and other socio-economic characteristics. Growing population diversity, the rising cost of acquiring education, and growing economic inequality appear likely to slow future education and skill advancement rates.

Family formation, which has declined for several decades, fell dramatically during the recession.11 Marital status, stability, family size, and living arrangements are correlated with labor productivity and the trends in those attributes suggest lower future productivity. For example, residence by young adults with their parents, which is associated with poorer work prospects and later job attachment, has increased.

On balance, projections suggest that these factors will impart a net drag on future labor productivity and output growth.12 Hence, policies to promote a secular expansion of the economy's productive factors should be prioritized over broad and potentially haphazard expansions of public investment expenditures.

These productivity-reducing demographic and economic trends could be countered through a fairer, flatter, and more efficient tax system. Broadening the tax base by eliminating loopholes and reducing tax preferences — such as health care, mortgage interest, state and property taxes, and various household and business tax credits — would permit tax rate reductions to generate stronger incentives for education, work, saving, and entrepreneurship. Moreover, reducing the 35 percent corporate tax rate — among the highest in the world — would increase the international competitiveness of American businesses.

Perhaps the most significant threat to American economic dynamism is the federal government's large and growing unfunded obligations. Calculations indicate that the total U.S. federal "fiscal imbalance," assuming continuation of today's fiscal policies, amounts to $83 trillion in today's dollars or 8.4 percent of the present value of future GDP (PVGDP).13 Out of this prospective federal financial shortfall, the share arising from the two largest entitlement programs — Social Security and Medicare — is $67 trillion or 6.8 percent of PVGDP. Finally, the share of the fiscal imbalance contributed by past and living generations under those two social insurance programs amounts to $54 trillion or 5.5 percent of PVGDP.14 These figures show, not the projected amount of a future debt build-up, but the structural financial imbalance embedded in current fiscal policies, which must be resolved by changing those policies.

The fiscal imbalance as a share of the present value of future payrolls amounts to nearly 19 percent. It implies that payroll taxes would have to be more than doubled — or federal expenditures reduced equivalently — to eliminate that imbalance. The large current-policy imbalance implies high uncertainty about future fiscal policy, which likely erodes incentives to acquire education and skills, work, save, invest, and start businesses. Those incentives will likely worsen while reforms to establish credible and dependable tax and expenditure policies are postponed. Social insurance reforms to recognize program debt to retirees, slow benefit increases, index retirement ages to human longevity, and introduce pre-funded saving programs to bolster retirement security, would prevent the federal budget imbalance from escalating.

Today's federal fiscal overextension arose primarily from past expansions of pay-as-you-go-financed entitlements for retirees and others who spend at a faster rate out of their resources. This was the channel for past aggregate-demand boosts accomplished through the public purse. Having exhausted the scope for similar increases in entitlement benefits — because social insurance programs are approaching insolvency — some analysts are seeking to boost public expenditures by conjuring the specter of "secular stagnation" under questionable metrics, superficial analyses, and misleading rhetoric about "investment shortfalls."

As argued herein, prospective slower growth in productive factors merits prioritizing the removal of constraints on "sustainable growth," which requires prioritizing fiscal policy reforms. Key among such reforms are (1) a comprehensive tax reform to broaden the tax base, eliminate tax loopholes and preferences, and make U.S. taxes more internationally competitive and (2) a resolution of the financial imbalance in social insurance and other federal programs to restore dependability to future U.S. fiscal policy.