So how did Zimbabwe go from economic ruin to an annual GDP growth rate of 9.32 percent in 2011, with estimates of relatively strong growth rates through 2013?  As I predicted in early 2008, the answer is simple: spontaneous dollarization brought an end to the horrors of hyperinflation.

In late 2008, the people of Zimbabwe spontaneously dollarized the economy. Thiers’ Law prevailed: good money drove out bad, and the government’s hands were tied. Indeed, the government was forced to officially dollarize in 2009. Since then, Zimbabwe has enjoyed positive GDP growth rates, a feat not accomplished since 2001 (see accompanying chart). 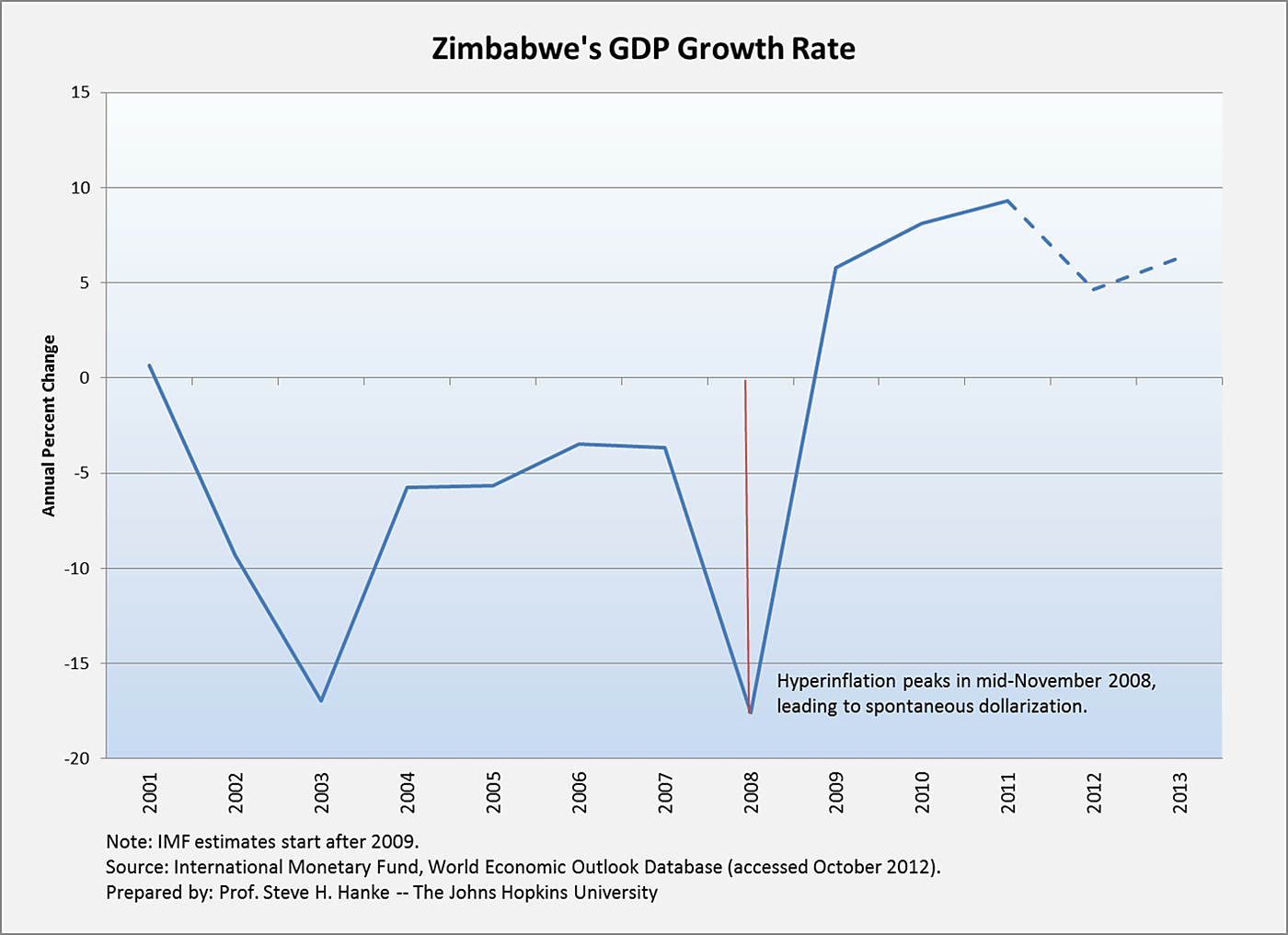 While these achievements are cause for celebration, there are still problems in paradise: Robert Mugabe continues to hold the reins of power; Zimbabwe’s “Ease of Doing Business” ranking is a dismal 172nd out of 185; and “change” is, in short, hard to come by. In addition, the government’s external debt is now close to $12.5 billion and lending rates between Zimbabwe’s embattled banks are as high as 25 percent. To top it off, the Zimbabwean government is attempting to force banks to buy its treasury bills at significantly discounted rates, after its debt auction flopped in early October. Talk about ruling with an iron fist.

If this isn’t bad enough, Zimbabwe’s official statistics have produced a very low signal-to-noise ratio---one that, quite frankly, leaves one listening to static. Both the quantity and quality of official data, ranging from migration statistics to trade figures, are in short supply, particularly data from the period of Zimbabwe’s 2007-08 hyperinflation.

None of this comes to a surprise to me. After all, as far as Zimbabwean officials are concerned, the country’s hyperinflation peaked in July 2008, with a monthly inflation rate of 2,600 percent. After this point, Zimbabwe stopped collecting and reporting data on price changes, throwing a shroud of secrecy over the country's hyperinflation disaster. In reality, hyperinflation continued after July 2008, growing at an exponential rate until mid-November 2008.

Alex Kwok and I lifted the shroud on this hyperinflation in our 2009 Cato Journal article. We determined that Zimbabwe’s hyperinflation actually peaked in mid-November 2008, with a monthly rate over 30 million times higher than the final inflation rate reported by the government. In an attempt to correct the government’s lying statistics, I have contacted high officials in Zimbabwe via telephone and email. But, I have been stonewalled, given a bureaucratic runaround.

The last thing the Mugabe government seems to be interested in is an accurate account of the world’s second-highest hyperinflation. Lying statistics remain the order of the day.