As I wrote on 25 June 2008, "Zimbabwe is in the late stages of a classic hyperinflation. … Inflation is galloping ahead as the supply of Zimbabwe dollars surges and the demand for them shrinks. Eventually, the currency will totally collapse as people simply refuse to accept it." In recent months, facts on the ground have validated this prognostication. The Zimbabwe dollar is dead.

Zimbabwe failed to break Hungary's 1946 world record for hyperinflation. That said, Zimbabwe did race past Yugoslavia in October 2008. In consequence, Zimbabwe can now lay claim to second place in the world hyperinflation record books.

Zimbabwe is the first country in the 21st century to hyperinflate. In February 2007, Zimbabwe’s inflation rate topped 50% per month, the minimum rate required to qualify as a hyperinflation (50% per month is equal to a 12,875% per year). Since then, inflation has soared.

The last official inflation data were released for July and are hopelessly outdated. The Reserve Bank of Zimbabwe has been even less forthcoming with money supply data: the most recent money supply figures are ancient history—January 2008.

Absent current official money supply and inflation data, it is difficult to quantify the depth and breadth of the still-growing crisis in Zimbabwe. To overcome this problem, Cato Senior Fellow Steve Hanke has developed the Hanke Hyperinflation Index for Zimbabwe (HHIZ). This new metric is derived from market-based price data and is presented in the accompanying table for the January 2007 to present period. As of 14 November 2008, Zimbabwe’s annual inflation rate was 89.7 Sextillion (1021) percent.

Since mid-November 2008, the weekly update of the HHIZ has been put on hold. The market-based price data from Zimbabwe have deteriorated and, at present, cannot be used to update the HHIZ. HHIZ updates will be resumed as soon as the quality of the data reaches a satisfactory level.

*Steve H. Hanke is one of the world’s leading experts on exchange-rate regimes. He has played a prominent role in designing and implementing monetary reforms that have stopped very high or hyperinflations in eight countries. 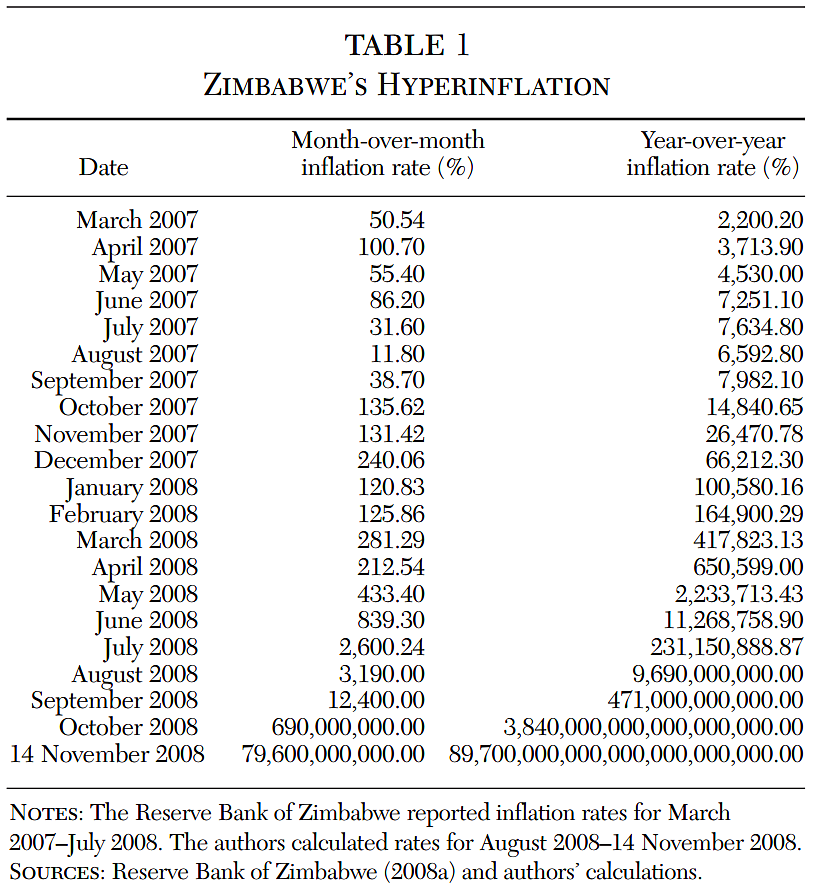 Notes:
1. Numbers are reported with three significant figures.
2. The HHIZ is reported on the last trading day of the week.
3. The monthly inflation rate is HHIZ(t)/HHIZ(t-4) - 1 and the annual inflation rate is HHIZ(t)/HHIZ(t-52) - 1.
4. The HHIZ values are numerical estimates. In consequence, they are subject to revision when new price data are incorporated into the estimates.
5. Prof. Hanke would like to thank Alex Kwok for his research assistance on this project.
6. Prof. Hanke can be reached at his Johns Hopkins University office: (410) 516-7183 or hanke@jhu.edu

"A Decade of Suffering in Zimbabwe: Economic Collapse and Political Repression under Robert Mugabe," by David Coltart, Development Policy Analysis no. 5, March 24, 2008.

"Fixing One of the World's Most Broken Education Systems," by Marian L. Tupy, The Atlantic, June 5, 2012.