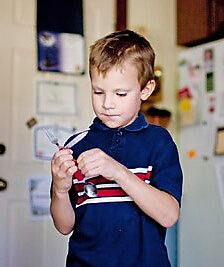 When both the New York Times and Fox News poke fun at a school district it’s a good guess that district has done something pretty silly. That seems to be the case in Newark, Delaware, where the Christina School District just suspended a 6‐​year‐​old boy for 45 days because he brought a dreaded knife‐​fork‐​spoon combo tool to school. District officials, in their defense, say they had no choice — the state’s “zero tolerance” law demanded the punishment.


Now, the first thing I’ll say is that I was very fortunate there were no zero‐​tolerance laws — at least that I knew of — when I was a kid. Like most boys, I took a pocket knife to school from time to time, and like most boys I never hurt a soul with it. (I’m pretty sure, though, that I was stabbed by a pencil at least once.) I also played a lot of games involving tackling, delivered and received countless “dead arm” punches in the shoulder, and brought in Star Wars figures armed with…brace yourself!…laser guns! I can only imagine how many suspension days I’d have received had current disciplinary regimes been in place back then.


Before completely trashing little ol’ Delaware and all the other places without tolerance, however, there is a flip side to this story: Some kids really are immediate threats to their teachers and fellow students. And as the recent stomach‐​wrenching violence in Chicago has vividly illustrated, there are some schools where no one is safe. In other words, there are cases and situations where zero tolerance is warranted.


So how do you balance these things? How do you have zero‐​tolerance for those who need it, while letting discretion and reason reign for everyone else? And how do you do that when there is no clear line dividing what is too dangerous to tolerate and what is not?


The answer is educational freedom, as it is with all of the things that diverse people are forced to fight over because they all have to support a single system of government schools! Let parents who are not especially concerned about danger, or who value freedom even if it engenders a little more risk, choose schools with discipline policies that give them what they want. Likewise, let parents who want their kids in a zero‐​tolerance institution do the same.


Ultimately, let parents and schools make their own decisions, and no child will be subjected to disciplinary codes with which his parents disagree; strictness will be much better correlated with the needs of individual children; and perhaps most importantly, discipline policies will make a lot more sense for everyone involved.