You Want It All, But You Can’t Have It

It certainly seems like there are an awful lot of folks on the American political scene willing to pay at least lip service to smaller government, so you’d think at least we might see a trend over time of wax alternating with wane, following “the zig‐​zag of politics,” as Robert Nozick called it. Instead, it seems to just keep on growing. (Though as David Boaz recently noted, that’s not the same as saying we’ve gotten steadily less free on net over the centuries.) Various cogent explanations for this have been floated, but John Sides and Annie Lowery both point out that there’s an enormous contributing factor that fits neatly into a single pair of graphs: 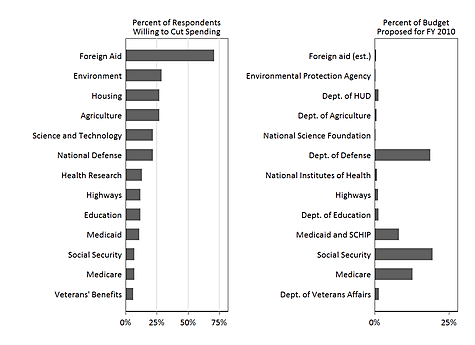 In short, the things people are willing to consider cutting to balance the budget already make up an infinitesimal portion of the whole. Of the real bank-breakers—Medicaid, Medicare, Social Security, and Defense—only Defense finds even a fifth of respondents prepared to countenance cuts. The only area where a majority support cuts is foreign aid—about 1 percent of the budget. And as The Economist notes, the same problem probably recurs even within the foreign aid category. Are people ready to cut aid to Israel, Iraq, or Afghanistan? Because those three represent 39 percent of our foreign aid outlays.


You can, I suppose, see this as confirmation that the democratic process works—for some values of “works”: At least we’re spending ourselves into penury for programs people are fairly attached to. But it also means there’s not much low‐​hanging fruit worth plucking. It’s fun to take potshots at the earmarks for research on manatee appreciation of dubstep, but any serious effort to control the budget requires tackling programs that are actually popular. One approach to this, of course, is to try and make the popular programs less popular—or at least to convince people that their growth can be constrained without some sort of catastrophe ensuing. Another is to try to insulate political actors against backlash, and attempt to bundle cuts so that the public can be presented with a binary up‐​or‐​down choice about a deficit reduction package. That doesn’t make the individual cuts any more popular, of course, but it at least makes it harder to dodge reality by pretending one just opposes cutting this vital program, while remaining strongly committed to fiscal responsibility by other, unspecified means.


Hence the appeal of expert commissions, or the suggestion in a recent David Brooks column that we take “a dozen handpicked senators and House members and stick them in a room three times a week for six months.” Stuff like this is easy to mock—and it invariably is mocked—as a water‐​headed attempt to wish away deep substantive disagreements and intransigent conflicting interests. But I think at least part of the appeal of such schemes comes from the perception that polarized popular political rhetoric actually masks substantial agreement among policy experts across the spectrum. I’m no entitlements wonk, of course, but my sense is that just about everyone who seriously studies the situation agrees that the growth trajectory of these programs is unsustainable, and that some mix of benefit reductions and tax increases will be required to address the problem. The exact proportions are obviously contested, but surely it would be a vast improvement if pundits and elected officials would admit even this much—that there is no serious question of “whether” but only “how much of each.” It would scarcely end debate, but it might be a precondition for productive debate.


The glimmer of hope in that graph is that—perhaps because most deficit hawks tend to be hawk‐​hawks as well—we don’t see a whole lot of arguments for the one path to greater fiscal responsibility that’s both realistic and palatable to at least a substantial minority: Cutting military spending. I’m proud to note that my Cato colleagues are an exception here. Could this be one of the few proverbial $5‐​bills‐​on‐​the‐​sidewalk in American politics?