You Ought to Have a Look: Web Reactions to SOTU Climate Claims

In this week’s installment of You Ought to Have a Look, we take a look at the “climate” section of President Obama’s State of the Union address and highlight some reactions to it from around the web.

A bit of our own reaction is captured in this excellent video of Cato scholars’ responses to the SOTU. As a group, we ranged from being underwhelmed to being horrified.

Here is what the President had to say about the issue of climate change and what he is “doing about it”:

2014 was the planet's warmest year on record. Now, one year doesn't make a trend, but this does—14 of the 15 warmest years on record have all fallen in the first 15 years of this century.

I've heard some folks try to dodge the evidence by saying they're not scientists; that we don't have enough information to act. Well, I'm not a scientist, either. But you know what—I know a lot of really good scientists at NASA, and NOAA, and at our major universities. The best scientists in the world are all telling us that our activities are changing the climate, and if we do not act forcefully, we'll continue to see rising oceans, longer, hotter heat waves, dangerous droughts and floods, and massive disruptions that can trigger greater migration, conflict, and hunger around the globe. The Pentagon says that climate change poses immediate risks to our national security. We should act like it.

That's why, over the past six years, we've done more than ever before to combat climate change, from the way we produce energy, to the way we use it. That's why we've set aside more public lands and waters than any administration in history. And that's why I will not let this Congress endanger the health of our children by turning back the clock on our efforts. I am determined to make sure American leadership drives international action. In Beijing, we made an historic announcement—the United States will double the pace at which we cut carbon pollution, and China committed, for the first time, to limiting their emissions. And because the world's two largest economies came together, other nations are now stepping up, and offering hope that, this year, the world will finally reach an agreement to protect the one planet we've got. 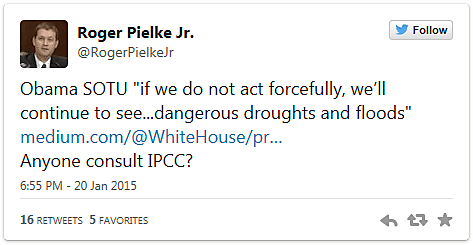 Over at American Energy Alliance (AEA), whose mission statement reads, in part, “to enlist and empower energy consumers to encourage policymakers to support free market policies,” their take was laid out in a blog piece titled “Obama’s SOTU: the Good, the Bad, and the Forgotten,” and summed up as:

In his 2015 State of the Union address, President Obama referenced booming domestic energy production and low gas prices. Unfortunately, the U.S. has more abundant and affordable energy despite the president’s policies, not because of them. While America’s energy innovators are producing record amounts of oil and natural gas on state and private lands, output on federal lands has been dropping for years. Meanwhile, the president’s costly climate agenda would make energy more expensive for all Americans, particularly minorities and low-income households. A positive vision for energy prosperity lies with America’s energy producers and American families, not with President Obama’s policies.

Be sure to stop by to see what AEA found in the president’s address that was good, bad, and what he left out.

But perhaps, when it comes to climate science, Judy Curry, in her blog post “Raw Politics of Climate Change in the U.S.,”  said it best. Curry seemed to be taking a page right out of our playbook (see highlighted section, our emphasis):

So what is wrong with President Obama’s statements as cited above?

…The apparent ‘contract’ between Obama and his administrators to play politics with climate science seems to be a recipe for anti science and premature policies with negative economic consequences that have little to no impact on the climate.

Maybe some day, in a future administration, we can have a grown-up conversation about climate change (natural and human caused), the potential risks, and a broad range of policy responses.