You Ought to Have a Look: A Shout‐​Out to Lukewarming, a Look at the Republic of Science and a “Roundup” of EPA and Glyphosate

We’ve put together an interesting collection of articles this week for your consideration.

First up is a shout out to lukewarming from Bloomberg View columnist Megan McArdle. In her piece “Global Warming Alarmists, You’re Doing It Wrong,” McArdle suggests that lukewarmers have a lot to bring to the climate change table, but are turned away by the entrenched establishment and tarred with labels like climate “denier”—a label which couldn’t be further from the truth. McArdle writes:

Naturally, proponents of climate-change models have welcomed the lukewarmists' constructive input by carefully considering their points and by advancing counterarguments firmly couched in the scientific method.

No, of course I’m just kidding. The reaction to these mild assertions is often to brand the lukewarmists “deniers” and treat them as if what they were saying was morally and logically equivalent to suggesting that the Holocaust never happened.

There is a huge range of possible beliefs that go into assessing the various complicated theories about how the climate works, and the global-warming predictions generated by those theories range from “could well be catastrophic” to “probably not a big deal.” I know very smart, well-informed, decent people who fall at either end of the spectrum, and others who are somewhere in between. Then there are folks like me who aren’t sure enough to make a prediction, but are very sure we wouldn’t like to find out, too late, that the answer is “oops, catastrophic.”

These are not differences that can be resolved by name calling. Nor has the presumed object of this name calling -- to delegitimize thoughtful opposition, and thereby increase the consensus in favor of desired policy proposals -- been a notable political success, at least in the U.S. It has certainly rallied the tribe, and produced a lot of patronizing talk about science by people who aren’t actually all that familiar with the underlying scientific questions. Other than that, we remain pretty much where we were 25 years ago: holding summits, followed by the dismayed realization that we haven’t, you know, really done all that much except burn a lot of hydrocarbons flying people to summits. Maybe last year's Paris talks will turn out to be the actual moment when things started to change -- but having spent the last 15 years as a reporter listening to people tell me that no, really, we’re about to turn the corner, I retain a bit of skepticism.

How was this bit of advice from McArdle received by some of the loudest name-callers? Not well, as she describes in this follow-up: 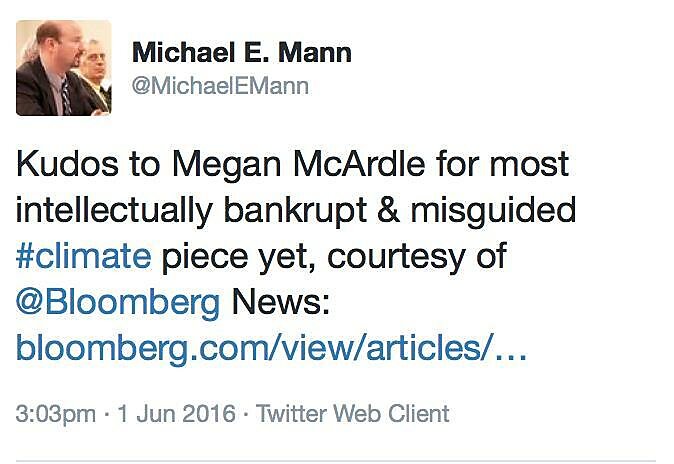 Then he blocked me. You will correctly infer that I was also inundated with other interlocutors on social media and e-mail. Many of them were respectful. Others were … less so. At worst, they suggested, I was a paid shill for fossil fuel interests. (Not so. I accept no pay from anyone other than Bloomberg.) At best, they said, I was a fool who was giving aid and comfort to the enemy. My editor was thusly chided for the column: “shame on you for publishing it, especially if you have children.”

This should come as a big surprise to no one.

Next, we point you to Judith Curry’s (herself no stranger to treatment like McArdle's, and worse) excellent blog post in which she provides a 21st-century update to Michael Polanyi’s 1962 essay titled “The Republic of Science: Its Political and Economic Theory.” Curry delivers an introduction to his work (“Polanyi provides an interesting perspective from the mid 20th century, as the U.S. and Europe were contemplating massive public investments in science.  Polanyi’s perspective was colored by his early years in Hungary, which led him to oppose central planning in the sciences.”) and excerpts from Polanyi’s work and then follows with an offering of comments as to how Polanyi’s perspective stands up some half a century later. For instance [embedded links in original]:

Polanyi’s analogy of the scientific process with markets captures the pure incentives that drive scientists – search of truth, intellectual satisfaction and individual ego. What happens when the externalities of the Republic of Science produce perverse incentives, and careerism becomes a dominant incentive that requires publishing a lot of papers rapidly and producing headline-worthy results (who even cares if these papers don’t survive scrutiny beyond their press release)? (see What is the measure of scientific success?) What happens is that you get increasing incidence of scientific fraud (see Science: in the doghouse?), cherry picking and meaningless papers on headline grabbing topics that don’t stand up to the test of time (see Trust and don’t bother to verify).

And what happens when the ‘hand’ guiding science isn’t ‘invisible’, i.e. science is driven by politics, such as a political imperative to move away from fossil fuels and towards renewable energy?  Federal funding can bias science, particularly in terms of selecting which scientific problems receive attention (link).

And what of Polanyi’s statement:  “Such self-coordination of independent initiatives leads to a joint result which is unpremeditated by any of those who bring it about.”  The ‘result’ of dangerous anthropogenic climate change and the harms of dietary fat were hardly unpremeditated.

We also have our own humble opinion on Polanyi, and how he influenced Thomas Kuhn, who, as a result of Polanyi’s view, noted that the intellectual market may not be all that fluid. From “Lukewarming: The New Climate Science that Changes Everything”:

…Polanyi…recognized the horrors of government intervention in science and the pernicious influence of central planning.  He argued that science should be considered a free market with spontaneous order a perspective akin to [a list of libertarian economist luminaries]. Thomas Kuhn, a physicist and philosopher who attended several of Polanyi’s lectures, went him one better and argued in his classic The Structure of Scientific Revolutions that order created paradigms, or encompassing philosophical strucures, that lie at the core of science.

We went on to demonstrate that paradigms must become even more entrenched when the government becomes the monopoly provider of funding for science with political and policy consequences.

Curry offers up these suggestions as to how to improve on the current sad state of scientific affairs [again, links in original]:

So, what should the Republic of Science look like in the 21st century?  The overwhelming issue for the health of science is to reassert the importance of intellectual and political diversity in science, and to respect and even nurture scientific mavericks.  The tension between pure (curiosity driven) science and use-inspired and applied science [see Pasteur’s quadrant] needs to be resolved in a way that supports all three, with appropriate roles for universities, government and the private sector. And finally, the reward structure for university scientists need to change to reward more meaningful science that stands the test of time, versus counting papers and press releases, which may not survive even superficial scrutiny even after being published in prestigious journals that are more interested in impact than in rigorous methods and appropriate conclusions.

Failure to give serious thought to these issues risks losing the public trust and support for elite university science (at least in certain fields).  Scientists are becoming their own worst enemy when they play into the hands of politicians and others seeking to politicize their science.

We urge you to read the whole thing. As always, Curry is insightful, interesting, informative, and right on target.

And finally, we suggest that you ought to have a look at Julie Kelly’s “The EPA vs. Science” in National Review. In this article, Kelly looks at recent developments in the long-running controversy surrounding the use of the herbicide glyphosate (i.e., Roundup) and EPA’s recent released and then withdrawn report on glyphosate’s health effects. Here’s a teaser:

On April 29, the EPA posted a report concluding that glyphosate (the active ingredient in Roundup herbicide and other products) is “not likely to be carcinogenic.” The committee found no relationship between glyphosate exposure and a number of cancers, including leukemia, multiple myeloma, and Hodgkin lymphoma. The 86-page assessment was signed by the EPA’s cancer review committee back in October 2015 and marked “final.”

But the EPA took it down on May 2, claiming the documents were “inadvertently” posted and only a preliminary report. “EPA has not completed our cancer review. We will look at the work of other governments. . . . our assessment will be peer reviewed and completed by end of 2016,” said an EPA spokeswoman.

Kelly notes “GMO foes are now targeting glyphosate in their ongoing campaign against genetically engineered crops” and “[a]ctivists are also using the court system to punish companies that use glyphosate” and adds “[i]t seems that the EPA may be taking some cues from these anti-GMO activists.”

House Science Committee chairman Lamar Smith (R-TX) is looking into what prompted the rather unusual move by the EPA. According to Kelly:

Chairman Smith also senses that EPA foot-dragging might be based more on politics than on science: “That the EPA would remove a report, which was marked as a ‘Final Report’ and signed by thirteen scientists, appears to be yet another example of this agency’s attempt to allow politics rather than science [to] drive its decision making. Sound, transparent science should always be the basis for EPA’s decisions.”

You can check out her full story here.