You Ought to Have a Look: Paris Climate Agreement, Clean Power Plan, Canadian Carbon Taxes, and New Science

This week’s collection of not-to-be-missed stories is larger than most—it’s been a busy week!

First up is an examination by Competitive Enterprise Institute’s Marlo Lewis as to whether or not the Paris Climate Agreement is a treaty requiring the assent of two-thirds of the Senate.

Prior to the U.N.’s climate conference held in Paris last December, President Obama was quick to insist that whatever came out of it would not be considered a “treaty” but rather some sort of “executive agreement.” That’s because it would never get the approval of the Senate that is required under the Constitution in order for it to have the force of law.

Marlo builds the case why the President was unsuccessful and why the Senate should act—now.

Far from being toothless, the Paris Agreement is the framework for a multi-decade global campaign of political pressure directed chiefly against Republican leaders, Red State voters, and the fossil fuel industry. Specifically, the treaty is designed to advance three political objectives:

1. Deter the next president, future Congresses, and even courts from overturning the Environmental Protection Agency’s (EPA) so-called Clean Power Plan (CPP) and other climate regulations, including some not yet proposed, by rebranding those policies as “promises” America has made to the world.

3. Make U.S. energy and climate policy increasingly unaccountable to Congress and to the American people, and increasingly beholden to the demands of foreign leaders, multilateral bureaucrats, international pressure groups, and their media allies.

As a result, he emphatically concludes:

To safeguard America’s economic future and capacity for self-government, congressional leaders must expose Obama’s climate diplomacy as an attempted end-run around the Constitution’s treaty-making process. They should do so before the President signs the Agreement on Earth Day, April 22, at a United Nations ceremony in New York.

The centerpiece of this counteroffensive should be a Sense of Congress resolution emphasizing a clear and simple message: The Paris Agreement is a treaty, and therefore, under Article II, Section 2 of the U.S. Constitution, the United States is not a party, and therefore not bound to its terms, unless the Senate ratifies it. Absent Senate approval, Obama’s climate pledges to the United Nations are just administration proposals, not commitments of the United States.

Be sure to check out the entirety of Marlo’s persuasive essay here.

Next up, we want to draw attention to some (less-than-favorable) opinions about various ideas that are floating around as to how the U.S. may attempt to try to achieve the carbon dioxide emissions limits that President Obama has promised to under the Paris Agreement.

First is an update on Congress’s stance on the EPA’s Clean Power Plan which was stayed by the U.S. Supreme Court earlier this month pending the outcome of a case before the U.S. Court of Appeals in Washington DC. From House Speak Paul Ryan’s blog comes this:

Now that legal fight is heating up. The House and Senate joined together to file an amicus brief to support the states in the State of West Virginia et al v. EPA litigation pending in the U.S. Court of Appeals for the District of Columbia.

We argue that this regulatory onslaught is an illegal, unconstitutional federal power grab. It twists the Clean Air Act to interpret an expansion of federal authority that the law never intended. It usurps the states’ rightful regulatory regimes to accomplish federal ends.

“This move would have stunned both the writers of the Clean Air Act and the founders of our country,” Speaker Ryan, who signed on to the brief along with 171 representatives and 34 senators, said. “It’s a blatant violation of the law of the land—one that will cause a lot of pain around this country. We will not rest until the War on Affordable Energy is stopped.”

Okay, so if things aren’t looking good for the Clean Power Plan, how about a carbon tax?

As Terence Corcoran explains in this piece for the Financial Post, what’s elegant in theory goes terribly wrong in practice. He describes the situation with Canada’s carbon tax:

Touted by economists as a wondrous market mechanism that will deliver Canada from the evils of climate change, carbon pricing is emerging out of the political swamps as a regulatory nightmare.

The original claim was that carbon tax revenue was to be revenue neutral and given back to consumers. As Philip Cross notes on an oped today, “cash-strapped governments in Alberta, Ontario and Quebec are simply raising carbon taxes with no offsetting tax cuts elsewhere.”

We can’t help but to think the same would be the case in the U.S. Read his whole piece for a devastating indictment of a carbon tax.

And last but certainly not least, we’d be remiss if we didn’t highlight a couple of significant science stories that broke during the past week. Here is a quick run-down of the headlines (and the backstories):

Headline: “Seas Are Rising at Fastest Rate in Last 28 Centuries.”

Backstory: The scientific paper which generated this headline actually represents a significant backing down from previous extreme sea level rise projections made by the same scientists. The “new” findings are completely consistent with what is already in the most recent report (AR5) from the Intergovernmental Panel on Climate Change (IPCC). Roger Pielke Jr. summed it up with this pithy tweet: 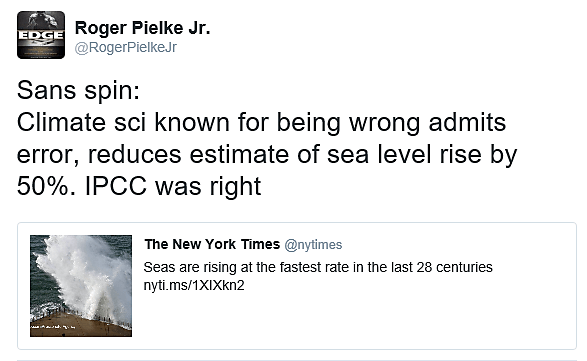 Headline: “Top scientists insist global warming really did slow down in the 2000s.”

Backstory: This is apparently news when it’s reported by “top scientists” who are members of the climate science “mainstream.” But we, and other “skeptics” and “lukewarmers” far and wide, have been saying this for close to a decade. We tweeted:

Headline: “Decline in U.S. Greenhouse Gas Emissions Overestimated by More Than a Third.”

Backstory: Okay, actually, that was our headline from a couple of weeks ago. But no one seemed to take notice then. But now comes a report  that EPA Administrator Gina McCarthy told an energy conference this week “methane emissions from existing sources in oil and gas sector are substantially higher than we previously understood.” We can’t help but to wonder whether this applies to the trend in U.S. methane emissions as well. If so, add this to the list of other accounting irregularities (pointedly documented here) that are going to doom the US greenhouse gas reduction commitment made by President Obama in Paris.

That’s all for now, check in again next week, for more stories of which you ought to have a look. If you can’t wait ‘til then, sometimes you can find a bit of foreshadowing (and a lot of other fun stuff) by following us on Twitter: PCKnappenberger, CatoMichaels, and CatoCSS.