You Ought to Have a Look: Highlights from the House Hearing on Social Cost of Carbon

In case you missed it the House Natural Resources Committee, this week, held a hearing examining the Administration’s determination of the social cost of carbon—that is, how much future damage (out to the year 2300) the Administration deems is caused by the climate change that results from each emitted (metric) ton of carbon dioxide.

As you may imagine from this description, determining a value of the social cost of carbon is an extremely contentious issue, made more so by the fact that the Obama Administration requires that the social cost of carbon, or SCC, be included in the cost/benefit analysis of all federal actions (under National environmental Protection Act, NEPA) and proposed regulations.

Years ago, we warned about how powerful a tool the SCC was in the Administrations hands and have worked to raise the level of public awareness. To summarize our concerns:

The administration’s SCC is a devious tool designed to justify more and more expensive rules and regulations impacting virtually every aspects of our lives, and it is developed by violating federal guidelines and ignoring the best science.

The more people know about this the better.

Our participation in the Natural Resources Committee hearing helped further our goal.

That the hearing was informative, contentious, and well-attended by both the committee members and the general public is a testament to the fact that we have been at least partly successful elevating the SCC from an esoteric “wonky” subject to one that is, thankfully, starting getting the attention it deserves.

In this edition of You Ought to Have a Look, we highlight excerpts from the hearing witnesses, which along with our Dr. Patrick Michaels, included Dr. Kevin Dayaratna (from The Heritage Foundation), Scott Segal (from the Policy Resolution Group) and Dr. Michael Dorsey (from US Climate Plan).  The full written submissions by the witness are available here.

For what it’s worth, Michaels, Dayaratna, and Segal were majority witnesses, while Dorsey was the witness selected by the minority. During the hearing, the US Climate Plan (the organization which Dorsey co-founded and serves as the Vice President of Strategy) sent out this tweet: 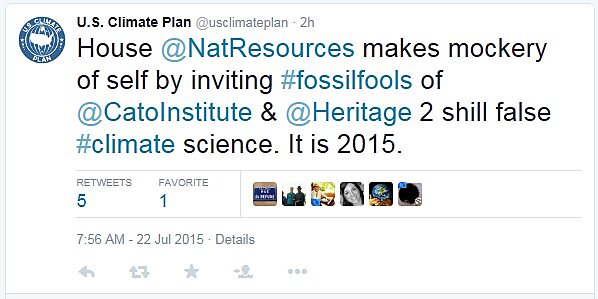 So in the name of fair play, we’ll focus on the testimony of the other three witnesses.

Scott Segal’s testimony detailed why the SCC was a misguided concept that is inappropriate as a basis for federal rulemaking and administrative action, and further, violates the Administrative Procedures Act. Basically, Segal thinks the current SCC determination procedure should be dispensed with. Here’s a tidbit:

[A]s the President’s Climate Action Plan comes further into focus, more and more regulations claiming to reduce carbon emissions as a primary or secondary benefit will use SCC to appear cost-beneficial when the truth might be otherwise. When actual environmental benefits fail to satisfy a skeptical audience, SCC should not be used as Hamburger Helper to make the dish look larger than it really is.

In his testimony, Kevin Dayaratna focused on the models used by the Administration to calculate the social cost of carbon and how sensitive they are to changes in the initial assumptions. Using a different set of assumptions, completely in keeping with other federal guidelines and mainstream science, Dayaratna reported:

Interestingly, under a reasonable set of assumptions, the SCC is overwhelmingly likely to be negative, which would suggest the government should, in fact, subsidize (not limit) carbon dioxide emissions. I do not use these results to suggest that the government should actually subsidize carbon dioxide emissions, but rather to illustrate the extreme sensitivity of these models to reasonable changes to assumptions.

He went on to reasonably conclude:

Our results clearly illustrate that the models used to estimate the SCC are far too sensitive to reasonable changes in assumptions to be useful tools for policymaking.

And finally, Pat’s testimony focused on the scientific shortcoming of the Administration’s SCC procedures. Here’s a juicy section from his written testimony:

Here, I address why this decision [not to alter the SCC in light of new science] was based on a set of flimsy, internally inconsistent excuses and amounts to a continuation of the [Administration’s] exclusion of the most relevant science—an exclusion which assures that low, or even negative values of the social cost of carbon (which would imply a net benefit of increased atmospheric carbon dioxide levels), do not find their way into cost/benefit analyses of proposed federal actions. If, in fact, the social cost of carbon were near zero, it would eliminate the justification for any federal action (greenhouse gas emissions regulations, ethanol mandates, miles per gallon standards, solar/wind subsidies, DoE efficiency regulations, etc.) geared towards reducing carbon dioxide emissions.

A video of Pat’s oral testimony is also available.

No matter how you look at it, whether from the science, the economics, the modelling, or the procedures involved, the Administration’s determination of the social cost of carbon is simply not up to snuff. Rather than playing a major influence in virtually all federal actions, it ought simply be discarded, as it is largely unfixable at this point in time.