You Ought to Have a Look: Climate Sensitivity and Environmental Worries Are Trending Downward

More evidence this week that high-end forecasts of coming climate change are unsupportable and Americans’ worry about environmental threats, including global warming, is declining. Maybe the general public isn’t as out of touch with the science as has been advertised?

First up is a new paper by Bjorn Stevens from Germany’s Max Plank Institute for Meteorology that finds the magnitude of the cooling effect from anthropogenic aerosol emissions during the late 19th and 20th century was less than currently believed, which eliminates the support for the high-end negative estimates (such as those included in the latest assessment of the U.N.’s Intergovernmental Panel on Climate Change, IPCC). Or, as Stevens puts it “that aerosol radiative forcing is less negative and more certain than is commonly believed.”

Despite the large uncertainty range, there is a high confidence that aerosols have offset a substantial portion of [greenhouse gas] global mean forcing.

The new Stevens’ result—that the magnitude of the aerosol forcing is less—means the amount of greenhouse gas-induced warming must also be less; which means that going forward we should expect less warming from future greenhouse gas emissions than climate models are projecting.

Researcher Nic Lewis, who has done a lot of good recent work on climate sensitivity, was quick to realize the implications of the Stevens’ results. In a blog post over at Climate Audit, Lewis takes us through his calculations as to what the new aerosols cooling estimates mean for observational determinations of the earth’s climate sensitivity.

What he finds is simply astounding.

Instead of the IPCC’s estimate that the equilibrium climate sensitivity likely lies between  1.5°C and 4.5°C, Lewis finds the likely range to be 1.2°C to 1.8°C (with a best estimate of 1.45°C). Recall that the average equilibrium climate sensitivity from the climate models used by the IPCC to make future projections of climate change and its impacts is 3.2°C—some 120% greater than Lewis’ best estimate. But perhaps even more important than the best estimate is the estimate of the upper end of the range, which drops from the IPCC’s 4.5°C down to 1.8°C.

This basically eliminates the possibly of catastrophic climate change—that is, climate change that proceeds at a rate that exceeds our ability to keep up. Such a result will also necessarily drive down estimates of social cost of carbon thereby undermining a key argument use by federal agencies to support increasingly burdensome regulations which seek to reduce greenhouse gas emissions.

If this Stevens/Lewis result holds up, it is the death blow to global warming hysteria.

Which brings us to the last results of Gallup’s annual poll gauging the level of environmental concern among Americans—something the polling agency has been keeping track of since the late 1980s.

Americans' concern about several major environmental threats has eased after increasing last year. As in the past, Americans express the greatest worry about pollution of drinking water, and the least about global warming or climate change.

Importantly, even as global warming has received greater attention as an environmental problem from politicians and the media in recent years, Americans' worry about it is no higher now than when Gallup first asked about it in 1989. 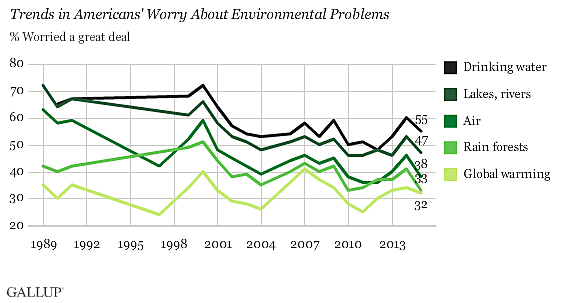 Says something about the effectiveness of the climate alarm campaign.

The full set of questions and results are available here. You ought to have a look!