You Ought to Have a Look: Clean Power Plan Comes Under Fire

You Ought to Have a Look is a feature from the Center for the Study of Science posted by Patrick J. Michaels and Paul C. (“Chip”) Knappenberger.  While this section will feature all of the areas of interest that we are emphasizing, the prominence of the climate issue is driving a tremendous amount of web traffic. Here we post a few of the best in recent days, along with our color commentary.

We’ll start out with one of the best quotes we’ve come across in recent memory. It’s from the inimitable Matt Ridley in his piece, "The Green Scare Problem" from the Wall Street Journal last week:

Making dire predictions is what environmental groups do for a living, and it’s a competitive market, so they exaggerate.

Ridley goes on to describe a growingly familiar list of now-failed environmental apocalypses that had been, at one point in time, predicted to befall us—pesticides, ozone hole, acid rain, GMOs, etc. Climate change calamity, as is being pushed by President Obama and the EPA to justify their ever-expanding restrictions of our carbon dioxide emissions, is the latest addition to Ridley’s list. Ridley’s main point is that the “we’re doomed if we don’t do what the environmental pressure groups tell us, and saved if we do” push “has frequently turned out to be really bad advice.” Ridley foresees more of the same from Obama’s Clean Power. We’re inclined to agree.

Be sure to check out Matt’s full column in which he backs up his opinions. It well worth the time spent reading.

When it comes to selling the Clean Power Plan, President Obama and his EPA go to such extreme lengths that they run up against (and often exceed) the bounds of sound science. We’ve addressed many of these transgressions. Climate impact of the Plan? Zilch. Health impacts from the Plan. Non-existent. Economic stimulus of the Plan? Negative. Validity of calling “carbon dioxide emissions” “carbon pollution”? None. 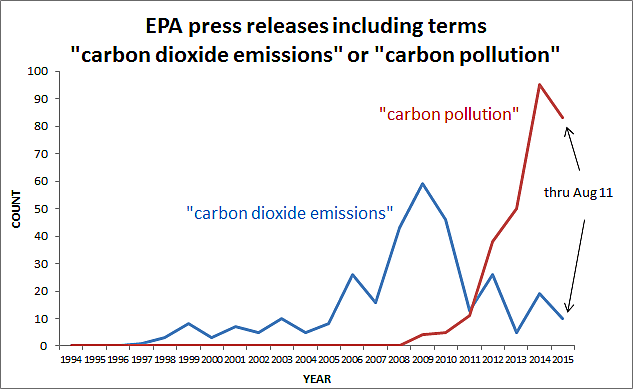 Figure 1. Number of press releases each year since 1994 (through August 11, 2015) issued by the U.S. Environmental Protection Agency which contained either the phrase “carbon dioxide emissions” or “carbon pollution.”

When a straight up telling of the situation fails to impress, try dressing it up with something a bit scarier-sounding.

And finally, if the Obama Administration isn’t going to have its hands full dealing with challenges by states and industries who are opposed to the Clean Power Plan for myriad reasons, it’ll also have to defend itself against a lawsuit from a group of youths who think that the Clean Power Plan doesn’t go far enough:

"It's really important that the court step in and do their jobs when there's such intense violation of constitutional rights happening," [Julia] Olson [lead council on the case] said.

Nothing like a lawsuit that is suing for the impossible!