Would You Trade Higher Taxes for Much Lower Spending and Less Red Tape?

I dislike taxes as much as the next person (and probably a lot more), but other policies matter as well, so if I had the choice of replacing current government policies with the ones that existed at the end of the Clinton years, I would gladly make that trade. Yes, it would mean higher tax rates, but it also would mean slashing government spending from 24 percent of GDP down to 18 percent of GDP. It would mean no sleazy TARP bailout, no Sarbanes‐​Oxley red tape, no expansion of Fannie Mae and Freddie Mac, and no added power and authority for the federal government.


This is the argument that I made in this interview on CNBC, though my opponent tried to do his version of the Brezhnev Doctrine (what’s mine is mine, what’s yours is negotiable), so I concluded the interview by stating that in the real world higher taxes are completely unacceptable.

To elaborate on this discussion, here’s a chart showing actual revenue over the past decade and what spending would be if policy makers had simply maintained the overall budget level from the last year of the Clinton Administration and allowed spending to grow in line with inflation and population. The deficit would be much smaller. More important, the burden of federal spending would be almost $1 trillion lower. 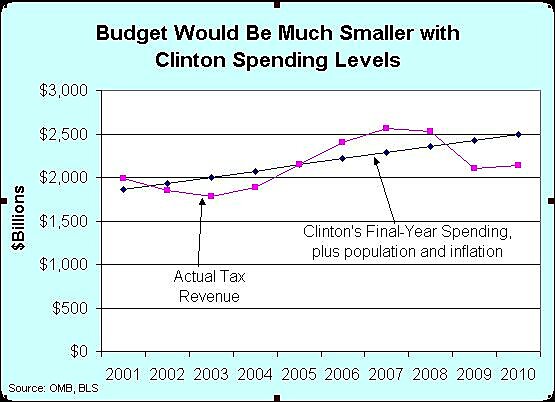