Remember when you were a kid and your parents would either be happy or angry depending on whether your report card said you were trying hard or being a slacker? No matter whether your grades were good or bad, it helped to get an "A for Effort."

But sometimes a high level of effort isn't a good thing.

The World Bank has a new study that measures national tax burdens. But instead of using conventional measures, such as top tax rates or tax collections as a share of GDP, the international bureaucracy has developed an index that measures "tax effort" and "tax capacity" after adjusting for variables such as per-capita GDP, corruption, and demographics.

One goal of the study is to develop an apples-to-apples way of comparing tax burdens for nations at various levels of development. Poor nations, for instance, tend to have low levels of tax revenue even though they often have high tax rates. This is partly because of Laffer Curve reasons, but perhaps even more so because of corruption and incompetence. Rich nations, by contrast, usually have much greater ability to enforce their tax codes. So if you want to compare the tax system of Paraguay with the tax system of Sweden, you need to take these factors into account.

Here's a description of how the authors addressed this issue.

Measuring taxation performance of countries is both theoretically and practically challenging. ...tax economists have attempted to deal with this problem by applying an empirical approach to estimate the determinants of tax collection and identify the impact of such variables on each country’s taxable capacity. The development of a tax effort index, relating the actual tax revenues of a country to its estimated taxable capacity, provides us with a tempting measure which considers country specific fiscal, demographic, and institutional characteristics. ...Tax effort is defined as an index of the ratio between the share of the actual tax collection in GDP and the taxable capacity.

This is a worthwhile project. There sometimes are big differences between nations and those should be part of the equation when comparing tax policies. Indeed, this is why my recent post on the rising burden of the value-added tax looked at data for nations at different levels of development.

But I'm irked by the World Bank study because it's really measuring "tax onerousness." I'm not even sure onerousness is a word, but I sure don't like the term "tax effort" because it implies that a higher tax burden is a good thing. After all, we learned from our report cards that it's good to demonstrate high effort and not be a slacker.

And just so you know I'm not just imagining things, the authors explicitly embrace the notion that bigger tax burdens are desirable. They assert (without any evidence, of course) that higher levels of tax promote "development" and that more money for politicians is "desirable."

The international development community is increasingly recognizing the centrality of effective taxation to development. ...higher tax revenues are important to lower the aid dependency in low-income countries. They also encourage good governance, strengthen state building and promote government accountability. ...many developing countries experience a chronic gap between the actual and desirable levels of tax revenues. Taxation reforms are needed to close this gap.

If the authors of the study looked at economic history, they would understand that they have things backwards. "Effective taxation" doesn't lead to "development." It's the other way around. The western world became rich when the burden of government was very small and most nations didn't even have income tax regimes. It was only after nations because prosperous that politicians figured out how to extract significant shares of economic output.

But let's set that aside and see which nations have the most and least onerous tax systems. Here's a table from the report and it seems that Papua New Guinea has the world's worst tax system and Bahrain has the best tax system. Among developed nations, New Zealand is the worst and Japan is the best. The United States (circled in red) gets a decent score. We're not nearly as good as Switzerland and we're slightly worse than Canada, but our politicians expend less "effort" than their counterparts in nations such as France, Italy, and Belgium.

By the way, I'm not endorsing either the methodology or the results. I like what the authors are trying to do (at least in terms of creating an apples-to-apples measure), but some of the results seem at odds with reality. New Zealand's tax system isn't great, but it certainly doesn't seem as bad as the French tax code. And I have a hard time believing that Japan's tax code is less onerous than the Swiss system.

The World Bank study also breaks down the data so that countries can be put into a matrix based on how much money they collect and how much "effort" they expend. 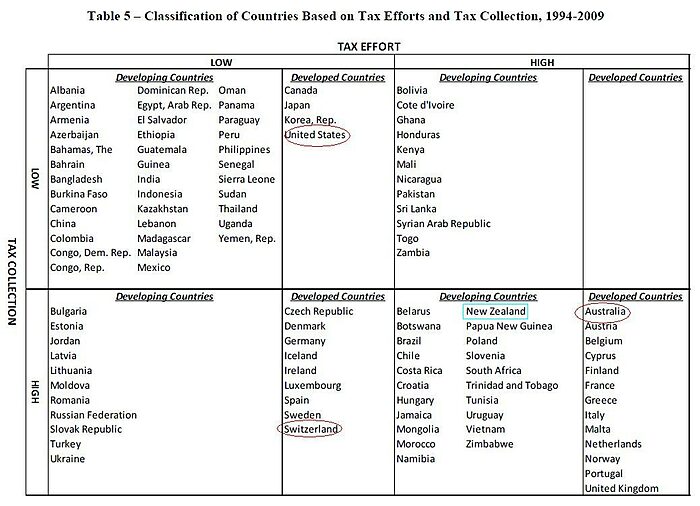 Here's where the authors let their bias show. In their descriptions of the various boxes, they reflexively assume that higher tax collections are a good thing. Here is some of what they wrote in that section of the study.

The collection of taxes in this group of countries is currently low and lies below their respective taxable capacity. These countries have potential to succeed in deepening comprehensive tax policy and administration reforms focusing on revenue enhancement. ...Botswana and Chile were originally in the low-effort, low-collection group, but they made it to the high-effort, high-collection group after recent improvements in revenue performance. ...Although countries in this [high collection, low effort] group have already achieved a high tax collection, fiscally they still have the potential to implement reforms to reduce distortions and reach a higher level of efficiency of tax collection, since their tax effort index is low.

Very Orwellian, wouldn't you say? We're supposed to conclude that it's bad if nations are "below their respective taxable capacity" because they can "succeed in deepening comprehensive tax policy" for purposes of "revenue enhancement." Other nations, though, got gold stars because of "improvements in revenue performance." And others were encouraged to try harder, even if they already collected a lot of revenue, in order to "reach of a higher level of efficiency of tax collection."

But, to be fair, the study does include some semi-sensible comments acknowledging that there are limits to the greed of the political class. For all intents and purposes, the authors warn that there will be Laffer Curve effects if "high effort" nations seek to make their tax systems even more onerous.

Given that the level of tax intake in this group of countries is already high and stays above their respective taxable capacity, a further increase in tax revenue collection may lead to unintended economic distortions. ...low-income countries with a low level of tax collection but high tax effort have less opportunity to increase tax revenues without possibly creating distortions or high compliance costs.

So the fact that the World Bank recognizes that taxes can hurt economic performance in at least some circumstances puts them ahead of the Congressional Budget Office and Joint Committee on Taxation. That's damning with faint praise, to be sure, but I wanted to close on an upbeat note.

P.S. If you peruse the matrix, you'll notice that New Zealand is considered a developing country. I'm sure that will be the source of amusement to my friends in Australia.