Will Republicans Choose Sequester Savings or a Supercommittee Surrender?

The budget fights this year began with the "shutdown" battle, followed by the Ryan budget and then the debt limit. These fights have mostly led to uninspiring kiss-your-sister outcomes, which is hardly surprising given divided government.

Now the crowd in DC is squabbling over Obama's latest stimulus/tax-the-rich scheme, though that's really more of a test run by the White House to determine whether class warfare will be an effective theme for  the 2012 campaign.

The real budget fight, the one we should be closely monitoring, is what will happen with the so-called Supercommittee.

To refresh your memory, this is the 12-member entity created as part of the debt limit legislation. Split evenly between Democrats and Republicans, the Supercommittee is supposed to recommend $1.2 trillion-$1.5 trillion of deficit reduction over the next 10 years. Assuming, of course, that 7 out of the 12 members can agree on anything.

There are two critical things to understand about the Supercommittee.

With these points in mind, it doesn't take a genius to realize that the Supercommittee is designed -- at least from the perspective of the left -- to seduce gullible Republicans into going along with a tax hike.

In other words, the likelihood that the Supercommittee will produce a good plan is about the same as seeing me in the outfield during the World Series (the real World Series, not this one).

Fortunately, there is a way to win this fight. All Republicans have to do is...(drum roll, please)...nothing.

To be more specific, if the Supercommittee can't get a majority for a plan, then automatic budget cuts (a process known as sequestration) will go into effect. But don't get too excited. We're mostly talking about the DC version of spending cuts, which simply means that spending won't rise as fast as previously planned.

But compared to an inside-the-beltway tax-hike deal, a sequester would be a great result.

You're probably wondering if there's a catch. After all, if Republicans can win a huge victory for taxpayers by simply rejecting the siren song of higher taxes, then isn't victory a foregone conclusion?

It should be, but Republicans didn't get the reputation of being the "Stupid Party" for nothing, and they are perfectly capable of snatching defeat from the jaws of victory.

There are three reasons why Republicans may fumble away victory, even though they have a first down on the opponent's one-yard line.

If GOPers sell out for either of the first two reasons, then there's really no hope. America will become Greece and we may as well stock up on canned goods, bottled water, and ammo.

The defense issue, though, is more challenging. Republicans instinctively want more defense spending, so Democrats are trying to exploit this vulnerability. They are saying -- for all intents and purposes -- that the defense budget will be cut unless GOPers agree to a tax hike.

Republicans should not give in to this budgetary blackmail.

I could make a conservative case for less defense spending, by arguing that the GOP should take a more skeptical view of nation building (the approach they had in the 1990s) and that they should reconsider the value of spending huge sums of money on an outdated NATO alliance.

But I'm going to make two other points instead, in hopes of demonstrating that a sequester is acceptable from the perspective of those who favor a strong national defense.

This chart shows what will happen to the defense budget over the next 10 years, based on Congressional Budget Office data comparing "baseline" outlays to spending under a sequester. 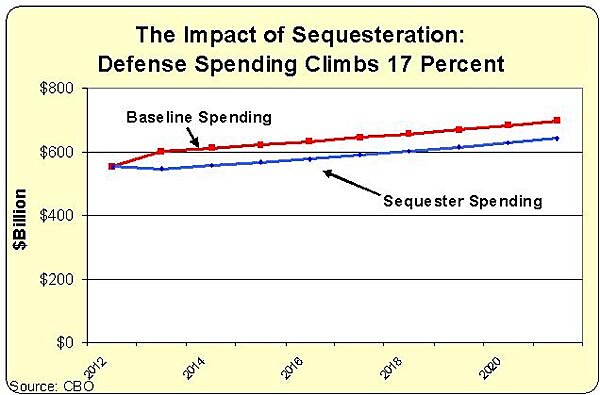 As you can see, even with a sequester, the defense budget climbs over the 10-year period by about $100 billion. And, as noted above, that doesn't even factor in supplemental spending bills.

In other words, America's national defense will not be eviscerated if there is a sequester.

Here's the bottom line. The Supercommittee battle should be a no-brainer for the GOP.

They can capitulate on taxes, causing themselves political damage, undermining the economy, and enabling bigger government.

Or they can stick to their no-tax promise, generating significant budgetary savings with a sequester, and boosting economic performance by restraining the burden of government.