David Ranson had a good column earlier this week in the Wall Street Journal explaining that federal tax revenues historically have hovered around 19 percent of gross domestic product, regardless whether tax rates are high or low. One reason for this relationship, as he explains, is that the Laffer Curve is a real-world constraint on class warfare tax policy. When politicians boost tax rates, that motivates taxpayers to earn and/or report less income to the IRS:

The feds assume a relationship between the economy and tax revenue that is divorced from reality. Six decades of history have established one far-reaching fact that needs to be built into fiscal calculations: Increases in federal tax rates, particularly if targeted at the higher brackets, produce no additional revenue. For politicians this is truly an inconvenient truth. ...tax revenue has grown over the past eight decades along with the size of the economy. It illustrates the empirical relationship first introduced on this page 20 years ago by the Hoover Institution's W. Kurt Hauser—a close proportionality between revenue and GDP since World War II, despite big changes in marginal tax rates in both directions. "Hauser's Law," as I call this formula, reveals a kind of capacity ceiling for federal tax receipts at about 19% of GDP. ...he tax base is not something that the government can kick around at will. It represents a living economic system that makes its own collective choices. In a tax code of 70,000 pages there are innumerable ways for high-income earners to seek out and use ambiguities and loopholes. The more they are incentivized to make an effort to game the system, the less the federal government will get to collect.

Several people have asked my opinion about the piece. I like the column, of course, but I'm not nearly so optimistic that 19 percent of GDP represents some sort of limit on the federal government's taxing power. There are many nations in Europe with tax burdens closer to 50 percent, for instance, so governments obviously have figured how to extract much higher shares of national output. Part of the difference is because America has a federal system, and state and local governments collect taxes of about 10 percent of GDP. That still leaves a significant gap in total tax collections, though, so the real question is why American politicians are not as proficient as their European cousins at confiscating money from the private sector?

One reason is that European countries have value-added taxes, which are a disturbingly efficient way of generating more revenue. So does this mean that "Hauser's Law" will protect us if politicians are too scared to impose a nationwide sales tax? That's certainly a necessary condition for restraining government, but probably not a sufficient condition. If you look at the table, which is excerpted from the OECD's annual Revenue Statistics publication, you can see that nations such as New Zealand and Denmark have figured out how to extract huge amounts of money using the personal and corporate income tax.

In some cases, tax rates are higher in other nations, but the main factor seems to be that the top tax rates in other nations are imposed at much lower levels of income. Americans don't get hit with the maximum tax rate until our incomes are nine times the national average. In other nations, by contrast, the top tax rates take effect much faster, in some cases when taxpayers have just average incomes. In other words, European nations collect a lot more money because they impose much higher tax rates on ordinary people. Here's a chart I put together a few years ago for a paper I wrote for Heritage (you can find updated numbers in Table 1.7 of this OECD website, but the chart will still look the same). 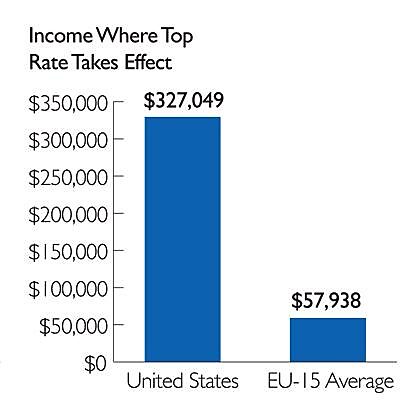 Europeans also sometimes impose high tax rates on rich people, but this is not the reason that tax receipts consume nearly 50 percent of GDP in some nations. Rich people in Europe, like their counterparts in America, have much greater ability to control the amount of taxable income that is earned and/or reported. These "Laffer Curve" responses limit the degree to which politicians can finance big government on the backs of a small minority.