Will Biden Turn the Education Department over to the Teachers Unions?

President‐​elect Biden is rumored to be considering a teachers union head to be his secretary of education. Since the Education Department was essentially created by the National Education Association, this is basically just confirming their control. It’s understandable that Biden would promise to name a teacher for this post. After all, who knows education better than teachers? It no doubt sounds good to voters. But imagine a candidate promising to name a defense contractor as secretary of defense, an oil company CEO as secretary of energy, or a real estate developer as HUD secretary. For each of those the candidate could plausibly raise the same argument, that few others would know more about the subject. But there would be a lot more public skepticism about naming a provider of the service to run the federal department in those cases.

We didn’t always have a federal Department of Education, of course. It only goes back to 1979. Education was historically a matter for local communities, with increasing state‐​level involvement over the years. What happened in 1979? As the Oxford University historian Gareth Davies explains,

[President Jimmy] Carter would not have fought for the bill, and most likely would not even have endorsed it, had it not been for the unprecedented influence that the National Education Association enjoyed within his White House. In earlier years, education client groups had come to enjoy great influence within Congress, the judiciary, and the federal bureaucracy. Now, it seemed, the most important single such group had gained considerable influence within the White House, too.

Those changes were a result of the transformation of the NEA from a carefully bipartisan professional association to a politically active labor union, and in particular its heavy involvement in the 1976 Democratic presidential primaries.

Not everyone supported the establishment of the federal department, even on the Democratic side of the aisle. The American Federation of Teachers, fearing that the department would be controlled by its rival, the NEA, organized opponents. Sen. Daniel Patrick Moynihan, who was close to AFT leader Albert Shanker, led Senate opposition and called Carter’s bill “a backroom deal born out of squalid politics.”

The New York Times editorialized, “The supporters of a separate department [of education] speak vaguely of the need for a federal policy on education. We believe that they misunderstand the nature of American education, which is characterized by diversity. The legitimate centers of gravity are, and ought to remain, in the educational authorities of the states and the local communities.”

Many such critics warned that a secretary of education would turn into a national minister of education. Rep. John Erlenborn (R-IL), for instance, wrote, “There would be interference in textbook choices, curricula, staffing, salaries, the make‐​up of student bodies, building designs, and all other irritants that the government has invented to harass the population. These decisions which are now made in the local school or school district will slowly but surely be transferred to Washington.”

Such concerns were not limited to Republicans. Rep. Patricia Schroeder (D‐​Colo.) predicted, “No matter what anyone says, the Department of Education will not just write checks to local school boards. They will meddle in everything. I do not want that.” David W. Breneman and Noel Epstein wrote in the Washington Post, “Establishing a cabinet‐​level department is a back‐​door way of creating a national education policy.” And Richard W. Lyman, president of Stanford University, testified before Congress that “the two‐​hundred‐​year‐​old absence of a Department of Education is not the result of simple failure during all that time. On the contrary, it derives from the conviction that we do not want the kinds of educational systems that such arrangements produce.” A Washington Post editorial raised the fear that “by sheer bureaucratic momentum, [a department of education] would inevitably erode local and state control over public schools.” Another Post editorial reminded us, “Education remains a primary function of the states and localities, which is surely one reason this country has not had a national ministry of education as part of its political tradition. We think it is a tradition worth holding on to.”

The critics failed, of course. Congress and President Carter created a federal Department of Education. And over the past 40 years, what have been the results? Neal McCluskey wrote in the Cato Handbook for Policymakers:

To assess learning in the modern era, the most consistent, national measure we have is the National Assessment of Educational Progress (NAEP) Long‐​Term Trend Assessment. The assessment is a federal test given to a nationally representative sample of students — but without stakes attached and, thus, insulated against “gaming” — which has remained largely consistent since the 1970s. What does it show? Looking at 17‐​year‐​olds over the decades, achievement is almost completely flat, even though — as Figure 47.1 shows — the inflation‐​adjusted expenditure on the average student’s education has nearly tripled. That trend has been largely echoed by SAT scores; after controlling for numerous variables including self‐​selection of test takers, we see that those scores have also stagnated.

How about learning? Well, Neal offers this chart, which ought to be the starting point for any discussion of schools and school funding: 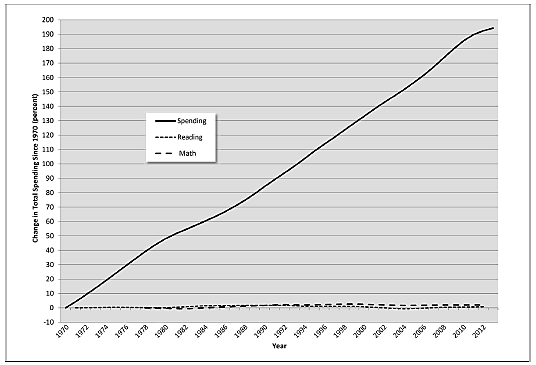 Spending on schools has risen steadily. Test scores have been flat. And indeed the federal government has gradually extended its intervention in local schools. As far back as 1994 the Government Accountability Office estimated that although the federal government provided less than 10 percent of K–12 education financing, federal regulations caused more than 40 percent of the administrative burden felt by state education agencies. Such burdens and strings have only increased, in areas from curriculum to bathroom access, most recently under both the Obama and Trump administrations.

Education is not mentioned in the Constitution of the United States, and for good reason. The Founders wanted most aspects of life managed by those who were closest to them, either by state or local government or by families, businesses, and other elements of civil society. Certainly they saw no role for the federal government in education. Once upon a time, not so very many years ago, Congress understood that. The History of the Formation of the Union under the Constitution, published by the United States Constitution Sesquicentennial Commission, under the direction of the president, the vice president, and the Speaker of the House in 1943, contained this exchange in a section titled ‘‘Questions and Answers Pertaining to the Constitution’’:

Q. Where, in the Constitution, is there mention of education?

A. There is none; education is a matter reserved for the states.

The greatest service Congress and the Biden administration could perform for American education would be to rekindle the original understanding of the delegated, enumerated, and thus limited powers of the federal government and to return control and financing of education to states, localities, and families. Failing that, the administration should stop imposing new burdens and controls on 15,000 local school districts.