Why We Honor George Washington

Today is some vaguely named "Presidents' Day," but Wednesday is the anniversary of George Washington's birth. So it's a good day to remember the contribution he made to the American republic. I wrote this several years ago:

George Washington was the man who established the American republic. He led the revolutionary army against the British Empire, he served as the first president, and most importantly he stepped down from power. 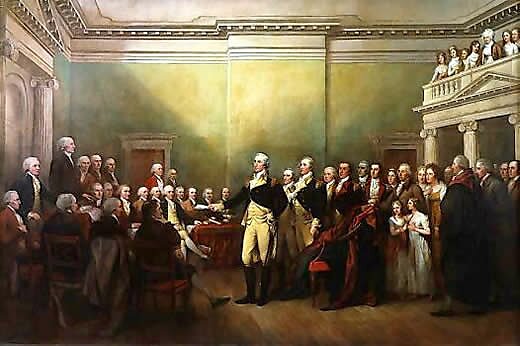 In an era of brilliant men, Washington was not the deepest thinker. He never wrote a book or even a long essay, unlike George Mason, Thomas Jefferson, James Madison, Alexander Hamilton, and John Adams. But Washington made the ideas of the American founding real. He incarnated liberal and republican ideas in his own person, and he gave them effect through the Revolution, the Constitution, his successful presidency, and his departure from office.

What’s so great about leaving office? Surely it matters more what a president does in office. But think about other great military commanders and revolutionary leaders before and after Washington—Caesar, Cromwell, Napoleon, Lenin. They all seized the power they had won and held it until death or military defeat.

John Adams said, “He was the best actor of presidency we have ever had.” Indeed, Washington was a person very conscious of his reputation, who worked all his life to develop his character and his image.

In our own time Joshua Micah Marshall writes of America’s first president, “It was all a put-on, an act.” Marshall missed the point. Washington understood that character is something you develop. He learned from Aristotle that good conduct arises from habits that in turn can only be acquired by repeated action and correction – “We are what we repeatedly do.” Indeed, the word “ethics” comes from the Greek word for “habit.” We say something is “second nature” because it’s not actually natural; it’s a habit we’ve developed. From reading the Greek philosophers and the Roman statesmen, Washington developed an understanding of character, in particular the character appropriate to a gentleman in a republic of free citizens.

What values did Washington’s character express? He was a farmer, a businessman, an enthusiast for commerce. As a man of the Enlightenment, he was deeply interested in scientific farming. His letters on running Mount Vernon are longer than letters on running the government. (Of course, in 1795 more people worked at Mount Vernon than in the entire executive branch of the federal government.)

He was also a liberal and tolerant man. In a famous letter to the Jewish congregation in Newport, Rhode Island, he hailed the “liberal policy” of the United States on religious freedom as worthy of emulation by other countries. He explained, “It is now no more that toleration is spoken of as if it were the indulgence of one class of people that another enjoyed the exercise of their inherent natural rights, for, happily, the Government of the United States, which gives to bigotry no sanction, to persecution no assistance, requires only that they who live under its protection should demean themselves as good citizens.”

And most notably, he held “republican” values – that is, he believed in a republic of free citizens, with a government based on consent and established to protect the rights of life, liberty, and property.

From his republican values Washington derived his abhorrence of kingship, even for himself. The writer Garry Wills called him “a virtuoso of resignations.” He gave up power not once but twice – at the end of the revolutionary war, when he resigned his military commission and returned to Mount Vernon, and again at the end of his second term as president, when he refused entreaties to seek a third term. In doing so, he set a standard for American presidents that lasted until the presidency of Franklin D. Roosevelt, whose taste for power was stronger than the 150 years of precedent set by Washington.

Give the last word to Washington’s great adversary, King George III. The king asked his American painter, Benjamin West, what Washington would do after winning independence. West replied, “They say he will return to his farm.”

“If he does that,” the incredulous monarch said, “he will be the greatest man in the world.”