The economic plight of low-skilled workers has received considerable attention during the presidential campaign. The problem is older than the primary season however, as the share of prime-age U.S. workers without a high school degree with jobs has been declining for decades. Yet at the same time, low-skilled immigrant men have been unaffected by this trend. While some commentators have attempted to blame the failure of native-born men to work on immigrants, the evidence points to other causes.

This post will expand on the lessons from Nicholas Eberstadt’s wonderful new book Men Without Work to give five reasons why low-skilled men who have immigrated to the United States tend to work more often than similarly educated men who were born here.

Figure 1 highlights the problem. For as far back as we have data, immigrant men without high school degrees in their prime years (25-54) have held jobs far more often than similar native-born men. Moreover, the gap in employment between the average low-skilled immigrant man and the similar native-born man is growing. In 1995, there was an 18 percentage point difference in the employment rates of the two groups. By 2014, the difference was 31 points. 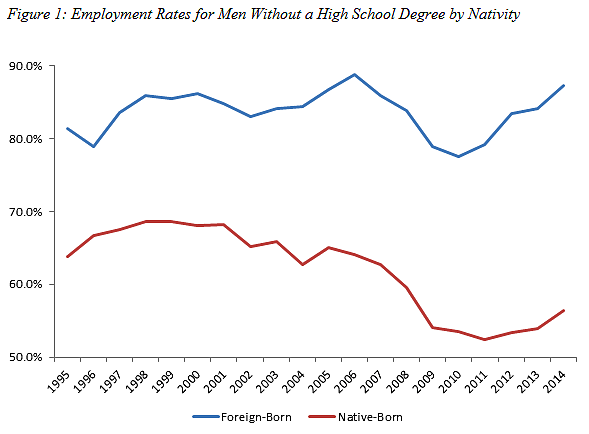 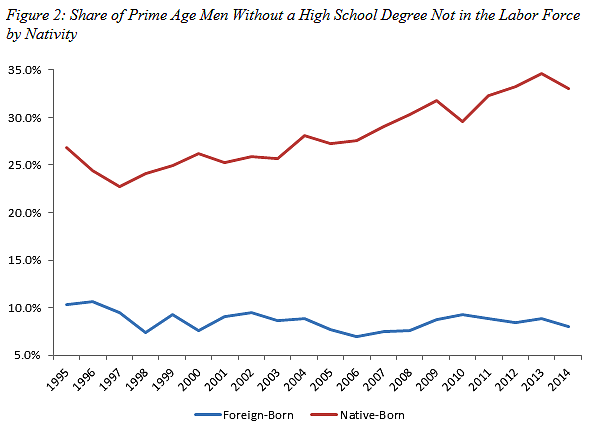 2. Low-skilled immigrants use less welfare. As a 2013 paper by the Cato Institute demonstrated, poor immigrants use significantly less welfare than poor native-born citizens. Moreover, as I have shown previously, immigrant labor force participation rates grew in response to the welfare reform that Congress passed in 1996. The 1996 law barred all noncitizens from welfare, except for legal permanent residents who had been in the country for more than five years. This incentivized them to seek jobs, and during this time, overall immigrant employment rates surpassed the native-born rates. This surge in employment caused their income to rise so much that their rates of poverty actually declined. Native-born men have faced much less pressure to reenter the labor market.

3. Low-skilled immigrant men commit far fewer crimes. Immigrant men are much less likely to be incarcerated than similar native-born men. Figure 3 provides the incarceration rates for native and foreign-born men ages 18 to 39, and in every Census year since 1980, the foreign-born rate is half or less than half the native-born rate. This is also true for high school dropouts from the top sending countries for unauthorized immigrants. Almost 1 in 9 native-born men ages 18 to 39 without a high school degree was incarcerated in 2010, compared to just 1 in 59 Mexican-born men. Criminal records and unemployment resulting from incarceration provide serious obstacles to the ability of native-born men to find employment. 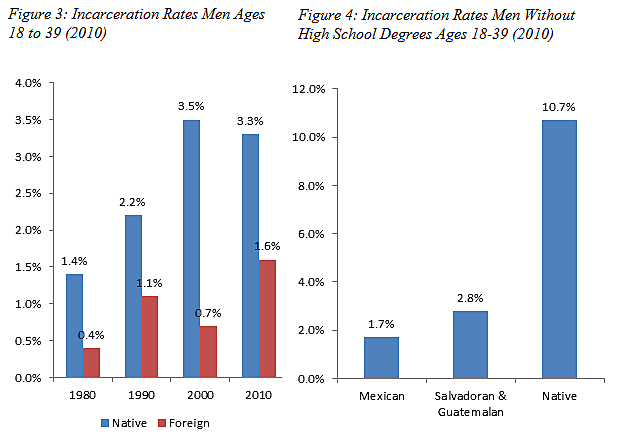 4. Low-skilled immigrant men are more likely to marry. For both immigrants and natives, married prime-age men are much more likely to work than never-married men (Figure 5). For immigrants, there was an almost 10 percentage point difference in employment rates between these two groups of men. Natives had nearly twice the gap. As Figure 6 shows, low-skilled immigrant men were nearly twice as likely to be married in 2014. The best theory is that married men are more motivated to work because they often need to provide for their families. 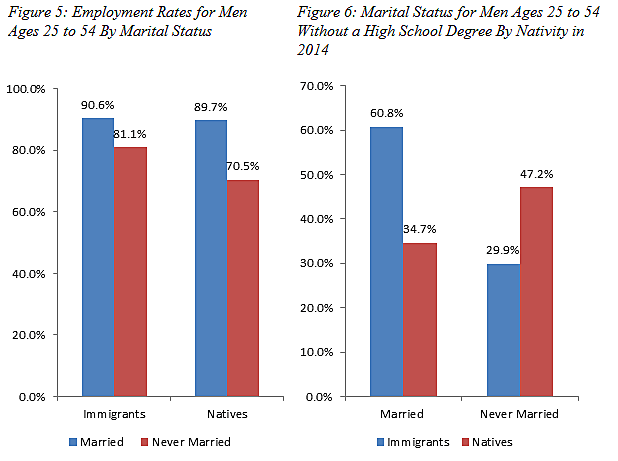 5. Native male workers are more likely to get educated. As I have previously explained, the greater share of natives who fail to graduate high school or obtain employment is explained entirely by the fact that working natives are much more likely to get educated today than in the past. In fact, as Figure 7 shows, the absolute number of native-born high school dropouts without work (purple line) has actually declined slightly since 1995, just not as quickly as the total population of dropouts has declined (red line). As native workers are leaving this population by getting educated, low-skilled immigrants are entering from abroad (blue line) and finding jobs much faster than others are leaving the workforce (green line). 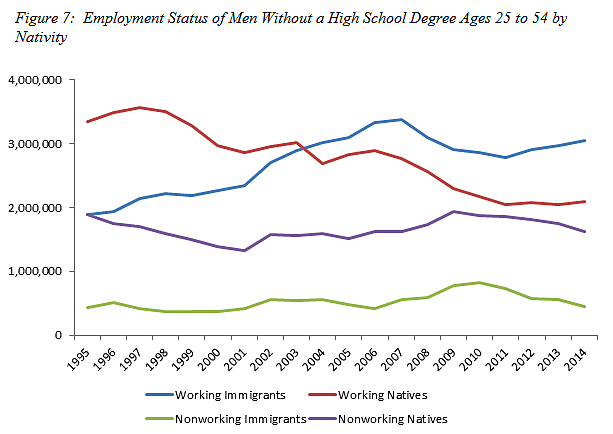 No matter their race or educational status, married men raising a family work more, and never-married men without children or children in their home work less. No matter their ethnicity or race, prime-age men who come to this country work more than those here by birth. Neither a wedding nor a green card confers innate advantage in the competition for jobs. Rather, marriage and migration decisions point to motivations, aspirations, priorities, values, and other intangibles that do so much to explain real-world human achievements.

Government policies—such as reforming welfare programs and the criminal justice system—could help some of these native-born Americans to reenter the labor force. But the main reason that low-skilled immigrant men work more often than other low-skilled men is that these immigrants have made better personal decisions. They seek out work and commit fewer crimes. They start and provide for their families. They make these decisions despite facing stiffer competition for jobs from newer immigrants and lacking the language proficiency of native workers—the most important hurdle to employment in the United States.

In other words, immigrants don’t just provide important economic benefits by preventing the U.S. labor force from declining—they are also bringing with them many important cultural benefits that the United States desperately needs. Punishing these immigrant workers will not aid struggling native-born workers—it will only hurt them and the economy as a whole.