Why I Despise Government, Reason 9,358

Leaving work yesterday for some softball games, I wound up caught in terrible traffic on 15th Street, which is a major D.C. artery for commuters going to Viriginia. This is never a good street to be on since it carries people looking to head south on I-395 and those who want to turn right on Constitution Avenue and then go west into Virginia.


After a 30+ minute crawl to travel three blocks, I finally got close to Constitution Avenue, where the road widens to three lanes, one of which is only for right turns. But since a large number of drivers want to turn right, it is very common for drivers also to turn right from the center lane — which normally is very efficient since Constitution Avenue has three lanes and the traffic flows more smoothly with two lanes of traffic making the right turn.


But when I made the right turn, I discovered why traffic was so snarled on 15th Street. There was a cop standing in the middle of Constitution Avenue waiting to snare drivers turning right from the center lane. Along with many other drivers that day, I got caught and lost another 10 minutes waiting for a ticket. But the $25 ticket is not what got me so irritated. It was the fact that thousands of commuters had to deal with horrible traffic (not only because people like me suddenly got stopped and traffic behind us also had to stop, but also because people in the right‐​turn‐​only lane also could not move with the cop blocking traffic) because some bureaucrat from the National Park Police found an easy way to fill his ticket quota.


If the private sector operated the roads (permit me to engage in some libertarian fantasizing), this would never happen. Because of a desire to please drivers (customers), the folks in charge of the road would have made right turns an option from the center lane. But when government sees a bottleneck, the reaction of politicians and bureaucrats is to figure out how to fleece people for more money — not to make travel safer and quicker.


Now, perhaps, you will understand why I chose this license plate. 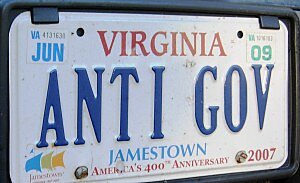