Why High‐​Speed Rail Is a Ridiculous Fantasy

High-speed rail supporter Alfred Twu has gotten a lot of attention for having boldly drawn a map of where he thinks high-speed trains should go. Never mind that Twu's map is even more absurd than Obama's plan. What's sad is that the romance of trains still manages to hold peoples' attention long after passenger trains have become technologically and economically obsolete. 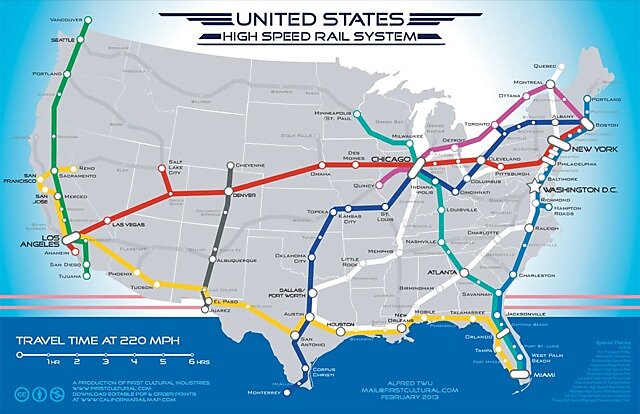 Slate calls this the "liberals' dream [of] what America's high-speed rail network looks like."

Anybody can draw a map, and that map is likely to reflect their own particular preferences. My ideal high-speed rail line would connect my home in Camp Sherman, Oregon (population 380) with Cato's offices in Washington, DC. Of course, I tend to move about every eight or nine years, so by the time the rail line was finished the only potential regular customer would be gone. But just think of the jobs that would be created!

Twu lives in California, and his map has six lines radiating from Los Angeles and two from San Francisco. Twu is probably thinking either of where he would like to go by high-speed train or that everyone else would like to come to California by high-speed train. (He would also like us to "imagine no cars" in which case everyone would happily live in high-density, mixed-use developments. Like many planning types, he doesn't understand the economics behind the horror of dumbbell tenements.)

Economist Megan McArdle points out that Twu's New York-Los Angeles line makes little sense. Few people will want to spend 18 hours (McArdle's estimate) in a coach seat when planes can do the same trip in six at a far lower cost. Nor will many intermediate segments, such as Chicago to Omaha or Denver to Las Vegas, attract large numbers of passengers. Thus, the trains will be fairly empty for much of the route.

McArdle doesn't mention the even more absurd Los Angeles-Miami line on Twu's map. As this analysis shows, Los Angeles-New Orleans is Amtrak's least-used long-distance train, and Amtrak's attempt to extend this route to Miami failed (partly due to Hurricane Katrina) after just a few years.

Twu's map also includes routes from Cheyenne to El Paso; Chicago to Montreal; and a line to McAllen, Texas and beyond into Mexico. Other than the politicians that represent these regions, how could anyone take these routes seriously?

Twu's map violates conventional wisdom among high-speed rail aficionados, which holds that trains are most competitive in 100- to 600-mile markets, not 2,000- to 3,000-miles. By "most competitive," of course, they mean "able to capture 5 or 6 percent of the market," which--when all modes are counted--is all that Amtrak has in the Boston-to-Washington corridor.

Rail supporters argue that Amtrak's Northeast Corridor barely qualifies as high-speed rail as its top speed is only 150 and its average speed only about half that (which also means that none of the lines funded by the Obama administration, outside of California, qualify either). But dreaming about faster trains does little to change the fact that the fastest trains in the world are only about half as fast as jet aircraft, nor the fact that more Americans live and work within a few minutes of airports than downtown train stations. Anyone who is really serious about speeding travel would find ways to speed airport security, which would cost a lot less and do a lot more to help a lot more travelers than building multi-billion-dollar rail lines.

Here's the real problem: America is a two-dimensional place, and we have a 4-million-mile network of highways and streets that allows anyone to get from practically anywhere to practically anywhere else in the contiguous 48 states. Rail lines are one dimensional, and what is worse they serve only selected points on that one-dimensional line. The number of people going from one point served by trains on a line to another point will be a small fraction of the total travelers in any given corridor.

Nor can trains compete with planes, which are not only faster but save money by requiring far less infrastructure. Airlines can respond to changes in travel patterns by altering air routes overnight, but building new rail lines is phenomenally expensive in time, money, and energy. (Rail advocates never mention the energy costs of constructing rail lines, which is typically scores if not hundreds of times greater than any potential annual energy savings from operations.) 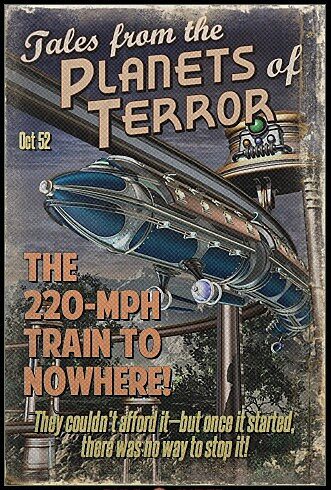 The other big problem with trains is political. Since high-speed passenger trains are not commercially viable, the only way to have them is for the government to build them. But even if one or two routes made sense for some environmental reason, once the government built those routes, the political demand to reach every other podunk jurisdiction represented by a powerful elected official would overwhelm all sense (see Japan's high-speed rail system for an example).

Riding luxury trains may be more elegant than driving, taking a bus, or squeezing into the economy seats of a typical aircraft. But people who want elegance should pay for first-class air fares--which, when all subsidies are counted, are still less expensive than most high-speed trains--not demand that taxpayers give them a cushy ride.