Did you sing "Happy Birthday"?

The nation just "celebrated" the fifth anniversary of the signing of the so-called American Recovery and Reinvestment Act, 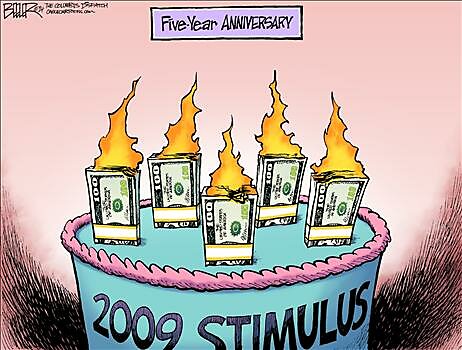 more commonly referred to as the “stimulus."

The Obama administration tells us that the law has been a big success, but I have a far more dour assessment of the spending binge. Here's some of what I wrote about the topic for The Federalist.

The White House wants us to think the legislation was a success, publishing a report that claims the stimulus “saved or created about 6 million job-years” and “raised the level of GDP by between 2 and 3 percent from late 2009 through mid-2011.”

Sounds impressive, right? Unfortunately, those numbers for jobs and growth are based on blackboard models that automatically assume rosy outcomes. Here's how I explain it in the article:

[H]ow, pray tell, did the White House know what jobs and growth would have been in a hypothetical world with no stimulus? The simple answer is that they pulled numbers out of thin air based on economic models using Keynesian theory. ... Keynesian economics is the perpetual motion machine of the left. They build models that assume government spending is good for the economy and they assume that there are zero costs when the government takes money from the private sector. That type of model then automatically generates predictions that bigger government will “stimulate’ growth and create jobs. The Keynesians are so confident in their approach that they’ll sometimes even admit that they don’t look at real world numbers. And that’s what the White House did in its estimate. The jobs number (or, to be more technical, the job-years number) is built into the model. It’s not a count of actual jobs.

In the real world, however, you can count jobs. As part of my Federalist article, I looked at the Minneapolis Federal Reserve Bank's interactive website and compared the current recovery to all business cycle expansions in the post-World War II era. I did that comparison for both jobs and economic growth. The figure below shows the numbers for the labor market. The current recovery is in red, and you can see that the nation is "stumbling through the second-worst recovery for job creation in the post-WWII era." 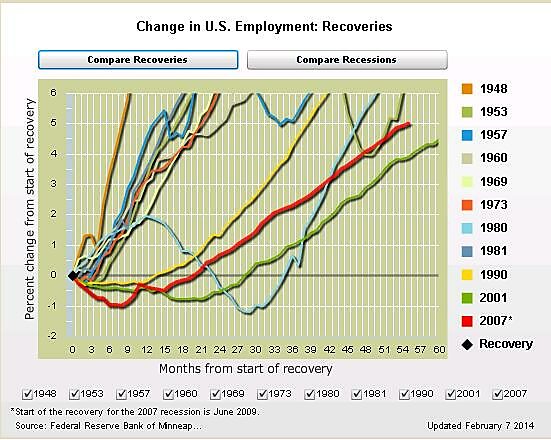 The next figure shows the Minneapolis Fed's numbers for economic growth. It doesn't seem possible, but GDP performance has been even worse than job performance. We are mired in stagnation. As I noted, "the current recovery (red line) is the weakest expansion since World War II." 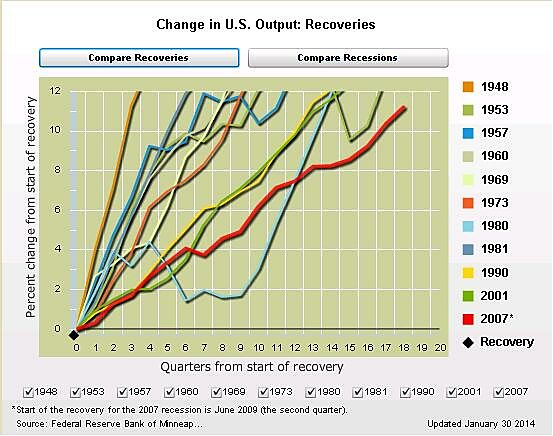 In other words, it's very difficult to argue—looking at the numbers—that the President's main economic initiative was a success.

So why did it flop?

I pontificate in the article, pointing out three specific problems with Keynesian economics. I start with the elementary observation that the theory is based on the notion that you can become richer by taking money out of one pocket and putting it in another pocket:

[T]here is an “opportunity cost” when government borrows money and spends it. Resources are diverted from the productive sector of the economy. This might not be a problem if government spent money wisely, but stimulus schemes tend to reward interest groups with the most political clout. So instead of outlays for physical and human capital, which at least theoretically might improve the economy’s productive capacity, the White House directed the bulk of the stimulus to redistribution programs and handouts to state governments.

I then make a critical observation about how you shouldn't try to solve one set of bad government policies with another layer of bad policy.


[T]he Keynesians don’t seem to appreciate that recessions generally are the result of bad government policies—such as inflation, housing subsidies, etc.—that lead to fundamental and unsustainable economic imbalances. Unfortunately, more government spending often is designed to prop up these imbalances, which can create a longer and more painful period of adjustment. 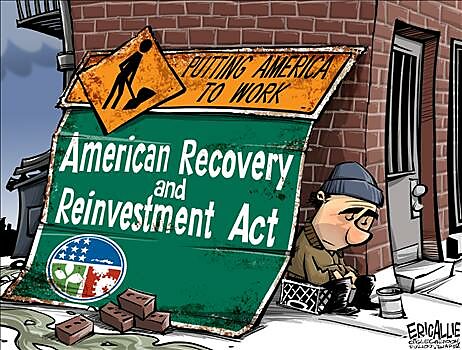 The clincher, at least for most people, is the simple fact that Keynesianism simply doesn't work:


But the biggest problem with Keynesianism is that the real-world evidence is so unfriendly. Consider, for instance, that the White House claimed that the unemployment would never climb above 8 percent if the stimulus was adopted. ... Keynesian economics has a long track record of failure. It didn’t work for Hoover and Roosevelt in the 1930s. It didn’t work for Nixon, Ford, and Carter in the 1970s. It didn’t work for Japan in the 1990s. And it hasn’t worked this century for either Bush or Obama.

And guess what? I'm going to make a very sad prediction that we'll get more Keynesian economics in the future, but it's easy to predict right now that these future spending binges will fail just like the previous stimulus schemes have flopped.

P.P.S.: If you'd rather laugh than hear my voice, my favorite cartoons on Keynsianism can be viewed here and here.