“Where Do We Have Tariffs?” the President Asked. On Clothing and Footwear, For a Start

“Where do we have tariffs?” President Trump asked yesterday. One obvious answer is on imported clothing and footwear, where tariffs are both substantial and hit low‐​income consumers hard.


The United States raised $33.1 billion in tariff revenue in 2017, but $14 billion of that came from tariffs on apparel and footwear alone. These items account for 4.6 percent of the value of U.S. imports, but 42 percent of duties paid. That means while the average effective tariff rate for U.S. imports overall is just over 1.4 percent, rates for apparel and footwear are 13.7 percent and 11.3 percent, respectively.[i]


My colleague Daniel Ikenson has previously examined the evolution of clothing and textile protectionism. He concludes that such high tariffs do not protect domestic apparel manufacturing. Data from the U.S. Trade Representative shows that 91 percent of manufactured apparel goods and 96.5 percent of footwear are imported.


Why then are such highly regressive tariffs imposed? The answer appears to be the lobbying efforts of the capital‐​intensive U.S. textile industry. Textiles are the major input for labor‐​intensive apparel production, which largely occurs overseas. To quote Ikenson directly:

The U.S. textile industry insists on preserving those tariffs as leverage to compel foreign apparel producers to purchase their inputs. Preferential access [to U.S. markets] is conditioned on use of U.S. textiles. The high rates of duty apply, generally, to all “normal trade relations” partners. But those duties are much lower or excused entirely for trade agreement partners, provided that the finished garment comprises of textiles made in countries that are signatories to the agreement.

U.S. consumers pay the price of this protectionism, and poorer consumers especially. In 2016, the average household in the bottom income quintile spent $860 on apparel and footwear, or 3.4 percent of overall spending—the highest proportion of any income quintile. The average single‐​parent household put 4.5 percent of total expenditure toward these goods. The poor spend a disproportionate amount on clothing and footwear, and family structures most likely to be recipients of means‐​tested welfare programs (single‐​parent households) spend most of all.


But this protectionism is not just regressive because of relative spending patterns. Edward Gresser’s work has shown how, often, luxury clothes and shoes face lower tariff rates than inexpensive products. 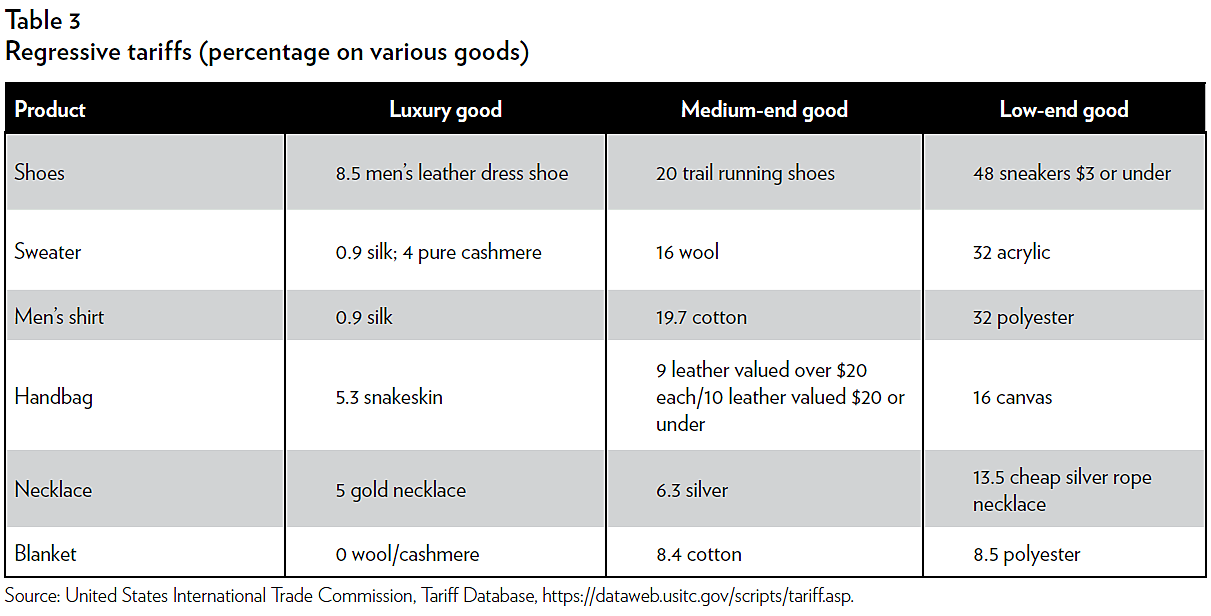 The true overall cost of all this to poorer families is difficult to calculate. To get an accurate estimate would require detailed information on the effect on domestic substitute goods’ prices, knowledge of products bought by poor families and their propensity to import in the absence of protectionism.


These figures likely underestimate the true burden, because they only represent the direct cost from current spending on imported goods. They assume tariffs do not raise domestically produced goods prices, though in reality the anti‐​competitive effect of the tariffs would be expected to raise prices here too. It also assumes the same effective tariff rates for apparel and footwear apply for the poorest households as for the whole population, but we have seen that products that the poor are more likely to buy tend to face higher tariff rates. Consumer welfare losses from tariffs, of course, are higher than the implied costs here, since tariffs make consumers less willing to buy imported products that they would otherwise prefer.


In short, next time the President asks where tariffs are applied, someone shout “apparel and footwear.” They are both large and regressive.