Jason Sorens, political scientist and founder of the Free State Project, has a series of posts at Pileus trying to estimate  the size of the “liberty constituency” in each state. Using statistical techniques well beyond my high-school algebra, he first calculated the support for Ron Paul's presidential campaign in each state if conditions were equal. It may not be terribly surprising that by those calculations Ron Paul's best states -- and therefore, putatively, the states with the largest "liberty constituency" -- were New Hampshire, Idaho, South Dakota, and Washington. In fifth place, presumably reflecting those dreaded "Beltway libertarians," was the District of Columbia.

Sorens points out, "Idaho, Utah, Wyoming, Nebraska, Oklahoma, and Alaska are the most conservative states, while Vermont, Rhode Island, Massachusetts, Hawaii, Connecticut, and New York are the most liberal states. The states with the most libertarians are Montana, Alaska, New Hampshire, and Idaho, with Nevada, Indiana, Georgia, Wyoming, Washington, Oregon, Utah, California, and Colorado following." The most liberal states don't seem to have many libertarians. Of the conservative states, Idaho and Alaska have a lot of libertarians, Oklahoma and Nebraska not so much. (I suspect that a more mainstream libertarian-leaning candidate, a small-government, free-trade, skeptical-of-foreign-intervention candidate like Nebraska's own Chuck Hagel, might have more appeal to the sober burghers of the Cornhusker State than the more provocative candidacies of Ron Paul and the Libertarian Party.)

Thanks to longtime libertarian Bill Westmiller, I can add some historical perspective to this material. In 1980 Libertarian Party presidential candidate Ed Clark got just over 1 percent of the national vote, which gives us more Libertarian voters to analyze than the recent results that Sorens was using. Those results show far more Libertarian voters per capita in Alaska, where the Libertarian Party had a real party organization and where Clark campaigned heavily, than anywhere else. After that came the rugged individualist states of the mountain West -- Montana, Wyoming, Oregon, Colorado, Arizona, Idaho, and Nevada. 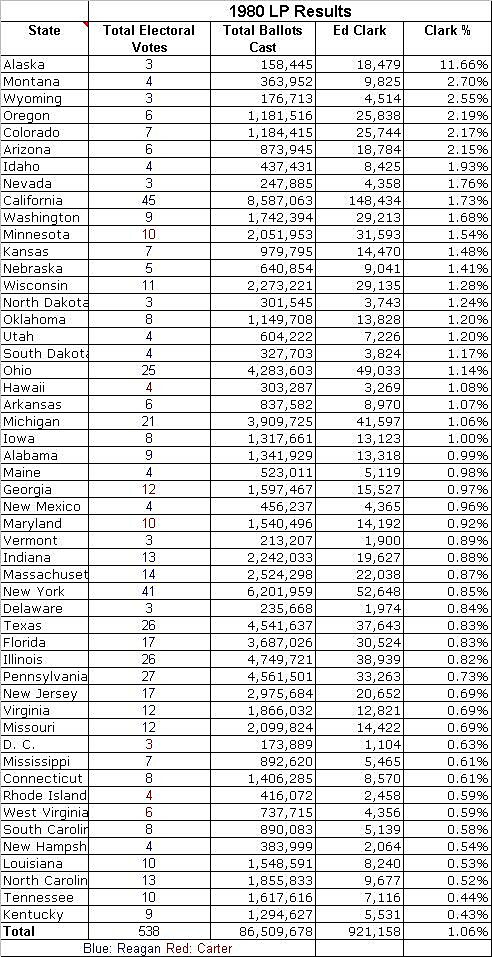 In 1980 you found the fewest Libertarian voters in the South, notably in Kentucky, where I grew up, and Tennessee, where I went to college. The South doesn't seem to have improved much in 30 years. Georgia moved up from middle of the pack to one of the larger concentrations of libertarian voters; Sorens attributes that to the influence of bigfoot Atlanta radio host Neal Boortz. And of course the biggest point to remember about this chart -- aside from its being a record of votes cast 30 years ago -- is that the number of people who will vote for a third-party candidate is far less than the number who would vote for a major-party candidate with the same ideas.

Here's one question: I think of New Hampshire as one of the most libertarian states, and Sorens's "Liberty Bloc" calculations seem to confirm that. But in 1980 Clark got only half his national percentage there. What has changed in New Hampshire?

Sorens will go on to discuss whether libertarians "actually influence the overall policy regime of a state," no doubt drawing on his paper with William Ruger, "Freedom in the 50 States: An Index of Personal and Economic Freedom." And of course on these topics I recommend my own studies with David Kirby, "The Libertarian Vote" and "The Libertarian Vote in the Age of Obama."