I'm still dealing with the statist echo chamber, having been hit with two additional attacks for the supposed sin of endorsing Reaganomics over Obamanomics (my responses to the other attacks can be found here and here). Some guy at the Atlantic Monthly named Steve Benen issued a critique focusing on the timing of the recession and recovery in Reagan's first term. He reproduces a Krugman chart (see below) and also adds his own commentary.

Reagan's first big tax cut was signed in August 1981. Over the next year or so, unemployment went from just over 7% to just under 11%. In September 1982, Reagan raised taxes, and unemployment fell soon after. We're all aware, of course, of the correlation/causation dynamic, but as Krugman noted in January, "[U]nemployment, which had been stable until Reagan cut taxes, soared during the 15 months that followed the tax cut; it didn't start falling until Reagan backtracked and raised taxes."

This argument is absurd since the recession in the early 1980s was largely the inevitable result of the Federal Reserve's misguided monetary policy. And I would be stunned if this view wasn't shared by 90 percent-plus of economists. So it is rather silly to say the recession was caused by tax cuts and the recovery was triggered by tax increases.

But even if we magically assume monetary policy was perfect, Benen's argument is wrong. I don't want to repeat myself, so I'll just call attention to my previous blog post which explained that it is critically important to look at when tax cuts (and increases) are implemented, not when they are enacted. The data is hardly exact, because I haven't seen good research on the annual impact of bracket creep, but there was not much net tax relief during Reagan's first couple of years because the tax cuts were phased in over several years and other taxes were going up. So the recession actually began when taxes were flat (or perhaps even rising) and the recovery began when the economy was receiving a net tax cut. That being said, I'm not arguing that the Reagan tax cuts ended the recession. They probably helped, to be sure, but we should do good tax policy to improve long-run growth, not because of some misguided effort to fine-tune short-run growth. 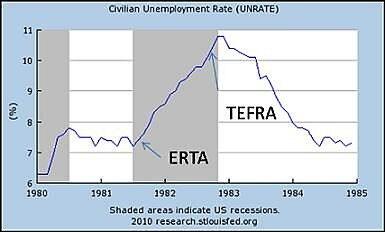 The second attack comes from some blog called Econospeak, where my newest fan wrote:

I’m scratching my head here as I thought the standard pseudo-supply-side line was that the deficit exploded in the 1980’s because government spending exploded. OK, the truth is that the ratio of Federal spending to GDP neither increased nor decreased during this period. Real tax revenues per capita fell which is why the deficit rose but this notion that the burden of government fell is not factually based.

Those are some interesting points, and I might respond to them if I wanted to open a new conversation, but they're not germane to what I said. In my original post (the one he was attacking), I commented on the "burden of government" rather than the "burden of government spending." I'm a fiscal policy economist, so I'm tempted to claim that the sun rises and sets based on what's happening to taxes and spending, but such factors are just two of the many policies that influence economic performance. And with regard to my assertion that Reagan reduced the "burden of government," I'll defer to the rankings put together for the Economic Freedom of the World Index. The score for the United States improved from 8.03 to 8.38 between 1980 and 1990 (my guess is that it peaked in 1988, but they only have data for every five years). The folks on the left may be unhappy about it, but it is completely accurate to say Reagan reduced the burden of government. And while we don't yet have data for the Obama years, there's a 99 percent likelihood that America's score will decline. 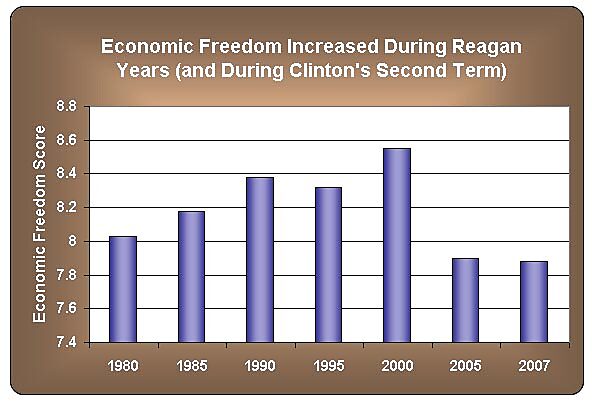 This is not a partisan argument, by the way. The Economic Freedom of the World chart shows that America's score improved during the Clinton years, particularly his second term. And the data also shows that the U.S. score dropped during the Bush years. This is why I wrote a column back in 2007 advocating Clintonomics over Bushonomics. Partisan affiliation is not what matters. If we want more prosperity, the key is shrinking the burden of government.

Last but not least, I try to make these arguments to the folks watching MSNBC.