When Government Tells Untruths — For Our Own Good 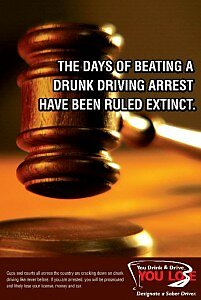 "THE DAYS OF BEATING A DRUNK DRIVING ARREST HAVE BEEN RULED EXTINCT....

"If you are arrested, you will be prosecuted and likely lose your license, money and car."

As Raised on Hoecakes says:

Cool, huh? Only one problem: it isn’t true. Someone missed the memo telling judges to make arrests for DUI a resulting conviction 100% of the time." In Florida, to take one state he says is representative, there were 55,722 DUI tickets and 33,625 DUI convictions in 2011, and although not all cases are closed the same year they begin, the estimated conviction rate still must run closer to 60 percent than 100 percent. Nor is it true that all arrests result in prosecution: prosecutors decline to press some charges where they deem the evidence in hand to be weak, and almost everyone, with the possible exception of certain hosts of TV crime shows, agrees that's as it should be.

I suppose the generous way to interpret untruths like the ones on this poster would be as a fancier way to say, "Don't drive drunk, you'll get caught." But they also send a rather more disturbing message: "If arrested on DUI and you believe the government's case against you is weak, better not fight, just take a plea. Because it doesn't matter how strong your defense is, a judge won't save you.

Presumably that second message is unintentional.

[Cross-posted from Overlawyered. Earlier on government as false advertiser here.]