Readers of this blog know that Cato filed a brief in Hollingsworth v. Perry arguing that state prohibitions on same‐​sex marriage violate the Equal Protection Clause of the Fourteenth Amendment. But since when have they done that? More broadly, to quote a colloquy between Justice Scalia and Ted Olson in the Perry argument:

JUSTICE SCALIA: I’m curious, when -­ when did — when did it become unconstitutional to exclude homosexual couples from marriage? 1791? 1868, when the Fourteenth Amendment was adopted? Sometimes — some time after Baker, where we said it didn’t even raise a substantial Federal question? When — when — when did the law become this?


JUSTICE SCALIA: It’s an easy question, I think, for that one. At — at the time that the Equal Protection Clause was adopted. That’s absolutely true. But don’t give me a question to my question. When do you think it became unconstitutional? Has it always been unconstitutional? …


MR. OLSON: It was constitutional when we -­ as a culture determined that sexual orientation is a characteristic of individuals that they cannot control, and that that -­


MR. OLSON: There’s no specific date in time. This is an evolutionary cycle.

With due respect to Ted Olson, a former solicitor general who’s argued more cases than I’ve watched, I think he missed the mark on this one. How do rights spontaneously emerge? To pick up on one of the above examples, was segregation constitutional in 1900 but then somehow not 50 years later? No, Plessy v. Ferguson was incorrectly decided in 1896 and Brown v. Board of Education overruled it rather than merely asserting that there was an “evolutionary cycle.” Justice Scalia himself recognized that state racial discrimination of all kinds became unconsitutional when the Fourteenth Amendment was ratified, in 1868 — and not at some time in future when each particular instance of it was found to violate that provision. 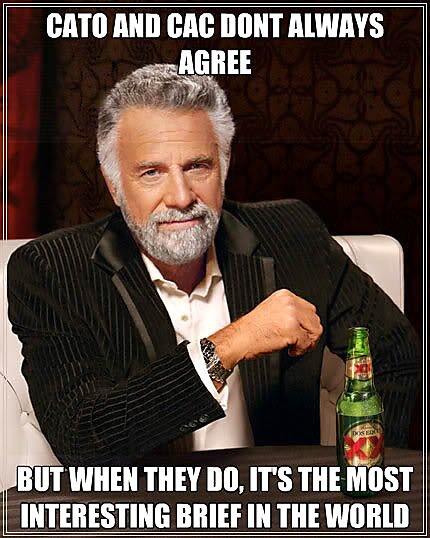 And so, either it was unconstitutional to exclude same‐​sex couples from marriage in 1868 or it’s still constitutional to do so. Josh Blackman and I wrote about doing this “originalism at the right time” in our exegesis of the Privileges or Immunities Clause in the context of the right to keep and bear arms, Keeping Pandora’s Box Sealed. (Josh later extended that analysis in a short piece on gender equality and sex discrimination.)


Which isn’t to say that what the challengers have to prove here that the drafters or ratifiers of the Fourteenth Amendment had gay marriage in mind. But it does mean that you have to look at what “equal protection of the laws” in 1868 and apply that understanding accordingly. As Elizabeth Wydra, my co‐​counsel on our Perry brief, wrote on the Constitutional Accountability Center’s blog:

While race was obviously at the forefront of the minds of the Amendment’s drafters — after all, they had just secured an amendment banning slavery in the wake of a brutal civil war–they specifically chose language that would protect against unequal treatment based on more than just racial discrimination, and in fact affirmatively rejected narrower proposals that would prohibit only racial discrimination.


Even so, had Olson given Justice Scalia the answer I have suggested, Scalia surely would have retorted that there was no way the American people were thinking of marriage equality for gay and lesbian couples when they ratified the Amendment. That’s not the point. No originalist — not even Justice Scalia — believes that the plain words of the Constitution apply only in the ways the framers expected. The ruling Justice Scalia announced from the bench just before the start of arguments this morning is a perfect example: just because there weren’t drug‐​sniffing police dogs in 1791, doesn’t mean their use can’t violate the Fourth Amendment’s protection against unreasonable searches and seizures, as the Court held today in Florida v. Jardines.


The Constitution guarantees equal protection of the laws to “any person.” In looking to what rights were understood to be protected equally, the framers of the Fourteenth Amendment understood state‐​sanctioned marriage as a personal, individual right that must be made available on an equal basis to all persons. Accordingly, by writing into the Constitution a requirement of equality under the law and equality of basic rights for all persons, which included the right to marry, the Amendment’s framers ensured that discriminatory state laws would not stand in the way of Americans exercising their right to marry the person of their own choosing. Laws that discriminate and deny to members of certain groups, including gays and lesbians, the right to marry the person of one’s choice thus contravene the original meaning of the Fourteenth Amendment.

See also Josh Blackman and Orin Kerr. And for more on the original meaning of the Equal Protection Clause, see my op‐​ed with CAC’s president, Doug Kendall.