What You Won’t Find in the New National Climate Assessment

Under the U.S. Global Change Research Act of 1990, the federal government has been charged with producing large National Climate Assessments (NCA), and today the most recent iteration has arrived. It is typical of these sorts of documents--much about how the future of mankind is doomed to suffer through increasingly erratic weather and other tribulations. It’s also missing a few tidbits of information that convincingly argue that everything in it with regard to upcoming 21st century climate needs to be taken with a mountain of salt.

The projections in the NCA are all based upon climate models. If there is something big that is systematically wrong with them, then the projections aren’t worth making or believing. 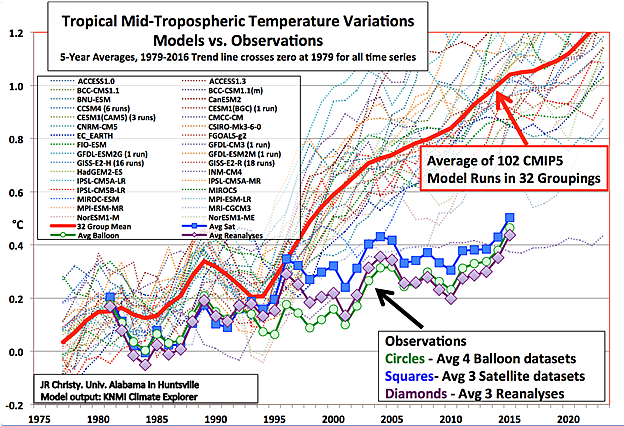 The chart shows predicted and observed tropical (20⁰N-20⁰S) temperatures in the middle of the earth’s active weather zone—technically the mid-troposphere, roughly from 5,000ft to 30,000ft elevation. The predicted values are from the 102 climate model realizations from 32 different base model groups. These models are from the most recent science compendium of the UN’s Intergovernmental Panel on Climate Change (IPCC), and is the most comprehensive set available. Data for the chart were recently published in the Bulleting of the American Meteorological Society.

The squares are the average of the three extant datasets for satellite-sensed global temperatures in the same zone, the circles are the average of the four weather balloon records, and the diamonds are the fancy new “reanalysis” data, which uses a physical model to compensate for the fact that not all three-dimensional “soundings” of the atmosphere are from the same stations every day.

The difference between the predicted changes and observed is striking, with only one model, the Russian INCM4, appearing realistic. In its latest iteration, its climate sensitivity (the net warming calculated for a doubling of the atmosphere’s carbon dioxide concentration) is 1.4⁰C (2.5⁰F) compared to the average of 3.2⁰C (5.8⁰F) in the family of models used in the National Climate Assessment. In fact, the temperature trajectory the earth is on, along with an expected large-scale shift from coal to gas for electrical generation (already underway in the U.S. and Canada) will keep total human-caused warming to less than 2.0⁰C (3.6⁰F) between 1950 and 2100, which is the goal of the Paris Climate Agreement.1

That’s a far cry from the extremism of the National Assessment.

The second bit of missing information is sufficient to invalidate most of the Assessment’s predictions. It’s a bit more complicated than the first one. 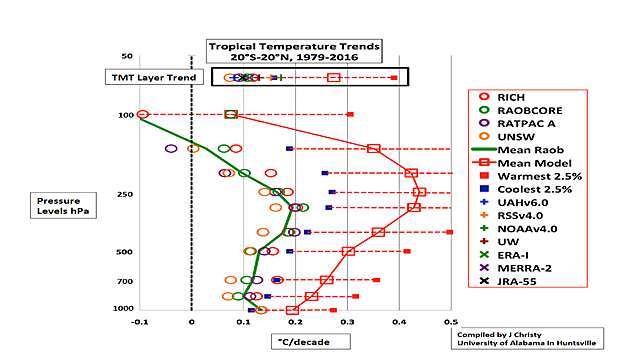 The vertical axis is height (as measured by barometric pressure) and the horizontal axis is temperature change, in degrees C per decade. The solid green line is the observed average of our four sets of vertical sounding data from balloons. You can see that the observed warming rate at the surface (given as the “1000 hPa” on the left axis) is a bit above 0.1⁰C/decade, while the predicted value (1979-2016) is smidge below 0.2⁰C. In other words, in this region, which is extremely important to global climate, almost twice as much warming is being predicted compared to what is measured. This is figure S-2 in the recent Bulleting of the American Meteorological Society report on the climate of 2016.

But the situation gets truly horrific as one goes up in the atmosphere. The models predict that there should have been a huge “hot spot” over the entire tropics, which is a bit less than 40% of the globe’s surface. Halfway up through the atmosphere (by pressure), or at 500 hPa, the predicted warming is also twice what is being observed, and further up, the prediction is for seven times more warming than is being observed.

The importance of this is paramount. The vertical distribution of temperature in the tropics is central to the formation of precipitation. When the difference between the surface and the upper layers is large, surface air is more buoyant, billowing upwards as the cumulonimbus cloud of a heavy thunderstorm. When the difference is less, storm activity is suppressed. As shown on the chart, the difference is supposed to be becoming less and less, which would result in a general tendency for tropical drying. In reality, the opposite is occurring over much of the tropics, which should result in an increase in precipitation, rather than the decrease forecast by the climate models.

Missing the tropical hot spot provokes an additional cascade of errors. A vast amount of the moisture that forms precipitation here originates in the tropics. Getting that wrong trashes the precipitation forecast, with additional downstream consequences, this time for temperature.

When the sun shines over a wet surface, the vast majority of its incoming energy is shunted towards the evaporation of water rather than direct heating of the surface. This is why in the hottest month in Manaus, Brazil, in the middle of the tropical rainforest and only three degrees from the equator, high temperatures average only 91⁰F (not appreciably different than humid Washington, DC’s 88⁰F). To appreciate the effect of water on surface heating of land areas, high temperatures in July in bone-dry Death Valley average 117⁰F.

Getting the surface temperature wrong will have additional consequences for vegetation and agriculture. In general, a wetter U.S. is one of bumper crops and good water supplies out west from winter snows, hardly the picture painted in the National Assessment.

So this one, like its predecessors, suffers from a serious and obvious flaws that are simply ignored. As first documented in our 2004 book Meltdown, the first Assessment used models that were worse than a table of random numbers when applied to 20th century coterminous U.S. temperatures, and the chief scientist for the report knew it and went ahead anyway! The last (third) one engendered book-length filed public comments, all with our eye for climate humor, and the second one was so bad that we published an entire palimpsest, or mirror-image document.

Ignoring the massive and critical errors noted above—along with a whole other emerging story on the arbitrary nature of the climate models—is certainly going to lead for some to call for a re-examiation of EPA’s “Endangerment Finding” from carbon dioxide, which is the basis for regulation of greenhouse gases.