What Ron Paul Talks About

The New York Times has an interesting graphic, under the heading "Choice Words," that shows how differently Ron Paul talks about the role of government from all the other candidates. There's a complete version here, but I've excerpted a section. The Times notes that the graphic depicts "selected words used by President Obama in his State of the Union addresses, and by Republican presidential candidates in their debates, television interviews and major speeches since May." 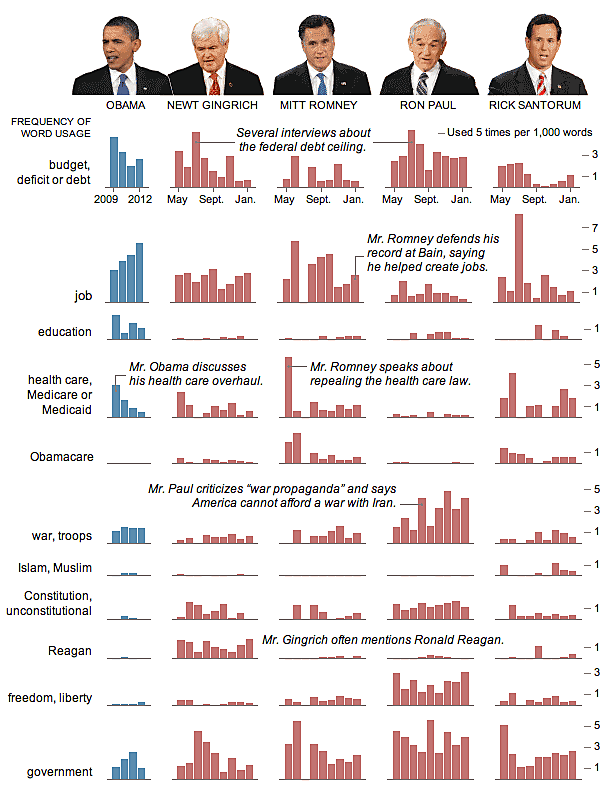 So what do we see? Ron Paul talks about deficits and debt more than any other candidate. (President Obama seems to have talked about the deficit most in 2009, when it was all Bush's fault.) He's virtually the only candidate who talks about war and troops---no doubt in phrases like "bring the troops home" and "troops in 147 countries." All those folks who voted for Barack Obama in 2008 to end the war may be wondering where the determined young antiwar senator went; now he doesn't even talk about America's wars.

What doesn't he talk about? He hardly mentions jobs, education, and health care. Why? Are those unimportant parts of life? No, but he correctly sees that they're outside the proper scope of government and that we shouldn't look to the president to provide them. If the government operates within the Constitution, thus protecting liberty, the people will do a better job than government in providing for human needs, including jobs, education, and health care.