What if Politicians Are the Biggest Medical Supply Chain Risk?

The onset of COVID-19 has amplified public concerns about the supposed fragility of global supply chains, and fueled proposals on the left and the right to boost supply chain “resiliency” through government policies (subsidies, tariffs, “Buy American” mandates, etc.) that are intended to encourage the domestic production of essential goods, especially pharmaceuticals and medical devices. Indeed, such “re‐​shoring” plans are one of the few issues on which both President Trump and Democratic challenger Joe Biden agree. A lengthy new McKinsey report on global supply chains, however, shows just how daunting (and unrealistic) this re‐​shoring task would be, and that the biggest risk to medical supply chains is not free markets, a global pandemic, or a natural disaster, but politicians themselves.

The McKinsey report surveys dozens of supply chain executives and 23 different industries to provide a treasure trove of interesting data and analysis on global supply chain risks. Among the industries examined are both pharmaceuticals and medical devices — two industries that supply chain nationalists in the United States have targeted for particular government attention due to COVID-19 and the alleged risks that these critical industries (and thus the American people) face from the next major shock. McKinsey finds, however, that both industries’ supply chains actually rank among the least exposed to an external shock, with medical devices ranking 23rd (dead last) and pharmaceuticals only a bit higher at 19th: 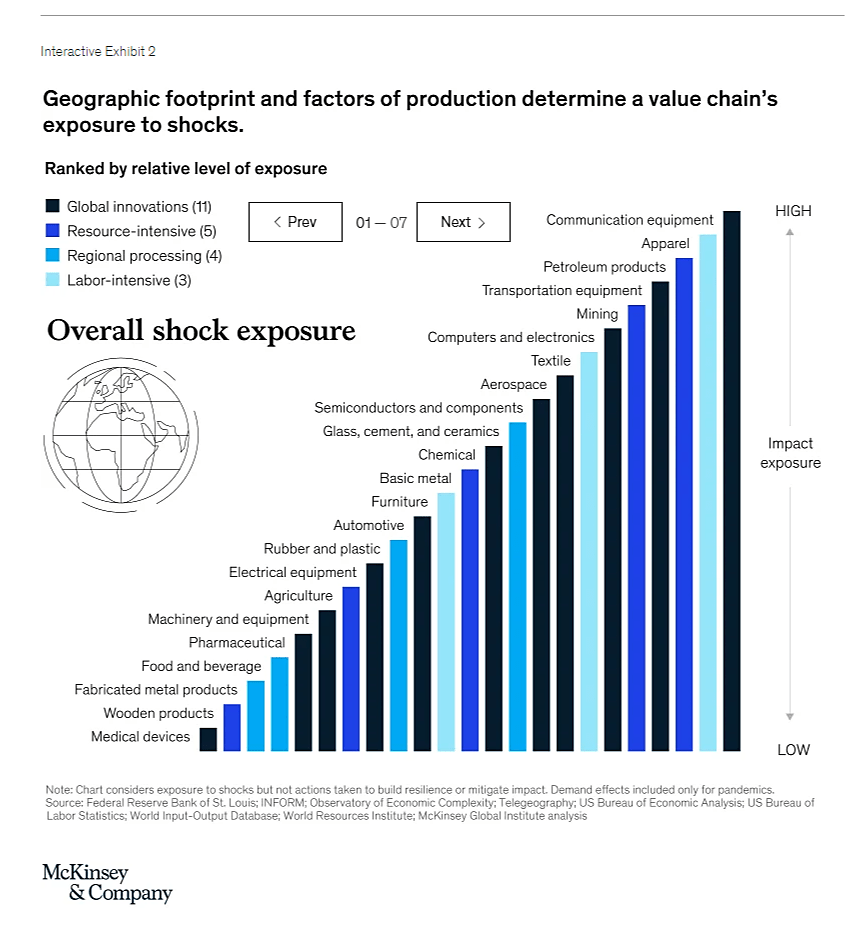 The risks facing these two supply chains are even lower when looking at just pandemics: 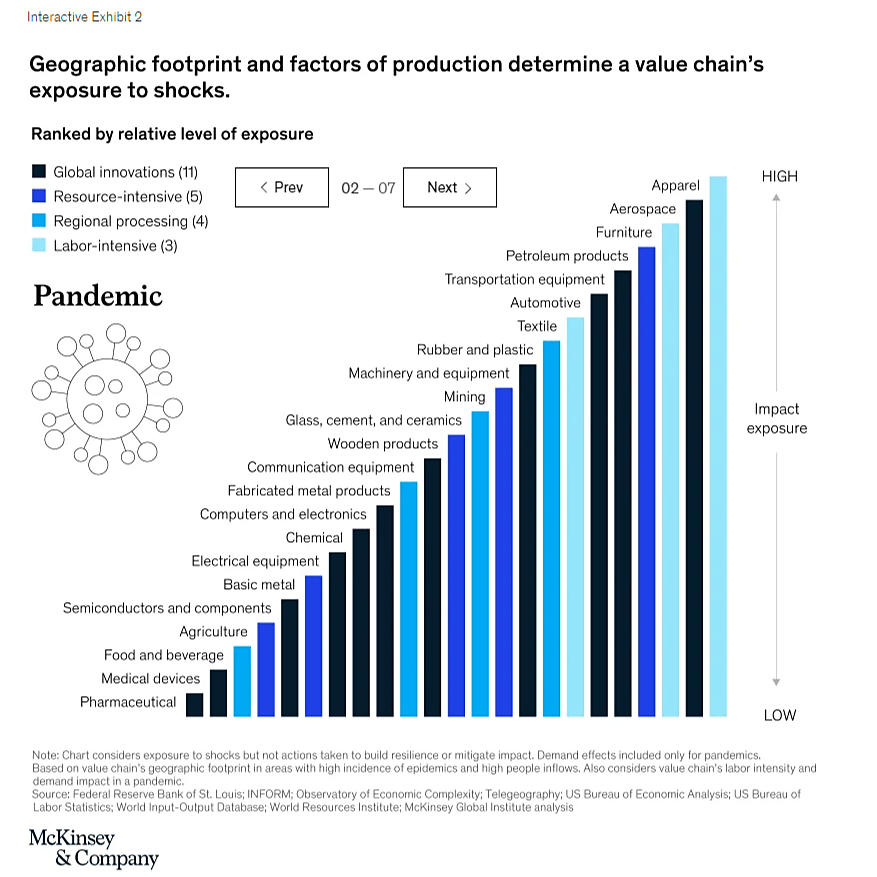 The McKinsey report also finds that these two industries also would suffer some of the smallest financial losses in the event of a major supply chain disruption. These data indicate that the current hysteria regarding “essential” medical supply chains is overblown, and that the risks facing these industries are far lower than what many U.S. politicians (and credulous media reports) would have you believe.

However, the McKinsey report does show that these industries are vulnerable to two types of man‐​made shock — cyberattacks (due to each industry’s high level of technology) and trade disputes: 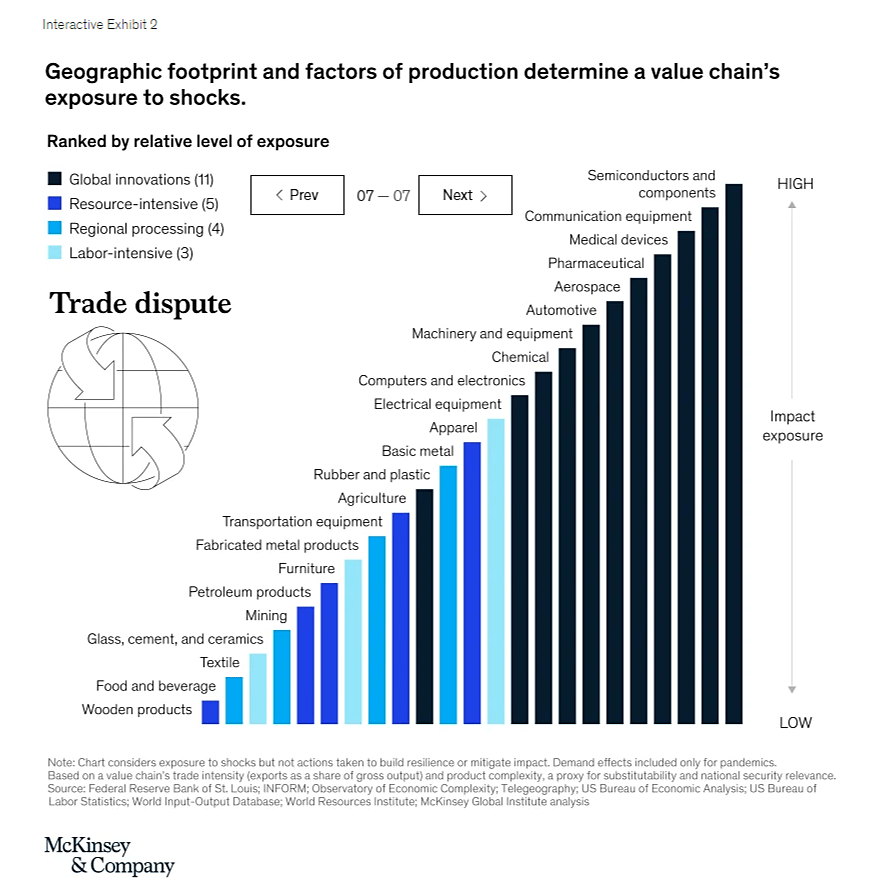 The report also elaborates on the factors driving these “trade dispute” risks:

Protectionism has taken root in some of the Western democracies that were once champions of free trade. Borders have gone up again in Europe after decades of integration, and the full implications of that are not yet clear. There is a real chance that tariffs and nontariff barriers will continue to rise, reversing decades of trade liberalization.…

In the future, the [pharmaceutical] industry may be subject to greater trade tensions and to regulatory and policy shifts if governments take action to establish domestic production of critical pharmaceutical supplies to safeguard public health.

In short, the biggest risk facing these essential medical goods sectors isn’t another pandemic or a natural disaster but political actions, and many U.S. politicians (especially President Tariff Man) are today proposing new subsidies, protectionism or other government policies to “fix” a problem of their own making. Indeed, McKinsey’s analysis shows that there are few actual “economic” factors that would push these industries’ to relocate their supply chains, and that in both cases the stronger forces would be “non‐​economic” (i.e., proposed and enacted government policies that deem these goods “essential” or target them “for national security or economic competitiveness considerations”).

That said, McKinsey does see discrete challenges facing the pharmaceutical sector due to the potential concentration of a few specific products in certain locations, particularly China or India. Even here, however, there appears to be little need for broad‐​based U.S. government action. First, the risk is extremely narrow due to industry’s overall diversification and currently high levels of U.S. production (even with respect to the “Active Pharmaceutical Ingredients” that have been a recent Trump Administration focus): 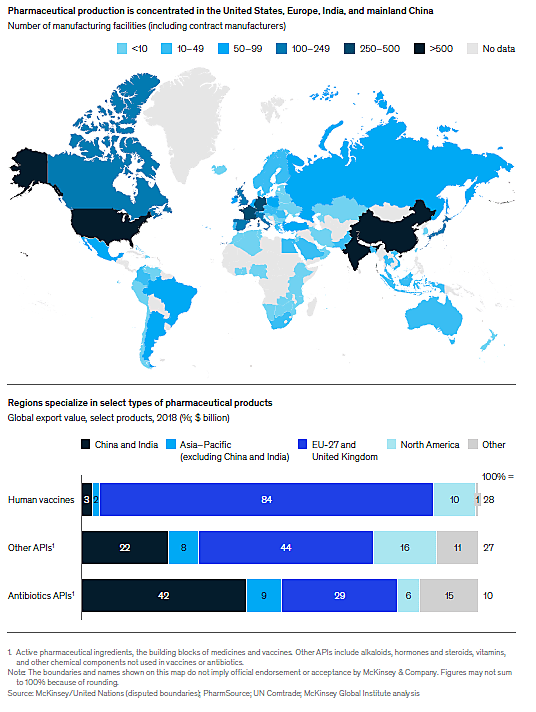 Indeed, as I’ll explain in a forthcoming paper, there is substantial economic research showing that this type of interdependence makes conflicts and disruptions less likely, not more.

Second, McKinsey notes that surveyed executives are already taking action to fix certain supply chain vulnerabilities that COVID-19 has exposed — particularly “sole sourcing” of certain pharmaceuticals — by diversifying their raw materials sources and suppliers, as well as increasing inventories of critical inputs. (By contrast, fewer were considering re‐​shoring their supply chains.) As such, big new U.S. government efforts to re‐​shore medical supply chains could end up “fixing” a small problem that doesn’t even exist any more.

In fact, these policies might even make things worse because mandated U.S. production of certain low‐​margin goods (e.g., “small‐​molecule” generic drugs and their inputs) could be economically infeasible:

Based on economics alone, there is little reason to believe that pharmaceutical production will shift unless it responds to the rise of new consumers in developing countries or to changes in tax policies or other incentives.… Production of small‐​molecule drugs would likely need to be digitized and automated to be viable in advanced economies; otherwise, the higher costs of doing business might lead to higher drug prices. Beyond requiring local production, governments can bolster national resilience through other strategies, such as the regionalization of supply chains, maintaining national stockpiles, or requiring pharmaceutical companies themselves to increase inventory.

Without major advances in manufacturing, new U.S government‐​backed initiatives targeting generic drugs might therefore require higher drug prices or permanent government support (in the form of subsidies or tariffs). When combined with the aforementioned trade risks, it seems the best “medical supply chain plan” the U.S. government could implement would be simply to refrain from messy and self‐​defeating economic nationalism and pursue more modest and practical strategies like the stockpiling or inventory requirements that McKinsey mentions above. Such an approach would be preferable from both an economic and political perspective — a lesson you’d hope both Trump and Biden would have learned from the recent Kodak mess or other recent, COVID‐​related industrial policy failures.

Alas, it appears that campaign season is no time for such lessons.