What Do You Do Once You Get the Fight Out of Europe?

The demilitarization of Europe — where large swaths of the general public and political class are averse to military force and the risks that go with it — has gone from a blessing in the 20th century to an impediment to achieving real security and lasting peace in the 21st. 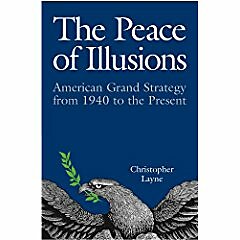 If Gates is really upset about this, he should blame his predecessors.  The United States has played an active role in stifling European defense, and is now reaping what it has sown.  As Alex Massie points out, American opposition to anything that would "duplicate, decouple from, or discriminate against" NATO meant that anything the Europeans decided to do would have to be kept within the context of NATO and the "transatlantic alliance."  For more on this phenomenon, see this paper by Cato research fellow Chris Layne, and pages 105-117 of Layne's excellent and very provocative book The Peace of Illusions.

As we know in the context of public goods and alliance behavior, the bigger countries are forced to carry disproportionately big loads.  By extension, when there is one super-giant country in the alliance, the only reason smaller countries would contribute would be if it were outside of the alliance context, which we have just seen the U.S. opposes.  Accordingly, the European abrogation of its own defense has only gotten more pronounced since the end of the cold war, because Uncle Sucker has insisted on picking up the tab.  Call your Congressman.

And we have recent evidence of U.S. opposition to increased European efforts: on a trip to Europe last month, Secretary of State Clinton was asked about the prospect of an independent European defense force.  Her answer, in full:

Well, again, this is a European matter. It certainly is a French and German matter. And I respect the decision making of allies like France and Germany, so it is really within those two countries’ sphere of authority.

I think the U.S. view is that we would not want to see anything supplant NATO. If it were able to supplement NATO, that would be different. But given the strains that already exist on NATO’s budget and military expenditures in our countries, we think it’s smarter to figure out how to use the resources we have more effectively, use the alliance that we’re members of in a more strategic way. But again, that is ultimately a decision of the French and the German people.

What America is asking is for European countries to refuse transfer payments from U.S. taxpayers who are currently paying for their defense.  Not likely to happen.

Bonus question of interest to theory hounds: What does American opposition to the formation of an autonomous European security and defense policy tell us about IR theory?  Given that the countries in question definitely qualify as democracies, wouldn't liberalism tell us that the United States should be encouraging, rather than stifling, an autonomous European defense?