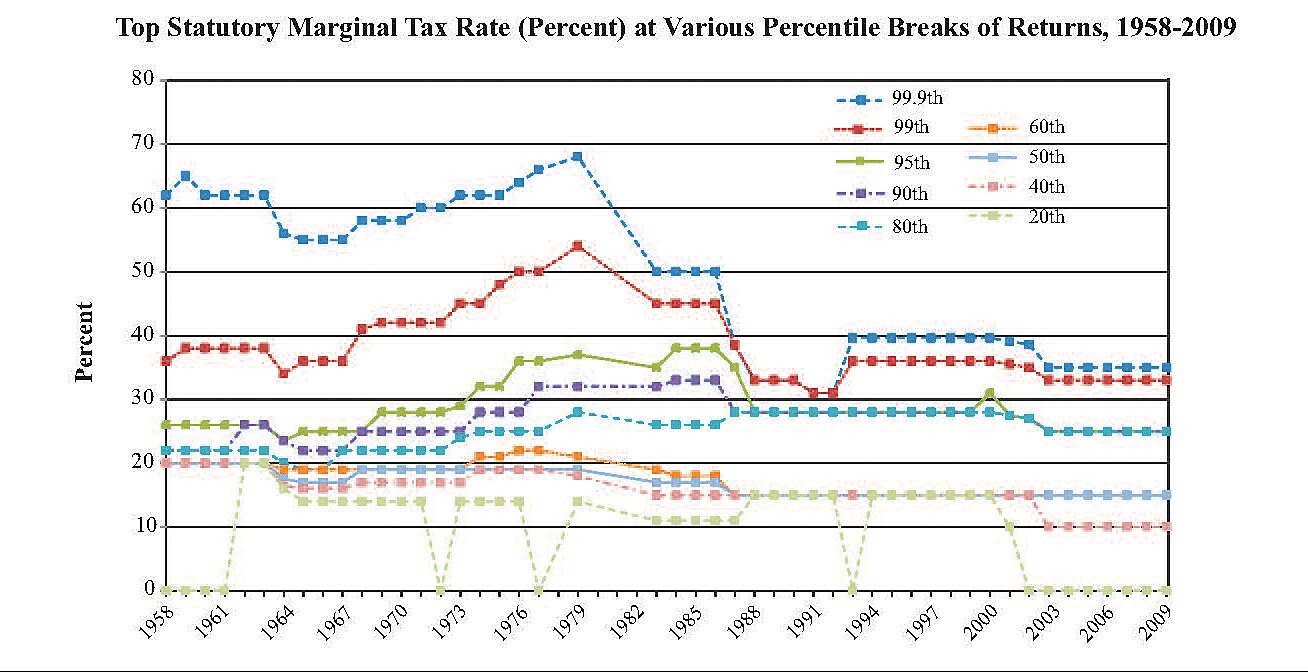 A stubborn myth of the pro-tax left (exemplified by Bernie Sanders) is that the Reagan tax cuts merely benefitted the rich (aka Top 1%), so it would be both harmless and fair to roll back the top tax rates to 70% or 91%.

Nothing could be further from the truth. Between the cyclical peaks of 1979 and 2007, average individual income tax rates fell most dramatically for the bottom 80%  of taxpayers, with the bottom 40 percent receiving more in refundable tax credits than paid in taxes.  By 2008 (with the 2003 tax cuts in place), the OECD found the U.S. had the most progressive tax system among OECD countries while taxes in Sweden and France were among the least progressive.

What is commonly forgotten is that before two across-the-board tax rate reductions of 30% in 1964 and 23% in 1983, families with very modest incomes faced astonishingly high marginal tax rates on every increase in income from extra work or saving (there were no tax-favored saving plans for retirement or college).

The graph, from the Brookings-Urban Tax Policy Center, shows how inflation pushed more and more families into higher and higher tax brackets from 1973 to 1981, when inflation averaged 7.6% as measured by the PCE deflator.   Thanks to runaway inflation and escalating bracket creep, from 1973 to 1981 marginal tax rates were rising for everyone at or above the middle income (the 50th percentile shown in light blue).

Despite dramatically lower inflation after 1981, bracket creep continued to impose small but sneaky tax hikes on middle-income taxpayers until 1985 when tax bracket income thresholds were finally indexed. If tax rate are flat, or nearly so, that whole game of pushing people into higher tax brackets is over. That happened to some extent from 1988 to 1990, when the 1986 Tax Reform briefly cut the top tax rate to 28% through 1990.  The worse that could then happen from a raise, promotion or second earner would be to shove you into a 28% tax bracket, which we now consider "middle class." From 1988 to 1990 the nearly-flat individual income tax brought in 7.9% of GDP (despite overtaxing capital gains) with a top tax rate of 28%.  Ironically, revenues under that 28% top tax were greater than the 7.6% average of 1991-95, despite or because of the Bush and Clinton “tax increases.”

Since 1988, despite vigorous efforts of the pro-tax establishment (e.g., Treasury, CBO and their graduates at the Tax Policy Center), marginal tax rates at all income levels remained much lower than they were from 1932 to 1981. Thank Presidents Kennedy and Reagan for that, but also Senator Bill Bradley (D-NJ) and especially Congressmen Jack Kemp (R-NY).  But thanks are also due to Congressmen Bill Steiger (R-WI) and Bill Thomas (R-CA) for lower tax rates on capital gains and dividends. Despite all this widespread relief from onerous and punishing taxation, Bernie Sanders seems oddly nostalgic about President Eisenhower’s 19 tax brackets above 35% while Secretary Clinton dreams of resuscitating a disastrous capital gains tax scheme FDR was forced to abandon in 1938.