To receive this segment by email, subscribe to the Cato Weekly Dispatch. 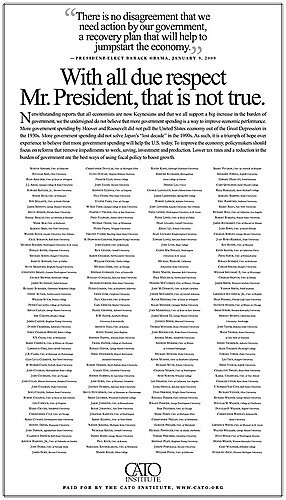 In reaction to statements from Obama administration officials who say “all economists agree” that the only way to fight the economic recession is to go on a massive government spending spree, the Cato Institute took out a full page ad in the nation’s largest newspapers that showed that those words were not true. Signed by more than 200 economists, including Nobel laureates and other highly respected scholars, the statement was published this week in The New York Times, The Washington Post and many other publications.

On the day the ad ran in The New York Times, Cato executive vice president David Boaz added more names to the list of economists who are skeptical of the spending bill.

Commenting on the principles behind the stimulus, Cato adjunct scholar Lawrence H. White and fellow economist David C. Rose discuss why we can’t spend our way out of this mess:

You can't solve an excessive spending problem by spending more. We are making the crisis worse.

In The Wall Street Journal, Cato senior fellow Alan Reynolds examines the numbers and discovers that each government job created  will cost taxpayers a staggering $646,214 per hire.

The stimulus package now moving through Congress will spend nearly $1 trillion that the government does not have. With the nation already $1.2 trillion in the hole, Cato director of Tax Policy Studies Chris Edwards discusses the sheer illogic behind pushing for stimulus at a time like this:

If I get up in the morning and drink five cups of coffee and that doesn’t stimulate me, I don’t go and drink another five. I’d recognize my addiction problem and start reforming my bad habits. Federal policymakers should do the same.

For more on the stimulus plan, read Edwards’s Tax and Budget Bulletin, “The Troubling Return of Keynes,” (PDF) co-authored by Ike Brannon, former senior adviser to the U.S. Treasury.

During the House vote on the stimulus bill, just 11 Democrats voted against it, leaving Boaz to ask, “What Happened to the Blue Dog Democrats?”

Cato legal policy analyst David H. Rittgers explains why he approves of Obama’s choice to shut down the prison at Guantanamo Bay and offers advice on how to proceed with the plan:

The Founders wrote the Bill of Rights after a violent insurgency brought on by government oppression, and the principles contained therein are no weaker while countering today's terrorists. Using national security courts to try the detainees in Guantanamo opens the door to closed and classified trials of domestic terror suspects. This degradation of essential liberties is unwise and avoids the social function of trials.

Listen to a Cato Daily Podcast interview with Rittgers to learn more about the future of the Gitmo detainees.

In the forthcoming Cato Handbook for Policymakers, Timothy Lynch, director of Cato’s Project on Criminal Justice, lays out a plan for the future of our government’s strategy for dealing with terrorism. (PDF)

In a Cato Policy Analysis, author Indur Goklany offers his commentary on how government should handle climate change.

Cato senior fellow in environmental studies Patrick J. Michaels offers his analysis on climate change, and how the international community should react.

Appearing on Fox News, Michaels, who is a former Virginia state climatologist, asserts that when it comes to climate change, there is no immediate emergency. For more, don’t miss Michaels’s new book, Climate of Extremes: Global Warming Science They Don’t Want You to Know, co-authored with Robert C. Balling Jr.