The Chairmen of President Obama’s Fiscal Commission have a new draft proposal that is filled, according to Reuters, with “sharp spending and benefit cuts.”


That’s music to my ears, so I quickly flipped to the back of the report in hopes of finding hard numbers showing that the federal government will be smaller in future years.


Much to my chagrin, it turns out that the federal government will increase by about $1.5 trillion between 2010 and 2020 according to the Commission’s numbers. Here’s a chart based on the data from page 57. 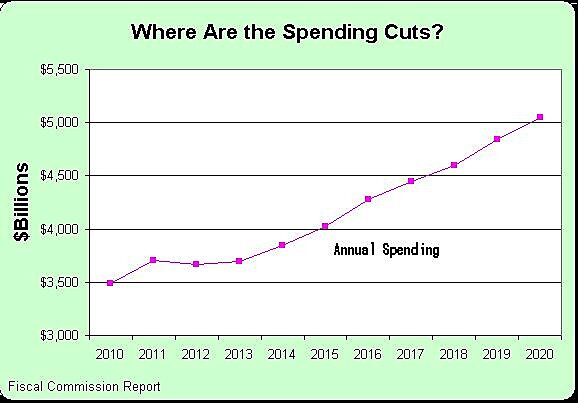 As I explain in the video below, this disconnect between supposed spending cuts and actual spending increases is the result of politicians creating a system where a spending increase can be called a “spending cut” if outlays don’t climb as fast as previously planned. This “baseline” or “current services” budgeting is a great gimmick for the politicians since they can simultaneously give more money to special interest groups while also telling voters that they are cutting the budget.

This does not mean that the folks at the Fiscal Commission are being deliberately dishonest. This process has been in use for decades and many budget wonks routinely rely on this common practice without giving any thought to whether it misleads voters.


And there are good reasons to collect “current services” data. Those numbers tell lawmakers how much spending has to increase if they, for instance, leave entitlement programs on autopilot (i.e., more senior citizens automatically leading to more Social Security spending).


Nonetheless, the debate about federal budget policy should be honest. If the Fiscal Commission thinks spending should increase at about twice the rate of inflation, and they want higher taxes to finance that spending growth, they should openly argue for that position. And if the hard left wants spending to increase three times faster than inflation, as it has during the era of Bush‐​Obama profligacy, they should openly make the case for why America should be more like France.