News stories are portraying the Republican tax bills as favoring the rich, even though the opposite is true. The GOP cuts would make the tax code more progressive, and the largest percentage cuts would go to middle-income households.

Rather than Trump and Republicans “shifting away” from middle-class cuts toward cuts for businesses and the wealthy as the Post claims, it is the opposite. Current House and Senate tax bills have sadly shifted away from pro-growth reforms toward redistribution from higher earners to lower earners.

Rather than a “windfall for the wealthy” as the Post claims, the GOP bills would provide larger percentage cuts for middle earners than higher earners (see here and here). The GOP may abandon cutting the top individual tax rate at all. Much of the cuts for high earners are allocated corporate tax cuts, but economists disagree about who those cuts would actually benefit.

Furthermore, the GOP tax bills would increase spending subsidies (refundable credits) for people at the bottom who do not pay any individual income taxes. Look at this TPC analysis of the Senate bill. It shows the bottom two quintiles receiving tax “cuts” in 2019 and 2025, yet those groups do not currently pay any income taxes on net.

The Post complains, “the legislation would lower taxes for many in the middle class, but mostly temporarily.” That is true, but virtually all the individual provisions in the Senate bill are temporary, not just the ones for the middle class. The corporate tax rate cut would be permanent, but this JCT analysis shows that in 2027 much of the revenue loss from that cut would be offset by corporate tax increases. Not only that, the Tax Foundation found that the corporate rate cut would nearly pay for itself by 2027 as corporate investment expanded and tax avoidance fell.

The Post presents TPC data showing tax-cut shares for each income group but provides no context. The following chart shows the TPC data in context. First, note the enormous share of federal taxes paid by the top quintile under current law. The chart includes all federal taxes—income, payroll, estate, and excise for 2019.

Now observe that the top quintile would receive a smaller share of the Senate tax cut than their tax share under current law. For the three middle quintiles, it is the opposite.

Trump and the Republicans did take a “U-turn.” They started down the pro-growth highway but veered off course into the redistributionist side roads. The conference committee would put the tax reform engine in reverse if it bumps up the corporate tax rate from 20 percent and makes other anti-growth changes. 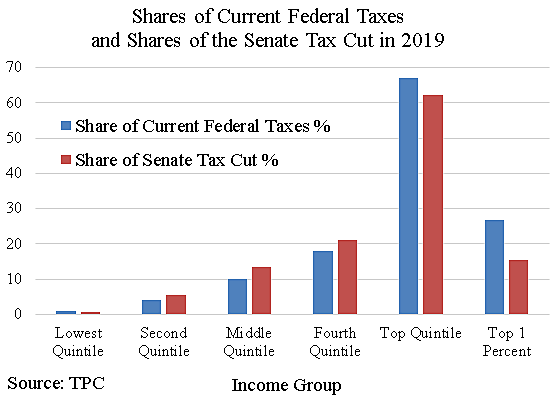 Data behind the chart is here.