The distribution effects of the Senate tax bill are examined in a Washington Post story. Reporter Heather Long looks at the bill’s Obamacare mandate repeal, based on a new Congressional Budget Office (CBO) study.


A table in the study appears to show, “The Senate Republican tax plan gives substantial tax cuts and benefits to Americans earning more than $100,000 a year, while the nation’s poorest would be worse off.”


But as Long notes,

The main reason the poor get hit so hard in the Senate GOP bill is because the poor would receive less government aid for health care….The CBO and JCT analyses make it seem as if a family is actually getting money taken away from them, but in reality, most of these families making under $30,000 don’t pay any income tax. The credits and subsidies they received to help them buy health insurance were typically sent directly from the government to the insurance company. So these families are unlikely to see any changes to their tax bills.

Along with the CBO table, Long presents a Joint Committee on Taxation (JCT) table sent to her by Senate GOP staff showing the tax bill’s effects without the Obamacare piece. This table indicates across‐​the‐​board tax cuts in the early years, but is in aggregate dollars with no context.


Given the (unfortunate) political importance of distribution tables, the JCT should post a fuller and more neutral set of such tables online. 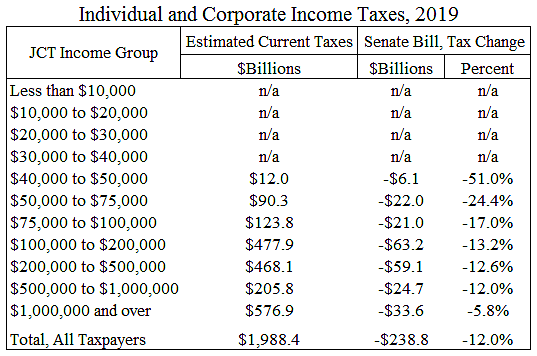