Billionaire Warren Buffett is campaigning with presidential candidate Hillary Clinton, and he is echoing her class warfare rhetoric. In Nebraska the other day:

As Mr. Buffett introduced Mrs. Clinton, he outlined statistics showing that the richest 400 Americans saw their incomes rise sevenfold between 1992 and 2012, the most recent year IRS data were available. During that period, their average tax rate dropped by about one‐​third, he said.

Buffett is referring to this data published by the IRS. The sevenfold increase Buffett refers to is not adjusted for inflation. The IRS provides a column with inflation‐​adjusted income, but Buffett decided not to use that data.


But the main problem with Buffett’s statement is that the one‐​third tax rate drop is explained by 2012’s lower capital gains and dividend tax rates. Buffett probably wants people to believe that nefarious loopholes caused the drop, but the real reason was a serious policy change widely supported by economists and tax experts.


Under the income tax, dividends and capital gains are generally taxed at both the corporate and individual levels. That double taxation creates serious distortions, such as inducing U.S. corporations to become excessively indebted. The capital gains and dividend tax rate cuts under George W. Bush (now rescinded) partly fixed the double taxation. 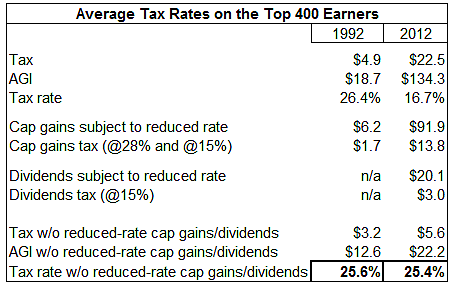 Without the reduced rates on capital gains and dividends, the average tax rate for the Top 400 was virtually unchanged—25.6 percent in 1992 and 25.4 percent in 2012.


There are other interesting things about the IRS data on the Top 400. Buffett, Clinton, Sanders, and the rest would have us believe that this is a permanent group of the wealthy aristocracy. Actually, there is huge turnover in the Top 400, as I discuss here. Most reach this top group for only a single year, often when they are selling their family businesses and realizing a capital gain. The IRS table shows that 68 percent of all income of the Top 400 is capital gains.


Finally, the IRS data show that the share of overall federal taxes paid by the Top 400—even with the reduced capital gains and dividend tax rates in 2012—rose from 1.04 percent in 1992 to 1.89 percent in 2012. Buffett is quoted saying of the Top 400, “the game has been stacked in their direction.” But if the Top 400 are paying a higher share, the game is clearly stacked against them.