For years, Warren Buffett has been claiming that his secretary pays a higher tax rate than he does. Recently, President Obama has taken that claim and run with it. I don’t know Mr. Buffett’s particular tax situation, but I do know that his claim as a general matter is bogus.

Let’s look at some numbers. The first chart shows IRS data for income tax rates by income group for 2009. These are average effective tax rates, calculated as income taxes paid divided by adjusted gross income (AGI). The chart shows that taxpayers with incomes above $500,000 had tax rates averaging about 25 percent. Middle-income taxpayers had tax rates of half of that or less. A few years ago, Buffett claimed that his secretary earned $60,000 and paid a 30 percent tax rate. But looking just at income taxes, that seems way off. (Note that this data doesn’t include the “refundable” portion of tax credits, which wipes out taxes for many people at the bottom end). 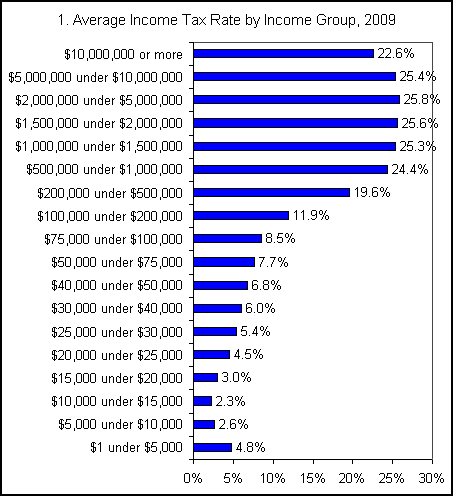 Perhaps Buffett was referring to the fact that his secretary pays a heavy load of payroll taxes in addition to income taxes. But when you look at data which includes all federal taxes, the system is still highly graduated with much higher rates at the top end.

Chart 2 shows CBO data for 2007 on average effective tax rates, including essentially all federal taxes—individual income, corporate income, payroll, and excise. Buffett’s secretary would fit into the fourth group in the chart, where the average tax rate was 17.4 percent. So if she is really paying 30 percent, then Buffett needs to show her some of his tax-reduction tricks. Note in the chart that Buffett’s peers in the top 1 percent paid an average rate of 29.5 percent, which is double the rate paid by middle-income taxpayers. 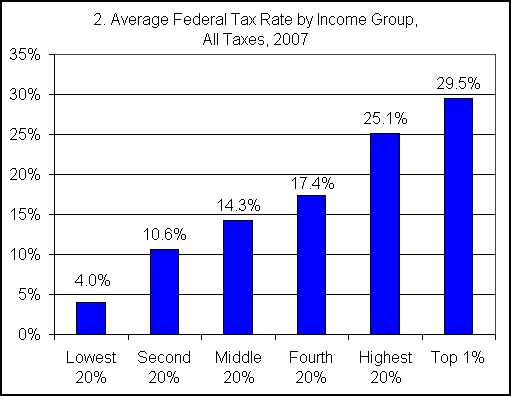 In 2007, Buffett said that he paid a 17.7 percent tax rate. Alan Reynolds notes that Buffett earns large amounts of capital gains, which are taxed at a maximum federal rate of 15 percent. People in the top income groups do report a lot of capital gains, which reduces their overall effective tax rate. However, capital gains are included in chart 1, above, and you can see that the top income groups still pay much higher tax rates than others on average. One reason is that a large amount of income at the top is small business income, which is hit by ordinary income tax rates of up to 35 percent.

You have to go to the extreme top end of the income spectrum in order for capital gains realizations to really push down overall effective tax rates. The IRS publishes data for the 400 highest-income taxpayers. For these taxpayers, the average effective income tax rate in 2008 was 18.1 percent.

Since the beginning of the income tax, we have nearly always had special treatment of capital gains for some very good reasons, as I discuss here. I point out that virtually all high-income nations recognize that capital gains are different and that special rules are needed. A number of OECD nations have long-term capital gains tax rates of zero, including New Zealand and the Netherlands.

Another important aspect to this debate regards the link between capital gains and dynamism in the economy and dynamism in tax payments. The political left makes it seem as if there were a permanent aristocracy at the top end of the income spectrum in America. However, IRS data show the exact opposite—the top 400 are a highly dynamic group. Notice first in IRS Table 1 that 57 percent of AGI for these taxpayers is capital gains. That is a key reason why the people in this group are constantly changing—large capital gains realizations are occasional events that rocket people to the top of the AGI heap. One example is when an entrepreneur sells her successful and longstanding business and retires.

The last table in the IRS document reveals the dynamism. The IRS traced the identities of all taxpayers who showed up in the top 400 anytime between 1992 and 2008. The IRS found that there were a huge 3,672 different taxpayers who appeared during that timeframe. Of these 3,672, fully 73 percent only appeared once in the top 400! And 85 percent appeared only once or twice.

So at the top end of our capitalist system is a continual generation of new wealth and new wealthy people, and that dynamism reflects the still-energetic and free-wheeling nature of our economy.