In 1980, heated water from a nuclear power plant in Forsmark, Sweden (60.42°N, 18.17°E) began to be discharged into Biotest Lake, an artificial semi-enclosed lake in the Baltic Sea created in 1977 that is adjacent to the power plant and covers an area of 0.9 km2 with a mean depth of 2.5 m. The heated water has raised the temperature of the lake by 6-10°C compared to the surrounding Baltic Sea, but aside from this temperature difference, the physical conditions between the lake and the sea are very similar.

A few years after the power plant began operation, scientists conducted a study to determine the effect of the lake’s increased temperatures on the host-parasite dynamics between a fish parasite, the eyefluke (Diplostomum baeri), and its intermediate host, European perch (Perca fluviatilis). That analysis, performed in 1986 and 1987, revealed that perch in Biotest Lake experienced a higher degree of parasite infection compared to perch living in the cooler confines of the surrounding Baltic Sea (Höglund and Thulin, 1990), which finding is consistent with climate alarmist concerns that rising temperatures may lead to an increase in infectious diseases.

Fast forward to the present, however, and a much different ending to the story is observed.

Nearly three decades later, Mateos-Gonzales et al. (2015) returned to Biotest Lake and reexamined the very same host-parasite dynamic to learn what, if anything, had changed in the intervening time period. According to the team of researchers, Biotest Lake “provides an excellent opportunity to study the effect of a drastically changed environmental factor, water temperature, on the evolution of host-parasite interactions, in a single population recently split into two.” Specifically, it was their aim “to examine if the altered conditions have produced a change in prevalence and/or intensity of infection, and if these potential variations in infection have led to (or might have been caused by) a difference in parasite resistance.”

To accomplish their objective, Mateos-Gonzales et al. compared the prevalence and intensity of parasitic infection in perch populations growing in warmer Biotest Lake versus the natural population from the surrounding cooler Baltic Sea in 2013 and 2014. They also conducted a controlled laboratory experiment in which they exposed perch from both locations to D. baeri, comparing their infection rates.

The field results indicated that fish from the warmed Biotest Lake had a much lower parasite infection rate than fish from the Baltic Sea. In fact, the authors report that the “intensity of infection in Baltic fish was on average 7.2 times higher than in the corresponding Biotest fish” (italics added, see figure below). In addition, Baltic fish were found to acquire “slightly more parasites as they age,” whereas Biotest fish did not.

With respect to the laboratory tests, Mateos-Gonzales et al. report that exposure to parasites “did not have an effect in fish from the Biotest Lake, but it did in fish from the Baltic Sea,” increasing their intensity of infection by nearly 40 percent. 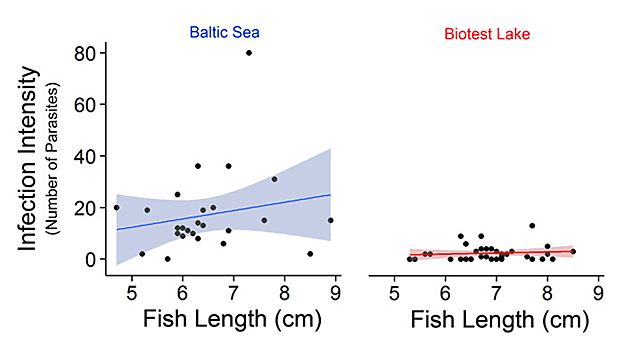 In discussing their findings, Mateos-Gonzales et al. write they present “a dramatic contrast” to those reported nearly three decades earlier when Biotest fish were infected at a rate of “almost twice” that of Baltic fish. Compared to 1986/87, the intensity of parasitic infection in Biotest fish has fallen almost 80%, whereas it has decreased only slightly in Baltic fish. Consequently, the authors conclude their results illustrate “how an increased temperature has potentially aided a dramatic change in host-parasite dynamics,” and that change, it might be added, has clearly been for the better. Furthermore, Mateos-Gonzales et al. note this rapid and surprising reversal of fortunes has “direct implications for consequences of global climate change, as they show that fast environmental changes can lead to equally rapid evolutionary responses.” Indeed they can; and such responses need to be included in predictive models that “highlight the importance of empirical research in order to validate future projections” of host-parasite interactions in a world of rising temperatures. Clearly, the future outlook on host-parasite interactions has the potential to be much more favorable than climate alarmists often make it out to be.

References Höglund, J. and Thulin, J. 1990. The epidemiology of the metacercariae of Diplostomum baeri and D. spathaceum in perch (Perca fluviatilis) from the warm water effluent of a nuclear power station. J Helminthol. 64: 139-150.