Yesterday, Jason Samenow of the Washington Post asked me for a brief comment on NOAA’s upcoming pronouncement of the warmest year in their record. Jason runs CapitalWeather (or “CapitalWeatherGang” or “CWG” to those in the know in Washington) for the Post, and it is a very popular site as he may be the best forecaster around when it comes to D.C.’s hard‐​to‐​predict winter weather.


Here is what I sent to him:

Whether or not a given year is a hundredth of a degree or so above a previous record is not the issue. What IS the issue is how observed temperatures compare to what has been forecast to happen. John Christy and Richard McNider, from the University of Alabama (Huntsville), recently compared climate model projections to observed lower atmospheric temperatures as measured by two independent sources: satellites and weather balloons, and they found that the average warming predicted to have occurred since 1979 (when the satellite data starts) is approximately three times larger than what is being observed. CWG would give itself probably a D- if it forecast 12 inches of snow and got only 3. 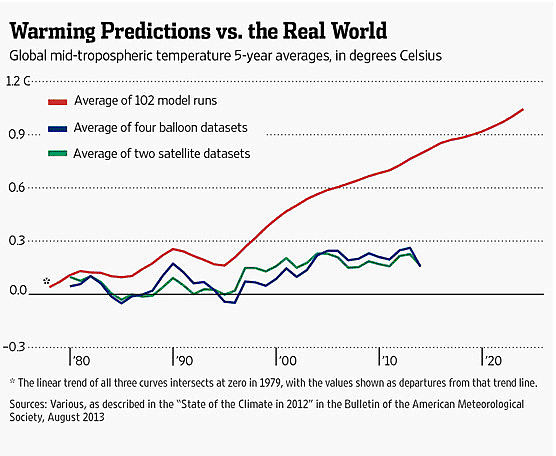