The War against Cash, Part I

That may seem an odd assertion given that they love spending money (other people's money, of course, as illustrated by this cartoon).

But what I'm talking about is the fact that politicians get upset when there's not 100 percent compliance with tax laws.

They hate tax havens since the option of a fiscal refuge makes confiscatory taxation impractical.

They hate the underground economy because that means hard-to-tax economic activity.

And they hate cash because it gives consumers an anonymous payment mechanism.

Let's explore the animosity to cash.

It's basically because a cashless society is an easier-to-tax society, as expressed by an editorial from the U.K.-based Financial Times.

...unlike electronic money, it cannot be tracked. That means cash favours anonymous and often illicit activity; its abolition would make life easier for a government set on squeezing the informal economy out of existence. ...Value added tax, for example, could be automatically levied. ...Greece, in particular, could make lemonade out of lemons, using the current capital controls to push the country’s cash culture into new habits.

And some countries are actually moving in this direction.

J.D. Tuccille looks at this issue in an article for Reason.

Peter Bofinger of the German Council of Economic Experts...wants to abolish the use of cash... He frets that old-fashioned notes enable undeclared work and black markets... So rather than adjust policy to be more palatable to the public, he'd rather leave no shadows in which the public can hide from his preferred policies. The idea is to make all economic activity visible so that people have to submit to control. Denmark, which has the highest tax rates in Europe and a correspondingly booming shadow economy, is already moving in that direction. ...the Danmarks Nationalbank will stop internal printing of banknotes and minting of coins in 2016. After all, why adjust tax and regulatory policy to be acceptable to constitutents when you can nag them and try to reinvent the idea of money instead?

By the way, some have proposed similar policies in the United States, starting with a ban on $100 bills.

Which led me to paraphrase a line from the original version of Planet of the Apes.

Notwithstanding my attempt to be clever, the tide is moving in the wrong direction. Cash is beginning to vanish in Sweden, as reported by the New York Times.

...many of the country’s banks no longer accept or dispense cash. Bills and coins now represent just 2 percent of Sweden’s economy, compared with 7.7 percent in the United States and 10 percent in the euro area. This year, only a fifth of all consumer payments in Sweden have been made in cash, compared with an average of 75 percent in the rest of the world, according to Euromonitor International. ...Cash machines, which are controlled by a Swedish bank consortium, are being dismantled by the hundreds

Though the article notes that there is some resistance.

Not everyone is cheering. Sweden’s embrace of electronic payments has alarmed consumer organizations and critics who warn of a rising threat to privacy and increased vulnerability to sophisticated Internet crimes. ...The government has not sought to stem the cashless tide. If anything, it has benefited from more efficient tax collection, because electronic transactions leave a trail; in countries like Greece and Italy, where cash is still heavily used, tax evasion remains a big problem. Leif Trogen, an official at the Swedish Bankers’ Association, acknowledged that banks were earning substantial fee income from the cashless revolution.

What matters, by the way, is not the degree to which consumers prefer to use alternatives to cash.

That's perfectly fine, and it explains much of what we see on this map. 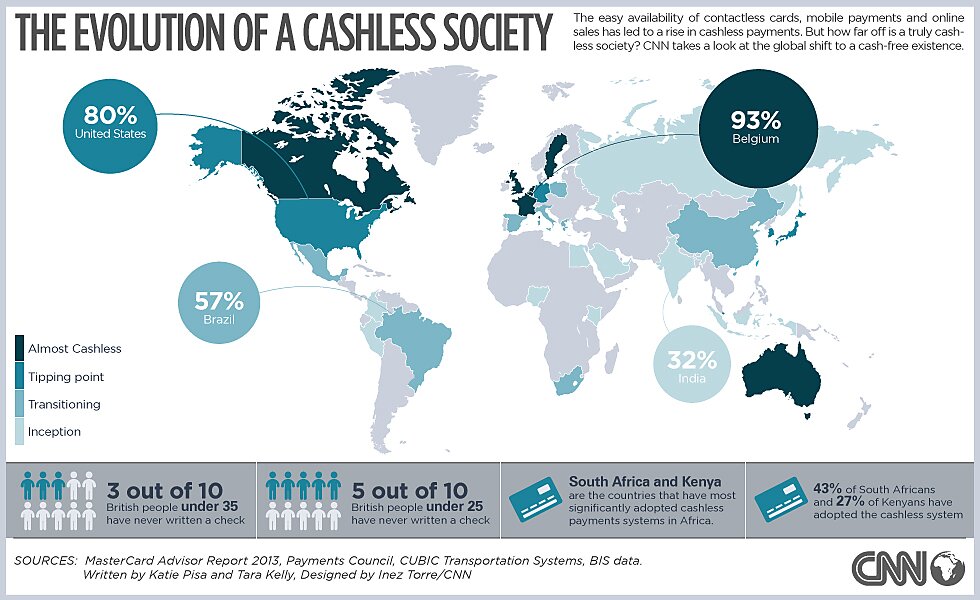 The problem is when governments use coercion to limit and/or abolish cash so that politicians have more power. And this is why the French (gee, what a surprise) are trying to crack down on cash.

Writing for the U.K.-based Telegraph, Matthew Lynn mentions the new policy and France and also explores some worrisome implications of this anti-cash trend.

France is banning the use of cash for transactions worth more than €1,000...part of a growing movement among academics and now governments to gradually ban the use of cash completely. ...it is a “barbarous relic”, as some publications loftily dismiss it. The trouble is, cash is also incredibly efficient. And it is a crucial part of a free society. There is no convincing case for abolition. ...When it comes to creeping state control, it is no surprise to find the French out in front. ...A cashless economy would be far easier to both tax and control. But hold on. ...cash is far too valuable to be given up lightly. ...While terrorists and criminals may well use cash to buy weapons, or deal in drugs, it is very hard to believe that they would not find some other way of financing their operations if it was abolished. Are there really any cases of potential jihadists being foiled because they couldn’t find two utility bills (less than three months old, of course) in a false name to open an account?

Amen. Banning cash to stop terrorists is about as foolish as thinking that gun control will thwart jihadists.

In any event, we need to consider trade-offs. Chris Giles highlighted that issue in a piece for the Financial Times.

...an unfortunate rhetorical echo of Maoist China. It is illiberal... Some argue there would be beneficial side effects from abolishing notes and coins through the regularisation of illegal activities. Really? ...Cash would have to be abolished everywhere and the BoE does not have those powers, thankfully. The anonymity of cash helps to free people from their governments and some criminality is a price worth paying for liberty.

Though I suppose we should grudgingly give politicians credit for cleverly trying exploit fear to expand their power.

But never forget we're talking about a bad version of clever. If they succeed, that will be bad news for freedom.  J.D. Tuccille of Reason explains in a second article why a growing number of people prefer to use cash.

Many Americans happily and quietly avoid banks and trendy purchasing choices in favor of old-fashioned paper money. Lots of business gets done that way...the Albuquerque Journal pointed out that over a third of households in the city either avoid banks entirely (the “unbanked”) or else keep a checking account but do much of their business through cash, check-cashing shops, pawn shops, money orders, and other “alternative financial products” (the “underbanked”). A few weeks earlier, the Kansas City Star reported a similar local situation... Twenty-six percent cite privacy as a reason for keeping clear of banks – bankers say that increased federal reporting and documentation requirements drive many customers away. “A lot of people are afraid of Uncle Sam,” Greg Levenson, president and CEO of Southwest Capital Bank, told the Albuquerque Journal. ...most people aren’t idiots. When they avoid expensive, snoopy financial institutions, it’s because they’ve decided the benefits outweigh the costs.

Very well said, though I'd augment what he wrote by noting that some of these folks probably would like to be banked but are deterred by high costs resulting from foolish government money-laundering laws.

More on that later.

Let's stay with the issue of whether cash should be preserved. A business writer from the U.K. is very uneasy about the notion of a society with no cash.

...tax authorities have become increasingly keen on tracking everything and everyone to make absolutely certain that no assets slip under their radars. The Greeks have been told that, come 2016, they must begin to declare all cash over €15,000 held in safes or mattresses, and all precious stones, gold and the like worth more than €30,000. Anyone else think there might be a new tax coming on all that stuff? ...number-crunchers...are maddened by the fact that even as we are provided with lots of simple digital payment methods we still like to use cash: the demand for £20 and £50 notes has been rising. ...They are maddened because “as untraceable bearer instruments, it is not possible to locate where banknotes are being held at any one time”... Without recourse to physical cash, we are all 100% dependent on the state-controlled digital world for our financial security. Worse, the end of cash is also the end of privacy: if you have to pay for everything digitally, every transaction you ever make (and your location when you make it) will be on record. Forever. That’s real repression.

She nails it. If politicians get access to more information, they'll levy more taxes and impose more control.

And that won't end well.

Last but not least, the Chairman of Signature Bank, Scott Shay, warns about the totalitarian temptations that would exist in a cash-free world. Here's some of what he wrote in a column for CNBC.

In 2010, Visa and MasterCard, bowed to government pressure — not even federal or state law — and banned all online-betting payments from their systems. This made it virtually impossible for these gambling sites to continue operating regardless of their jurisdiction or legality. It is not too far-fetched to wonder if the day might come when the health records of an overweight individual would lead to a situation in which they find that any sugary drink purchase they make through a credit or debit card is declined. ...there is...a sinister risk...a cashless society would certainly give governments unprecedented access to information and power over citizens.

And, he warns, that information will lead to mischief.

...the U.S. government is already using its snooping prowess and big-data manipulation in some frightening ways. ...the U.S. government is becoming very fond of seizing money from citizens first and asking questions later via "civil forfeiture." Amazingly, the government is permitted by law to do this even if it is only government staff members who have a suspicion, not proof, of wrongdoing. ...In recent years, it made it increasingly difficult for companies to operate or individuals to transact by adding compliance hurdles for banks wishing to deal with certain categories of clients. By making it too expensive to deal with certain clients or sending the signal that a bank should not deal with a particular client or type of client, the government can almost assuredly keep that company or person out of the banking system. Banks are so critically dependent on government regulatory approval for their actions... It is easy to imagine a totalitarian regime using these tools to great harm.

But there are very good reasons, when dealing with government, to fear that the slope actually is slippery.

Let's close by sharing my video on the closely related topic of money laundering. These laws and regulations have been imposed supposedly to fight crime.

But we've slid down the slope. These policies have been a failure in terms of hindering criminals and terrorists, but they've given government a lot of power and information that is being routinely misused.

P.S. The one tiny sliver of good news is that bad money laundering and know-your-customer rules have generated an amusing joke featuring President Obama.

P.P.S. If politicians want to improve tax compliance in a non-totalitarian fashion, there is a very successful recipe for reducing the underground economy.